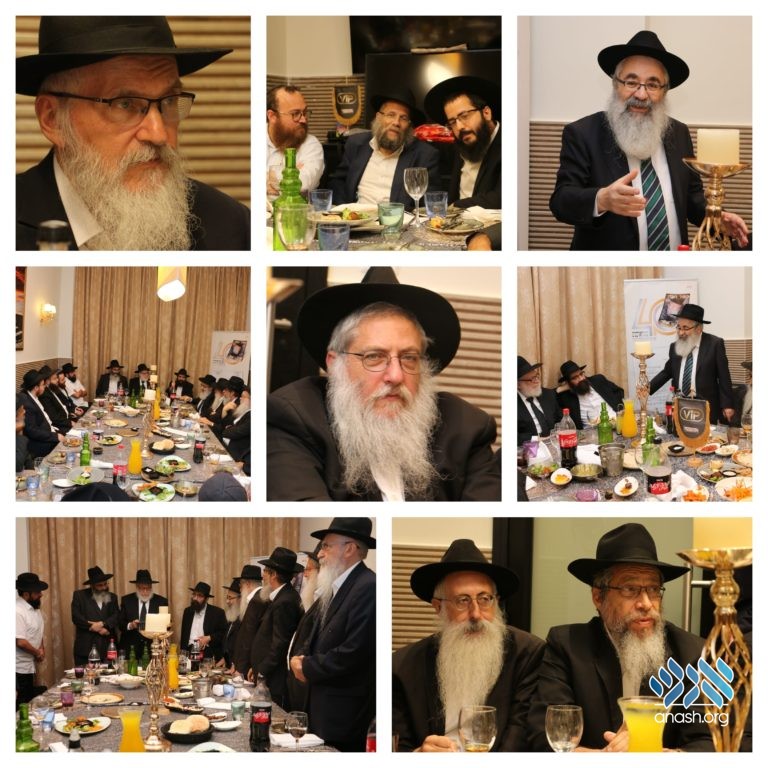 Members of the board of “Kfar Chabad” Magazine gathered Thursday night in Bnei Brak for a farbrengen marking the beginning of the 40th year since the first of the magazine first appeared. This was the the first time that all the writers and the members of the editorial board sat together.

At the farbrengen, suggestions and ideas were passed around, memories were shared, and stories highlighting how the Chabad mouthpiece has been influential over the years in bringing the message of the Rebbe and Chabad to the masses were told.

In recent years, “Kfar Chabad” has experienced an increase in popularity with additional sections added to the magazine, including the very popular “LeBanot” section for teen girls, and an expanded news section. Very popular Chabad weeklies like the “Hiskashrus” and Horo’oh U’Mishpat” have also been added to the magazine package.

Editor and Founder Rabbi Aron Dov Halperin opened the evening by recounting the days and weeks that led up to the creation of the “Kfar Chabad,” the challenges facing the magazine in its early days, and the Rebbe’s involvement in the periodical’s infancy and beyond. “The fact that the Rebbe was so involved in “Kfar Chabad” is both an honor and an obligation to us,” Rabbi Halperin said. “The brochos that the Rebbe gave and gives to Kfar Chabad is what accompanies us and gives us the strength to continue and go from strength to strength,” he added.

Shliach and columnist Rabbi Yossi Chitrick read the Rebbe’s letter to the editorial board that was sent in honor of the 500th issue in 5752/1991. In the letter, the Rebbe writes how the magazine has a direct influence on readers, and the Rebbe heaps brochos and good wishes on those that are involved in the publishing, as well as the readers. In addition, the Rebbe requests that all efforts be made for the magazine to expand its scope of influence.

Rabbi Arad shared with all how “Kfar Chabad” had a big part is his becoming close to Chabad. In the discussion part of the farbrengen, new ideas for how to improve the magazine for readers all the world were raised.

Attendees received a beautiful gift; a framed copy of the Rebbe’s letter to the 500th issue, enclosed with a picture of the Rebbe and 770.