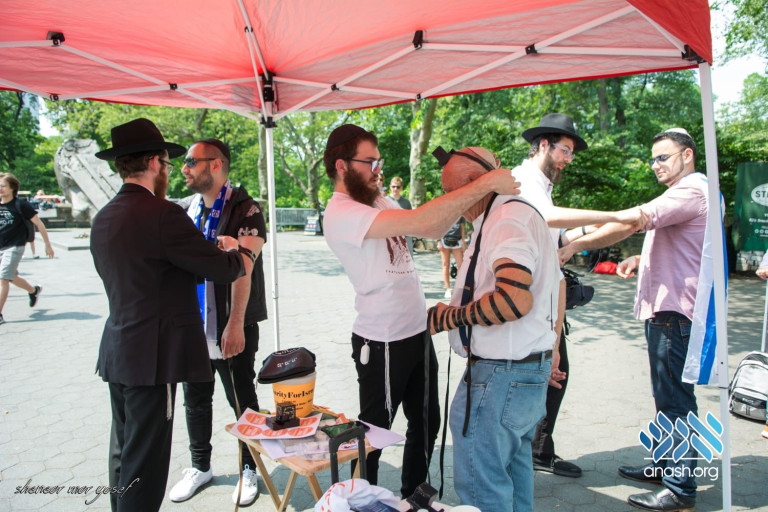 The annual “Salute to Israel” Parade takes place in Manhattan every year on a Sunday around the beginning of June. Thousands of people march, and hundreds of thousands stand on the sides watching. Every politician within a wide radius of Manhattan is there. It is an unbelievable opportunity for mivtzoyim; think of how many people you can pull aside for mivtza tefillin! How many thousands of Neshek kits can be handed out!

Interestingly enough, a directive given to Tzach when the parade first started cautioned against doing mivtzoyim directly in the path of this parade. Preparations were being made for the Mitzvah Tank to go the parade when the following occured:

Rabbi Yossel Katzman, a tankist on the Tzach tank from 5737-5739/1977-1979 recounted the following: “I was in charge of the Mitzvah Tank in those years. A group of yungeleit would go out every Sunday to Manhattan and I would organize the tank for them.”

“When the Israel Day Parade came around, I heard that Rabbi Kasriel Kastel of Tzach had passed down a hora’a, a directive in the Rebbe’s name that the tank should NOT go to the parade to do mivtzoyim. This, in spite of the fact that many Jews open and accepting to Torah and mitzvos would be there.

“I decided to go and ask Rabbi Hodakov myself , and not rely on what I had heard second-hand. He told me: ‘In no uncertain terms, it’s forbidden to participate!’ I told Rabbi Hodakov that we wouldn’t be at the center of the parade; we’d be on the side, where passersby to and from the parade would be.

“He repeated his earlier statement, ‘It’s unequivocally forbidden to stand there! Every passerby will think that Lubavitch is part of the parade. What you may do is stand near the train station a few blocks away. That will give you many opportunities to do mivtzoyim,‘ Rabbi Hodakov concluded.”