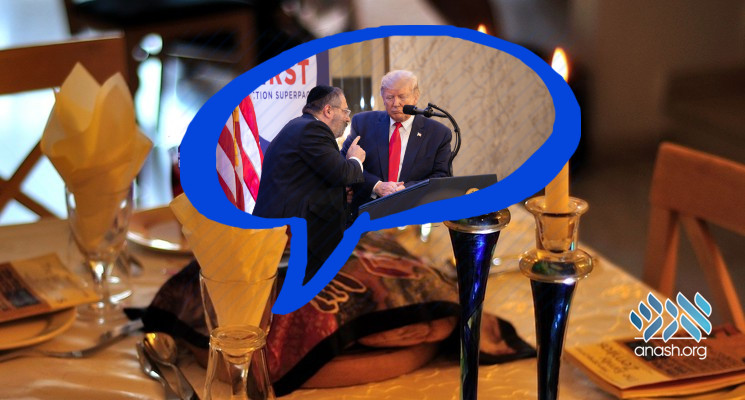 Rabbi YY’s letter about President Trump set off a firestorm of passionate replies from both sides of the aisle. Will you let it dictate your discussions as well?

By: Yisroel Besser for Mishpacha

Rabbi YY Jacobson’s candid, reflective piece on his public role at the fundraiser hosted by the Orthodox community for the current president highlighted the deep divisions that exist within our own community. The letters it generated quivered with similar passion. There is no middle-ground, it seems, on this topic, no one indifferent to Mr. Trump and what he means — or doesn’t mean — to the Orthodox world.

I’m not one to propose a solution to this problem, or any problem that doesn’t involve the question of who finished the can of Pringles meant for the kids’ snack. Early on in my marriage, when my wife started asking me hilchos Shabbos questions, I mastered the art of the thoughtful “you have to know,” respectful of the question and questioner without committing to an answer.

So I cannot tell you if Trump is the Great Defender or the epitome of immorality. But I can share a story.

A few weeks ago, a kiruv-minded friend in Montreal asked if we could host secular college students for a Shabbos seudah. We never had the opportunity before, and my family greeted it with enthusiasm.

I made sure to arrive home right after shul, skipping the usual schmooze after davening. My daughters didn’t engage in intense negotiations over whose turn it was to set the table, and my sons were kind enough to not fall asleep on the couch. (I also upped my game, but that’s not for me to share. Let one of my kids write a column if they want to share my secrets.)

It was a beautiful seudah, with my family enjoying the articulate, sincere young men around their table.

Motzaei Shabbos, my wife got a text message from one of the women involved in working with these students. “Thanks for having the boys, the food was delicious,” she wrote.

The unspoken message was clear. The food was delicious, but we’d done something wrong. We’d blown it some other way.

My wife asked where we’d erred, and the devoted woman assured her that it was fine. Okay, maybe there was one little thing, just a tiny detail, really.

“Your husband spoke nicely about Trump,” she said, “and that’s very offensive to liberal-minded college students. Don’t worry, we were able to calm them down.”

That was the story, and it left me very sad.

It was sad because aside from discussing Trump, other things happened at that seudah.

We made Kiddush. We sang zemiros. We said divrei Torah.

But these students searching for truth heard only about Trump. They missed the power of Kiddush, missed noticing the way a frum couple speaks to each other, didn’t perceive the unique dynamic of children who sit around a table and connect as a family, week after week.

I had blown it by bringing Trump to the Shabbos table.

I feel like many of us have fallen into the same Trump trap as the rest of America, forced to take one side or another. Gifted diplomats and seasoned politicians who’ve spent decades playing both sides and managing to make every audience believe they were with them have now been branded: with or against.

But we’re not politicians, so why go there at all? We all believe the same things, more or less. We all believe HaKadosh Baruch Hu put the man in power. We also believe that the president’s ethics, conduct, and speech are problematic.

So why shrink ourselves and all we have into the same little world where we check off boxes — are we Fox people or CNN people?

This is starting to sound too preachy, so I’m going to get off this soapbox faster than the waiters in Ateres Avrohom clear out the shmorg and slide in the tables, and leave you to continue through the magazine so that you can get to the Kichels — which is what you really want to read, but it doesn’t “pas” to read it first.

But think about it. Trump has managed to dictate the conversation for the rest of the world. I saw an article titled, “How to Survive Thanksgiving Dinner with Your Trump-Voting Relatives.” (Frum version: How to Do a Chanukah Party with Shvoggers Who Learn More Than You, or Make More Money. Or worst of all, shvoggers who do both.)

He shouldn’t have that power over us. We don’t generally put political bumper stickers on our cars, campaign signs on our lawn, or sloganed caps on our heads. (Caps in the frum community are generally for one of the following — Five Towns’ residents, visitors to Uman, Visiting Day, Zaidy’s 70th birthday party, heimeshe people visiting Eastern Europe, and Lakewood people who’ve gotten all their children into school and still have some time until the eineklach and want to celebrate that.)

The rest of the world can argue all they want, but why should we?

Why get passionate about Trump if we have Kiddush?

Originally featured in Mishpacha, Issue 789. Yisroel Besser may be contacted directly at besser@mishpacha.com