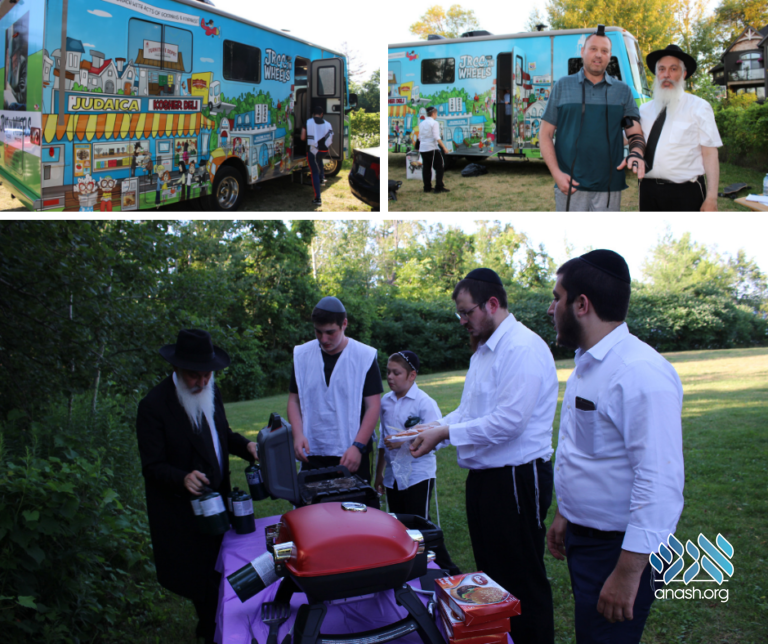 Last month, a contingent of JRCC rabbis took a road trip using the JRCC on Wheels mobile community center to visit Jewish Russian communities in Simcoe County, about 1 hour drive north of Toronto. 150 people of all ages joined the three BBQ’s and get-togethers that took place in the cities of Barrie, Innisfil and Bradford.

The trip was arranged by Rabbi Yoseph Zaltzman, the JRCC’s Senior Rabbi and Founder, who was accompanied by Rabbi Levi Blau and volunteers of the Toronto JRCC Community. It is part of the JRCC’s mandate to serve the needs of Jews from the former Soviet Union.

In 1982, the Rebbe inquired about the welfare of Russian Jews living in the smaller cities. Rabbi Zaltzman proceeded to organize events in these outlying communities, established Exodus Magazine as a way of staying in touch, and eventually formed partnerships with local Jewish organizations to maintain the connections with Russian Jews who do not have access to the day-to-day programs and services of the JRCC.

The JRCC on Wheels initiative is an innovative and exciting extension of the JRCC’s services to remote communities throughout Ontario. The recent visits were widely anticipated and excitedly received by the Simcoe County communities, and were a great opportunity to reconnect, educate, provide outreach services, and meet new members of the community.

“We are so honoured that the rabbis and their friends from Toronto made the trip up here spend time with us,” shared Alina, who joined the gathering with her husband and three young children. “We love living in this area, but it can be so isolating – so few Jews, and even fewer Russian Jews. And we never all get together like this. It was so great for us and especially for our kids to be in a joyous and Jewish atmosphere, and to meet other Jewish families.”

By request from local community leaders, the JRCC rabbis already have similar plans to take the JRCC on Wheels to additional eight communities in the next month, including Georgina, East Gwillimbury, Brampton, Aurora and Woodbridge later this summer. For next summer, they are working on plans to recruit rabbinical student volunteers to man the JRCC on Wheels full-time over the summer, to visit various communities and coordinate events.