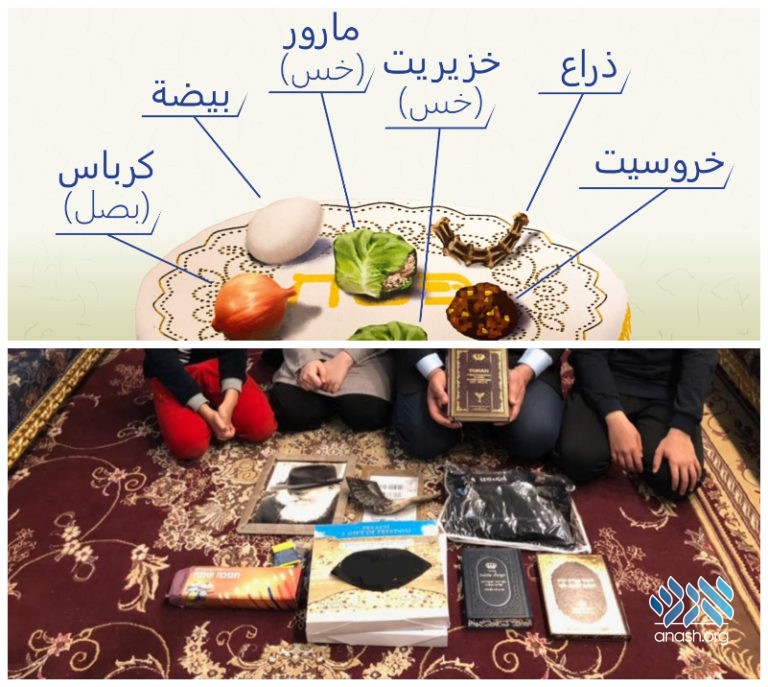 After the assassination of Qassem Soleimani, Yad L’Achim hurried to send matzos to Iraq, allowing them to arrive before coronavirus. Jews in other Arab countries weren’t so fortunate.

Hundreds of Jews living in Arab countries and villages in Yehudah and Shomron received an Arabic-language Haggadah in time for Pesach, courtesy of Yad L’Achim.

The project was handled by the organization’s Shorashim division, set up just over a year ago to reach out to Jews in Arab countries whose mothers or grandmothers married Muslim spouses, and who are interested in learning more about Judaism.

The division is manned by four full-time staffers who are fluent in Arabic. It receives contact details on these Jews from family members who left the Arab countries.

Shorashim uses the information to touch base with these Jews and spark interest in exploring their roots. It also produced two short films, featuring internationally acclaimed Arabic-language poet and singer Ziv Yechezkel, calling on lost Jews to reconnect with their people.

In response to the films, the division began receiving a wave of requests for assistance. Today, it conducts Torah classes using Skype and arranges for one-on-one study.

“The division has three circles,” says Daoud, a pseudonym. “The wider circle includes close to 2,000 Jews to whom we send a few words in advance of the holidays. In the middle circle, there are 400 Jews who regularly enter our site for authentic, timely Jewish material. In the smaller circle, there are 60 Jews who participate in regular Torah classes or learn b’chavrusah. They also receive from us Jewish literature and sacred ritual objects. We’ve created a virtual family which allows for them to get in touch with their Judaism.”

In advance of Pesach, Yad L’Achim published an Arabic-language Hagaddah – a first – that includes explanations and insights into the significance of the exodus from Egypt, and its critical role in the founding of the Jewish nation.

The Haggados were initially meant to be sent physically to these Jews, but due to the coronavirus crisis the organization emailed them as PDFs.

In addition, a number of families received matzos from the organization via a third country. “We are in contact with Jews from Libya, Tunisia, Lebanon, Jordan, Iraq, and Yemen, but only the Jews in Iraq were able to receive matzos,” says one official. “After the assassination of arch-terrorist Qassem Soleimani a few months ago we understood that Iraq may go be entering a state of turmoil and so we hurried to get the matzos to a Jewish family in Mosul, in the hope that they could be distributed in time for Pesach.

“The matzos did indeed arrive before the streets were shut down and this was the first time these Jews celebrated Pesach. To our sorrow, because of the coronavirus, the matzos we sent to Jews in other Arab countries did not reach them before the holiday, but at least they merited to read the Haggadah and feel like free men.”