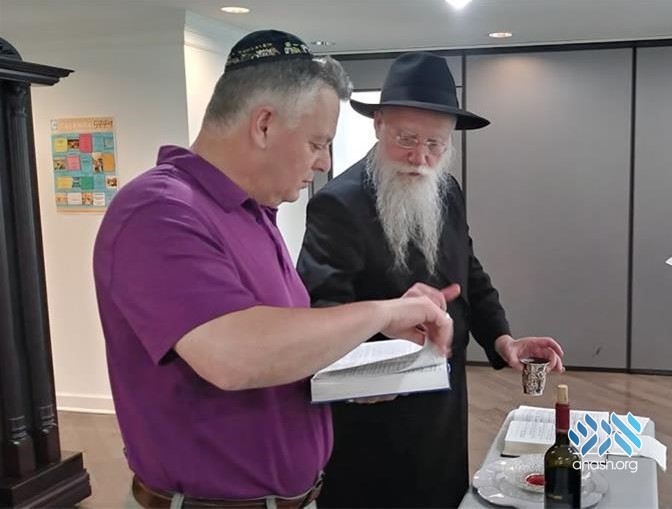 Standing in the sun-drenched sanctuary, large windows showing manicured lawns framed by verdant shrubbery, we could just feel that something special was happening.

In the floor above us, a circumcision was taking place. After nearly 60 years of life, Ilya would soon fulfil the first mitzvah given to Abraham, finally claiming the Jewish heritage that had been his all along.

Rabbi Shmuel Notik, who directs F.R.E.E., the Russian Jewish community of Chicago and Suburbs, says he facilitates an adult circumcision every few weeks, usually a Soviet-born male between the ages of 40 and 80, who has chosen to enter into the Covenant of Abraham.

“In the early ’90s when people were streaming out of Russia by the thousands, we would have as many as 10 circumcisions a week,” recalls Notik, who was born in Moscow and raised in the clandestine Chabad-Lubavitch underground community in Samarkand before emigrating to the United States as a teen. “Several years ago, we began a campaign to provide circumcisions for those who didn’t do it when they first arrived, and we now have, thank G‑d, another circumcision or two every few weeks.”

All told, he estimates that 6,000 Jewish men and boys have been circumcised through his organization.

While Ilya was being operated on, his wife, Alina, shared their life story.

She told how her father had become a member of the Communist Party in order to become a factory manager in her hometown of Bender, then part of the Soviet Union, now in the contested area of Moldova claimed by the mostly unrecognized state of Transnistria. Yet, even his professional accomplishments were not enough to secure his daughter a spot at university in a system that discriminated against Jews.

With no recourse, at the age of 17, she traveled to Kharkov in Soviet Ukraine to further her education. And it was there that she met Ilya, one year her senior.

Like her, Ilya was Jewish (his great-grandfather had been a well-known rabbi of Kharkov, author of the ethical work, Shem Tov, Vilna, 1913), but he knew little about his heritage other than the fact that he was different. Alina said her parents always made sure to get matzah for Passover, and celebrate with honey strudel and attend synagogue on Rosh Hashanah. It could have cost them their careers, but they took that risk and did what they could.

They pair felt an instant kinship and, after several years of courtship, decided to marry. In a dramatic story that spanned three decades and three continents, the two parted ways, married, had children with their respective spouses, divorced and reunited. By that time, her family was in Israel and his in Chicago. To further complicate things, he knew no Hebrew, and she knew just a little English.

But they finally accomplished their dream of building a home together in Chicago.

‘Every Jewish Milestone Should Be Celebrated Beautifully’

We interrupted our conversation when the rabbi came down to inform us that the bris had been completed. As Notik and the mohel heartily congratulated Ilya with lively calls of mazal tov, he smilingly told his wife that he was feeling great.

Then, holding a cup of wine, the rabbi recited the traditional blessings, including the prayer in which the celebrant was given his new Hebrew name, Yosef Yitzchak Meir, after his two grandfathers: Yosef and Yitzchak Meir. Yosef Yitzchak, the rabbi pointed out, was also the name of the Sixth Chabad Rebbe, who had battled valiantly for the survival of Judaism during the darkest days of Stalinist oppression.

We then proceeded to the adjoining room for the traditional festive meal, and I was struck by how elegant it all was. It turned out that Shternie Notik, who has been spearheading FREE together with her husband since 1981, puts special emphasis on celebrating the circumcisions in a most appealing fashion. “Every holiday or Jewish milestone should be celebrated beautifully,” she says, “and especially when an adult Jew reclaims his identity by having a bris. We make sure that a special feeling pervades the entire event, and over time, that itself has inspired many of the guests to go ahead with their own circumcisions.”

As we feasted on an abundance of steak, turkey breast, challah and salads, the rabbi shared that he recently facilitated a circumcision for an 84-year-old man, along with his son and his grandson. Another man at the celebration, David, used the Russian term maladets, “hero,” to describe the men who undergo circumcision in adulthood.

“In my experience, everyone eventually comes around and does the circumcision,” asserts the mohel, Rabbi Levi Heber, who flies to Chicago from New York once or twice a month to perform circumcisions. “The Jewish soul is deeply connected to this mitzvah, and that comes through.”

The conversation flowed naturally between Russian, English and Hebrew.

Having lived in Kharkov until 1995, when he came to the United States for work reasons, Yosef Yitzchak Meir heaped high praise on Rabbi Moshe Moskovitz and his fellow Chabad rabbis in Kharkov, who have rebuilt Jewish life in the city, which has approximately 30,000 Jews. One of his sons, then a student in the Chabad preschool in Kharkov, was circumcised as a child.

“My parents don’t know about my bris yet,” he continued. “They survived the Holocaust by escaping Kharkov until the Russians beat back the Nazis and lived most of their lives under the Communists, and they are still afraid.”

Notik is no stranger to observing Judaism in spite of danger. His grandfather perished in Soviet prison for the “crime” of upholding Judaism, and he vividly remembers the fright his family experienced when a drunk banged on their door late one night. They were sure the secret police were coming for them, too.

In true Russian Jewish fashion, the meal was punctuated with frequent “lechaims” in which blessings were heaped upon those present, their families and anyone else. The blessings for the rabbi included wishes that he soon succeed in procuring the funds to build a new community center—one that would be the pride and joy of the entire Russian-speaking Jewish community in the area.

“The Russian culture is very rich and very strong,” the rabbi explains, “and even children born in America still identify as Russian Jews. They enjoy Russian cuisine, Russian literature, playing chess and everything that they got from their parents.”

‘The Feeling of Coming Home’

A big part of that culture, I learn, is celebrating milestones like this one in an unhurried fashion. As a very occasional drinker, the extra Scotch was beginning to have its effect on me, but I couldn’t leave until I had completed my interviews.

As we concluded, the mohel, who had a few minutes before David would take him to the airport,told me how he was exposed to the world of circumcision. “In 1990, I went to Moscow to serve as head counselor in the Jewish summer camp,” he recalls. “We knew very little Russian and the kids knew virtually no English, but they so wanted to embrace Judaism.”

With just poor Soviet-era anesthesia, boy after boy committed to undergo circumcision—no easy feat for a young man entering adolescence. “They saw how we lived as Jews, and they wanted it for themselves.”

Upon returning to America that fall, Heber observed how circumcision was being done for the many Russian Jews then arriving in New York. He returned to Moscow the following summer with state-of-the art anesthetics, sutures, fine needles and medical know-how, which he passed on to the longtime mohel of Moscow, Avrohom Genin.

Today, he has the pleasure of performing circumcisions on the sons of his erstwhile campers, seeing how the seeds of Judaism planted nearly three decades ago have grown into vibrant family trees.

Even though he has performed thousands of circumcisions—sometimes in three states in a single day—he says that each one is special, especially when it involves an adult. “There is the feeling of finally coming home, fixing something that has been waiting to be corrected all along.”