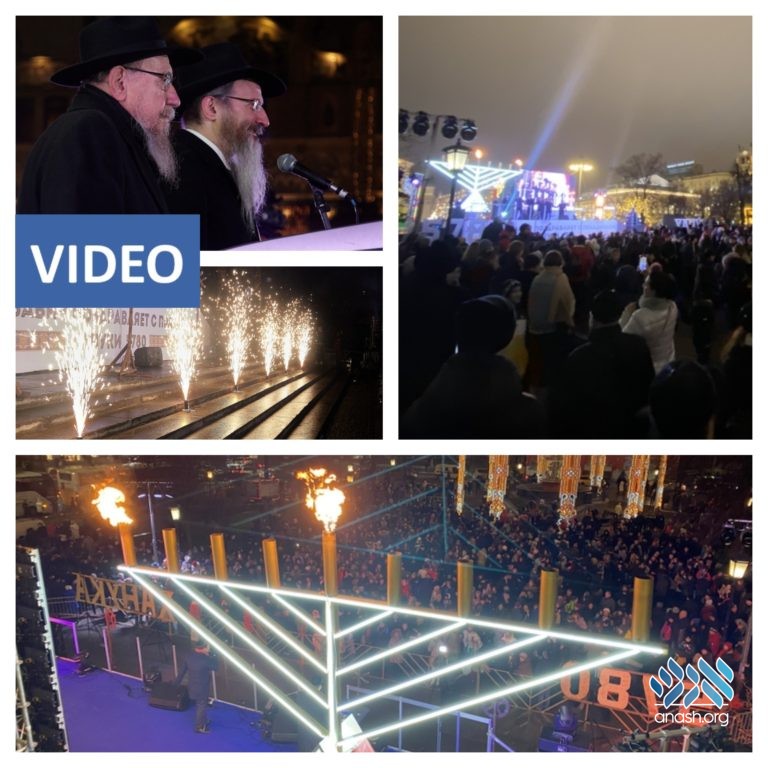 Once unthinkable, the Red Square in Moscow hosted its 30th Chanukah party this year, with a large Menorah facing the Kremlin light by Chief Rabbi Berel Lazar.

His voice echoed throughout the Red Square as Rabbi Berel Lazar, Chief Rabbi of Russia recited the three brachos while standing in a forklift over the statue of Karl Marx at the Kremlin gates. The large crowd emotionally answered a resounding “Amen!”

This is the thirtieth year that the Chanuka candles are proudly lit in the public square. It began in 5750, when the Lubavitcher Rebbe zi”a, promised that it will be a “Year of Miracles”. That was when the Jews of Russia began seeing open miracles in all matters of Torah observance, as Yiddishkeit began to return to its former glory in Russia.

As the first candle was lit in Moscow, this was the opening shot for many more public menorah lightings throughout Russia. Large and small events,that will be held during all eight days of Chanuka.

The grand event began with a video clip summing up 30 years of public menorah lightings in Russia’s capital, including one with the president, Mr. Vladimir Putin in attendance.

The organizer of the event, Director of Moscow’s Jewish community, Rabbi Mordechai Weisberg, arranged that the menorah’s stage be higher than usual this year, and with permission from Moscow’s police, the area around the stage was enlarged in order to accommodate the crowds who came from all over the city to take part in this emotional event.  With live coverage from many media outlets, this was a true Pirsumei Nisa, especially as the Rebbe was seen on huge screens during the speeches. The candle lighting was followed by lively dancing to the professional music of Roli Dikman and Motti Cohen who flew in from Israel. The joyous dancing and singing lasted for about two hours, thawing and warming up the cold outside.