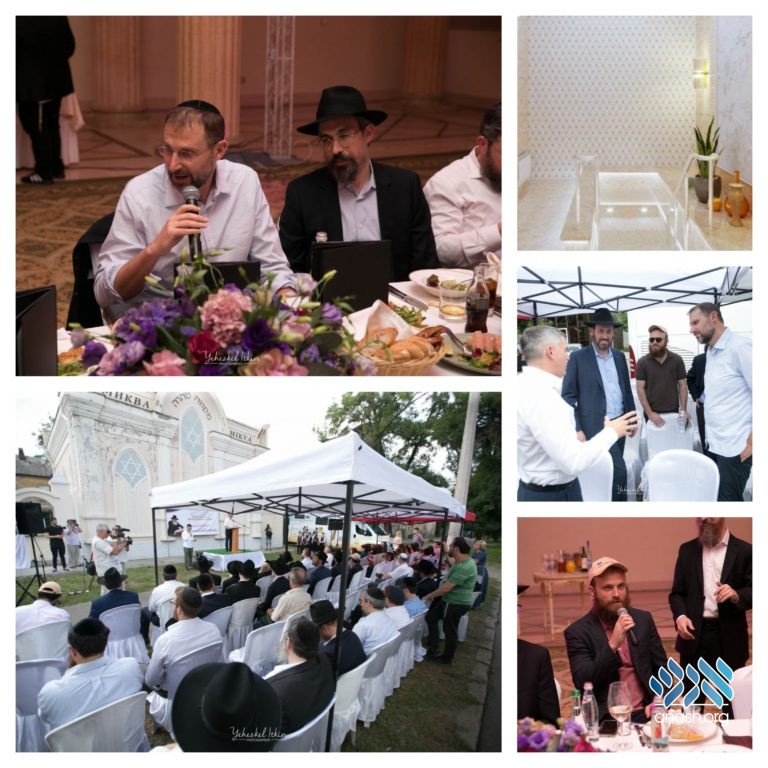 Last summer, a group of JEM supporters from around the world with an interest in the Rebbe’s life came together for a seven-day journey through four cities of the Rebbe’s youth. Inspired by JEM’s newly released book Early Years and the accompanying research that brought to life a treasure trove of information surrounding the Rebbe’s early life, the trip’s goal was to experience those events in the locations they occurred.

Rabbi Leibel Shapiro, prominent Chabad rabbi and Rosh Yeshiva in Miami, joined the group as scholar-in-residence, and captivated everyone throughout the trip with his farbrengens, stories, and insights.

In Nikolayev, the first station of the trip, the group took part in a ceremony, along with the city’s mayor, in naming a prominent road “Schneerson Street,” in honor of the Rebbe – one of the city’s most prominent and famous native.

In coordination with Nikolayev Shliach Rabbi Sholom Gottlieb, the tour visited the location of the Rebbe’s childhood home, where they began the writing of a new Torah scroll. They also visited the home of the Rebbe’s maternal grandparents Rabbi Meir Shlomo and Rochel Yanovsky (where the Rebbe spent considerable time as a child), and the cellar where the Rebbe, as a three-year-old, calmed and comforted children during the pogroms of 1905, and other locations.

When they visited Nikolayev’s mikveh, which is located adjacent to the synagogue of the Rebbe’s great grandfather Rabbi Avraham David Lavut, an unfortunate sight met their eyes. The beautiful mikveh, dedicated by the Omri family in honor of their parents Mr. Zion and Nizdari Omri, was suffering from major mold due to a problem with the plumbing and ventilation.

Inspired by the energy of the trip, a number of supporters resolved to sponsor the renovation of the mikveh, a project that would cost roughly $75,000.

Throughout the year, discussions went back and forth between Rabbi Gottlieb and the donors, as plans were floated and finalized.

On the twentieth of Av, the Yahrzeit of the Rebbe’s father, coinciding with the one-year anniversary of the life-changing trip, Yerachmiel Jacobson challenged the group to make the project a reality. According to one of the participants who made a major contribution to the project, but requested to remain anonymous, “The trip was an inspiring, once-in-a-lifetime experience. The Rebbe taught us to channel inspiration and leave a mark, so we will contribute to the Jewish community in the Rebbe’s birthplace.”

Rallied, the donors came through that very day. Rabbi Shmaya Krinsky of Keren Hachomesh, the fund established by the Rebbe in the Rebbetzin’s memory to support mikvaos (and other such initiatives), arranged a grant for the mikveh. By nightfall, the commitments were settled and a plan of action was set in motion.

“The city of Nikolayev has a rich heritage for every chosid of the Rebbe,” declared Rabbi Gottleib. “This group of supporters came to visit and experience, but they have left a permanent effect on the city. Soon, the city will once again have a mikveh worthy of its storied history.”