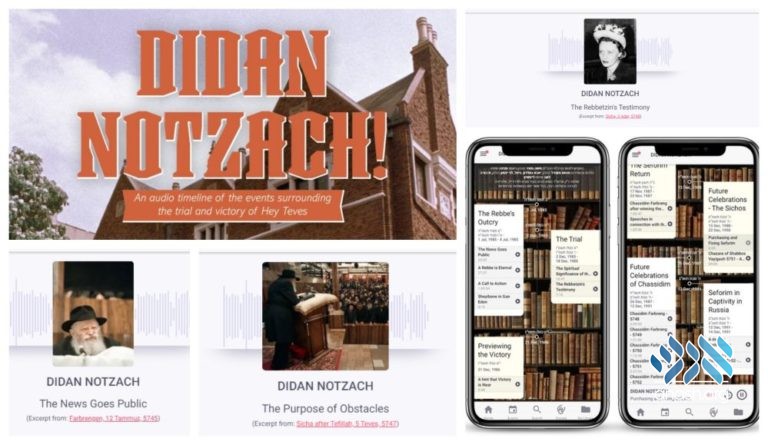 A collection of audios portraying the sequence of events surrounding Hei Teves has been released alongside a new video presentation from JEM.

A central theme of celebrating any day on the Chassidisher calendar is נזכרים ונעשים, recounting the story of the day and reliving it anew.

From the Rebbe’s first public references to the theft of Lubavitch’s treasured manuscripts in the summer of 1985, it was clear that this was not merely a legal challenge, but also as a spiritual struggle over the soul of the movement, and over the very definition of what a Rebbe is.

In preparation for Hei Teves, Ashreinu has produced an audio roundup of all the relevant sichos, farbrengens and events surrounding the trial and victory of Hey Teves.

As the theft became known, and efforts to settle the matter quietly were ignored, the Rebbe made the matter public. The Rebbe would speak about the theft on a total of 5 occasions, 3 of which were recorded on tape and are included here in the beginning of the timeline. In an urgent tone, the Rebbe begs all Chassidim to make this a personal matter and do all they can to ensure the Seforim return to their rightful home. The Rebbe explains in these Sichos the fallacy of the argument that the library is subject to inheritance by the Friediker Rebbe’s descendants, passionately explaining how the Rebbe and his possessions are eternal.

During the difficult period of the trial, while the Rebbe visited the Ohel almost every day, he urged the Chassidim to increase in joy, specifically over the days of Chanukah. The Rebbe himself held 3 Farbrengens in a row, on Shabbos, Motzei Shabbos Zos Chanukah, and the night following Zos Chanukah. At these occasions, the Rebbe explained the spiritual significance of the trial unfolding in the courtroom. Drawing parallels to the case against the Alter Rebbe during his arrest, the Rebbe declared that the accusations themselves serve as a lesson in what our response must be – increasing the activity of Agudas Chasidei Chabad even more.

After a year of deliberations and delay, the verdict finally came through on Hei teves. Didan Notzach – Victory is ours! A week of joyous celebrations commenced, and the Rebbe would address the Chassidim each night. The recordings of the Rebbe’s Sichos, as well as the Chassidim’s Farbrengens of that week, can be heard on the timeline.

The timeline also covers the subsequent celebrations of Hei Teves throughout the years, by highlighting the Rebbe’s Sichos, and the Farbrengens in 770 each year. Also included is Chazara of the Shabbos Farbrengens on or around Hey Teves in the years following the victory.

In addition to the audio timeline, JEM released a new video presentation which pulls back the cover on the painful yet fascinating saga. The Rebbe’s ultimate victory – or in the Rebbe’s words, “the victory of the books” – and the celebration that followed have been forever enshrined in the narrative of the Lubavitch movement in modern times.

Click here for the new audio timeline of the events of Hei Teves.