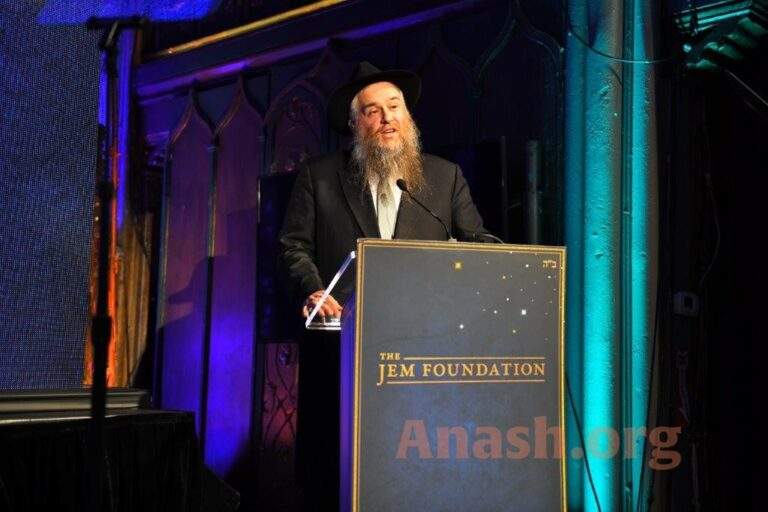 Over 200 members and supporters of the JEM Foundation from around the world gathered in New York City for the inaugural JEM Foundation International Gala.

Launched a little over a year ago, the JEM Foundation is comprised of some 60 visionary member couples who have committed themselves to sharing the Rebbe’s teachings and inspiration with the world through video, audio and photography. The foundation supports JEM’s ongoing activities, as well as funds new projects and innovation by investing in JEM’s people, cutting edge technology, and long-term content investment.

The gala was held in the stunning Angel Orensanz venue in Manhattan. The historic hall — turned modern — truly set the tone for an evening that was a blend of the past, present and future.

The evening, expertly planned and directed by Ronen Peled-Hadad of Aranen Productions,featured presentations highlighting the Rebbe’s reach to the world through technology, stories of the launch of various technology projects, as well as several beautiful talks of the Rebbe.
C

The evening was enthusiastically emceed by Rabbi Yosef Chaim Kantor, head shliach and chief rabbi of Thailand. Laying out the Foundation’s vision of bringing the Rebbe, his voice, and image, to every single Jew and every person Rabbi Elkanah Shmotkin, director of JEM, underscored that “the solution to all the world’s problems is right here. We just need to unpack it all.” Every time we’ve worked on bringing the Rebbe to an audience, it has worked. With thought and hard work,” he continued, “the Rebbe’s solutions to the world’s problems can be presented in his own voice, and in a practical way that people can apply to their own lives and the world around them.”

In one of the more emotional moments of the night, Foundation members were given the opportunity to acknowledge the entire JEM team for the incredible work they do. The New York based members of the team were called to the stage, and were given a standing ovation.

A high point of the evening was when Mr. George Rohr, philanthropist and Honorary Chairman of the foundation, addressed the gathering. Laying out the business case for supporting JEM’s work, Mr. Rohr explained why he is such an enthusiastic supporter of the Foundation, and the reasons he is proud to serve as its honorary chairman.

“The Rebbe was able to spark the unprecedented renaissance of Jewish life that the world has witnessed over the past 70 years,” Mr. Rohr explained. “The great multiplier here,” he continued, “is that never before in history have we had the ability to reach literally anyone in the world with a click of a button. Through technology, we are able to transmit the Rebbe’s Torah teaching, his inspiration, and his y. Never has there been the ability to take something so potent and pair it together – through vision, hard work, and creativity – with technology,” resulting in impact.

He then urged every member to double their contribution in the coming year. As a result of Mr. Rohr’s impassioned call to action, many members upped their membership levels, and guests opted to join the Foundation.

A highlight of the evening was a live demonstration of Connection Point, one of seven new projects made possible by the JEM Foundation in the past year. The interactive program enables children to learn directly from the Rebbe, with tailor made videos and exciting prizes. The experience was led by the project’s director, Rabbi Levi Plotkin, along with Leibel Paltiel of Port Washington and Mussie Wolf of Chicago.

Rabbi Mendel Lifshitz, of Boise Idaho, also shared a powerful story with the guests on the power of sharing the Rebbe with the world. He related that when he traveled to Washington DC to lobby Idaho Senator Jim Risch to vote for prison reform, the senator was reluctant at first, having been a prosecutor all his life. But when Rabbi Lifshitz showed him a video of the Rebbe speaking about the purpose of prison and the justice system. the senator was most impressed and moved. He told Rabbi Lifshitz that he had changed his mind and decided to vote for the bill

The guests left the evening inspired and motivated to get involved, break open new frontiers, and share the Rebbe’s image, voice, and inspiration with the world through their membership.

To join the Foundation or to learn more, please email [email protected].