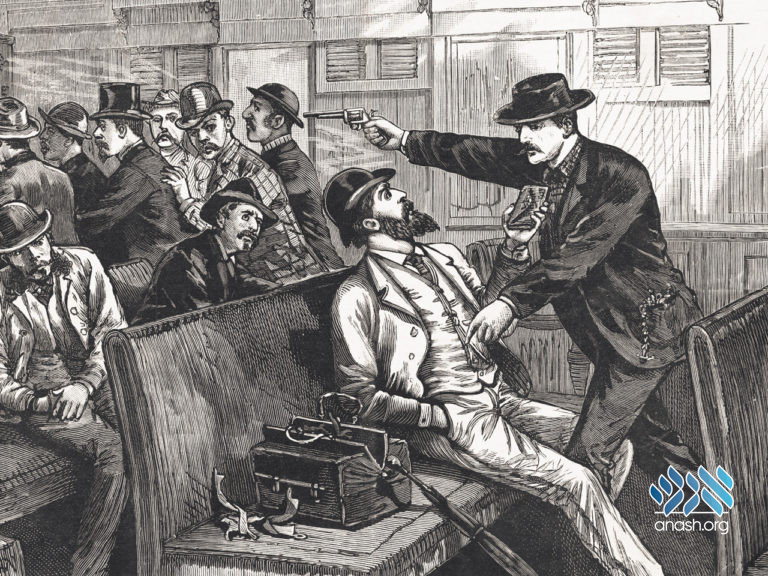 Sometimes it’s not about what you have to do, but about what is essential to your life. Rabbi Akiva Wagner on current events.

R’ Yechezkel “Chatche” Feigin was an exemplary chosid, an oived and a maskil who was a mashpia in Tomchei Tmimim, and also served as the personal secretary to both the Rebbe Rashab and, subsequently, to the Frierdige Rebbe. (On the 9th of Tamuz of 5701, he was brought into the shul in Riga together with other local Jews and murdered by the Nazis, HY”D).

Once, in 5677, the Rebbe Rashab sent R’ Chatche to a distant city to pick up and bring back money for the Yeshiva. At that time, after the overthrow of the Tzar and before the new government established their control, the country was in a state of chaos. Bands of marauders were roaming the streets and lawlessness was rampant. People would be killed for the sake of a pair of shoes. It goes without saying that they wouldn’t hesitate to attack any Jew in sight – many were thrown off moving trains – and travel at that time was literal mesirus nefesh.

R’ Chatche, of course, disregarded the danger and personal risk, and carried out the Rebbe’s directive. However, on the way back, he was, in fact, accosted by hooligans, and robbed, and only miraculously escaped with his life.

Upon his return, he reported to the Rebbe about what had occurred, and how the money was forcibly taken from him. The Rebbe replied: “Because you are an oiness (it was not your fault, it was unavoidable), you can’t be expected to replace the money now. But you will replace it gradually (in instalments)”.

Indeed, throughout his life, R’ Chatche was always deducting from his personal salary to repay his “debt” to Tomchei Tmimim!

And the question is obvious: The fact that he was an oiness should make him not responsible to return the money in any manner, even over time. Why should have had to bear a lifelong debt?!The lomdim are asking – he was a shomer chinom, who is not even responsible for gneiva v’aveida, and surely not for armed robbery which is a complete oiness? And common sense people are asking – is that fair? He risked his life for the cause, is his reward to have to be eternally indebted to the Yeshiva?

The answer is, there are certain areas in which oiness – or not – is not a factor. There are certain things that are not done because of a sense of obligation or duty, but because the need is inherently felt. A father may experience setbacks in business through no fault of his. But he will never say “I am an oiness, so I don’t have to feed my family this week”. Whatever the situation, he will always find some way to provide for them, not to do so doesn’t come under consideration, and he can’t see himself as excused or exempt.

R’ Chatche never felt “obligated” to deliver the money to Tomchei Tmimim. Mesirus nefesh, by definition, is never an obligation, and that was an act of unquestionable mesirus nefesh. He knew that the Yeshiva needed those funds. His Rebbe needed those funds. And this was as important to him as life itself, there was never place for any calculations or considerations. It was not something from which he could be excused or exempt.

With regards to the details, the terms of the payment, there the reasoning of oiness could be applied, to determine which manner of payment was viable. But the fact of the money ultimately reaching Yeshiva was never under question.

And I think this is important for all of us to consider these days (and – no – this is not an appeal for the Yeshiva…):

Right now, we all have many ways in which we could – justifiably – see ourselves as “oiness” and exempt from various obligations. We can’t – and mustn’t – daven with a minyan, go to the mikva or hear krias haTorah. We have to modify the way we sell our chometz, toivel our new utensils and even do mivtzoim.

And, I think these are summed up in this week’s Parsha. The Possuk says אש תמיד תוקד על המזבח לא תכבה. The Magid interpreted (quoted in Hayom Yom) that every Jew has an inner mizbeach, in his personal, internal, mishkan. And he needs to ignite an inner fire, a personal excitement about Yiddishkeit and G-dliness (in accordance with what Chazal tell us מצוה להביא מן ההדיוט). About this personal fire, the Torah promises לא תכבה, – that it will extinguish and obliterate all the negativity and undesirables.

We are davening alone, between the four walls of our own home. Perhaps we tell ourselves, that under these circumstances, lacking the proper atmosphere (and being inundated with such depressing news all the time), the Eibishter can hardly expect us imbue any feeling or warmth into our davening.

But we need to remember and understand that when it comes to the אש תמיד, there was never and can never be any though of exemption. In fact, it is for that reason that it is referred to as אש תמיד, – a permanent fire, because it can never be affected or weakened by any outside circumstances.

With regards to the technicalities of the davening, the terms and rules, including where it takes place, there is indeed the consideration of oiness that has us davening at home for the time being. But our manner of davening still needs to be with the אש תמיד, with the fire of our neshomo. We still need to daven with our full heart and soul, בכל לבבך ובכל נפשך ובכל מאודיך, the way we know davening is meant to be, saying each word milah b’milah with a siddur with utmost concentration and feeling.

In fact, without the atmosphere that being in the shul and the minyan provides (and, maybe, also without some of the distraction that are inevitably present in shul), making sure that our davening is imbued with inner fire and feeling may be even more crucial (and perhaps, also, even more doable).

The same is true with regards to learning Torah. We can’t go to Yeshiva or to the beis midrash. We can’t get within 6 (or 26) feet of our chavrusa, and most of us are confined to our homes, challenged by the chaos of a house full of (bored) children.

But learning Torah is – for us – not merely an obligation. It is, rather, our very life חיינו ואורך ימינו. So, we have to make sure that, within our solitary confinement, we’re still not just doing our “duty-learning,” but learning with excitement and enthusiasm – with the fire of our neshomo – and getting excited about a maamar or about a Rambam.

We need to ignite our inner fire. With regards to the technicalities and terms, we need to turn to our Rabbonim, to find out what we are obligated to do – and even what we may do. But our internal fire, our אש תמיד, was never up for discussion. We are Yidden, we are chassidim, we are tmimim, and – despite everything that is going on (and maybe even especially because of it…) – we are unwavering with our fiery love for Hashem and burning desire for giluy Elokus in the world. It is up to us to activate it, cultivate it, nourish it and channel it, so that we are always conscious of it, experiencing it and expressing it.

And, as the Magid taught, the אש תמיד has the power and segula of לא תכבה. Never in our times, and perhaps at any time, was there such an abundance of לא – of negativity and dvorim bilti retzuyim – in the world as right now. Let us ignite our inner fire, our eish tomid, and may the Eibishter – immediately – extinguish and remove any last traces of the “lo” and replace with tov hanireh vehanigleh for everyone, and with the ultimate positive revelation of Moshiach Now!