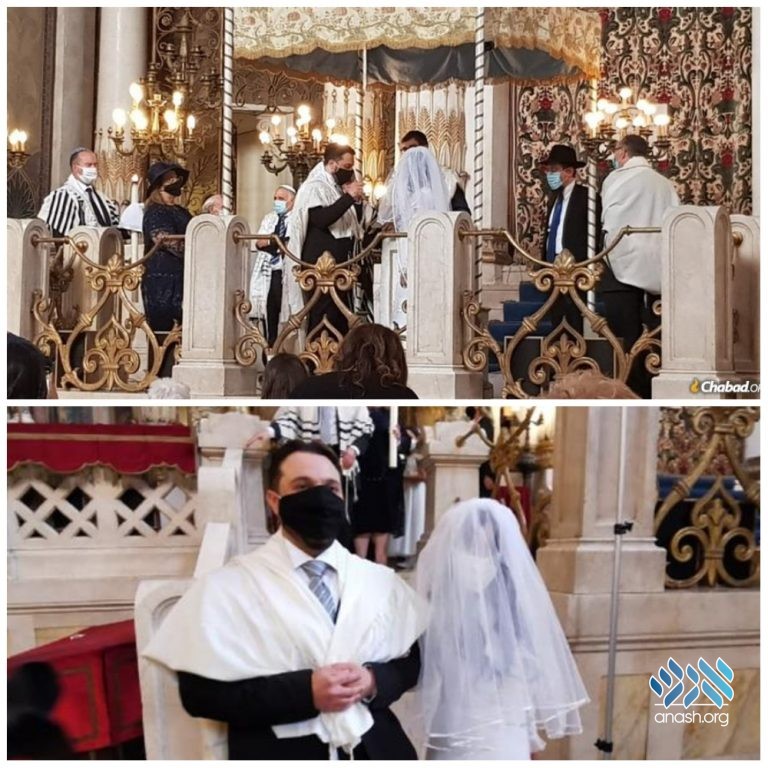 After almost four months in limbo, a Jewish couple in Rome were married at their first opportunity, even though that meant the bride’s parents couldn’t be there.

By Aharon Loschak for Chabad.org

When the novel coronavirus made its way to Europe, Italy became one of the first epicenters of the pandemic, with rapidly increasing infection and casualty rates raising the alarm for the rest of the world. Gaining traction all too fast, by mid-February the nation of 60-million that also is one of the world’s most beloved tourist destinations was on lockdown.

It was during this turbulent time that Marco Del Monte of Rome and his fiancée, Elinor Hanoka, were faced with a tough decision: What to do about their upcoming wedding scheduled to take place in Israel on March 15? Locked down in Italy, how could they possibly pull that off?

A native of Rome, Marco had spent years waiting to find a suitable match for his religious lifestyle in the Eternal City. His search eventually led him to Rabbi Menachem Lazar of Chabad Piazza Bologna in Rome; over the years, he grew close to the rabbi and his commitment to Jewish life increased.

A talented chef, Marco found his niche in the Jewish community of Rome, cooking for private events, helping other caterers and serving as a mashgiach for kosher food.

Marco’s expertise as a chef served as his connection point with the Israeli ambassador to Italy, Dror Eydar. “We were at the International Conference of Shluchim in New York, and an Israeli journalist friend introduced us to Dror, the incoming Israeli ambassador,” explained Lazar. “When Dror arrived in Rome, we struck a relationship that is ongoing to this day.”

As an observant Jew, Eydar needed a full-time kosher chef in the embassy, and Lazar recommended Marco for the job. It was a match, and Marco has been performing his wizardry in the kitchen there since.

All this time, his heart was looking for his soul mate.

Elinor hails from Israel; her medical studies brought her to Rome some years ago. As the address for Jewish students in Rome, Chabad of Piazza Bologna became Elinor’s second home for a number of years. Best of all, it was the place where she met Marco. It wasn’t long before the two were engaged to be married.

The wedding was set for March in Israel. Lazar was commissioned to officiate there, and everyone was thrilled.

And then the world turned upside down.

“At first, the thought was to move the wedding to Italy,” said Lazar. “One of the challenges was that her parents would have to quarantine on their return to Israel.”

As personal friends of the Israeli ambassador, the young couple toyed with the idea of taking Eydar’s offer to host a private event in the embassy. Alas, it wasn’t before long that Italian authorities banned all weddings, and that plan was also shelved.

And so, matters stood at a stalemate, with the bride and groom in limbo.

Slowly and painfully, over these past few months, the battered country has started to recover from its wounds. As the numbers started coming down—there have been 237,00 coronavirus cases and nearly 35,000 deaths—and matters appear to be trending towards a safer environment, the Italian government has eased restrictions, including opening places of worship, albeit under certain restrictions.

Rabbi Riccardo Di Segni, the chief Rabbi of Rome who presides over the Great Synagogue there—a towering, majestic edifice—joyfully opened his doors for the first time since the lockdown went into effect for Shabbat on June 6. The first possible day to host any sort of event in the Great Synagogue was the following day, June 7.

As a medical professional himself, Di Segni ordered his community into lockdown well before the authorities, going so far as to boldly cancel all public Purim festivities, thus possibly sparing them the worst. Indeed, the Jewish community of Rome has reported lower numbers than many other comparative communities.

“When Rabbi De Segni called us and told us that he was opening the synagogue, and asked us what we wanted to do, we were elated to hear that we might finally get our chance,” Marco and Elinor told Chabad.org. Though it was immediately understood that Elinor’s parents would not be able to attend, mother and father graciously and whole-heartedly encouraged their daughter and future son-in-law to grab the first opportunity they had and go ahead with the wedding.

“They said that the wedding is a big mitzvah, and we shouldn’t delay it a day longer,” said the bride and groom.

And so, almost four months after the entire country shut down, the first post-lockdown Jewish wedding in Rome took place on Sunday amid much relief and joy.

Staying within the limits currently in place, only 60 people were allowed to attend. Everyone was masked, bride and groom included. Ned Bendaud, a relative and close friend of the groom who does hashgachah work with him, was there. “It was a small party with outsized joy. Every individual there was personally invested in the celebration, and it really showed.”

“Great joy, albeit not in the cities of Judea and in the streets of Jerusalem, as had been planned, but in Rome,” Eydar wrote on Facebook, playing on the text of the Sheva Brachot (“Seven Blessings”) recited at every Jewish wedding.

Emotions ran high all around. “My grandfather is a survivor of Auschwitz, and when he personally blessed me on my wedding day, I couldn’t stop the tears flowing down my face,” said Marco.

While the wedding was plan B, C, or perhaps even D, it was beautiful. “Everything about the way things ultimately turned out was so special’ wrote the bride and groom. “It is emotional for us and for the entire community.”