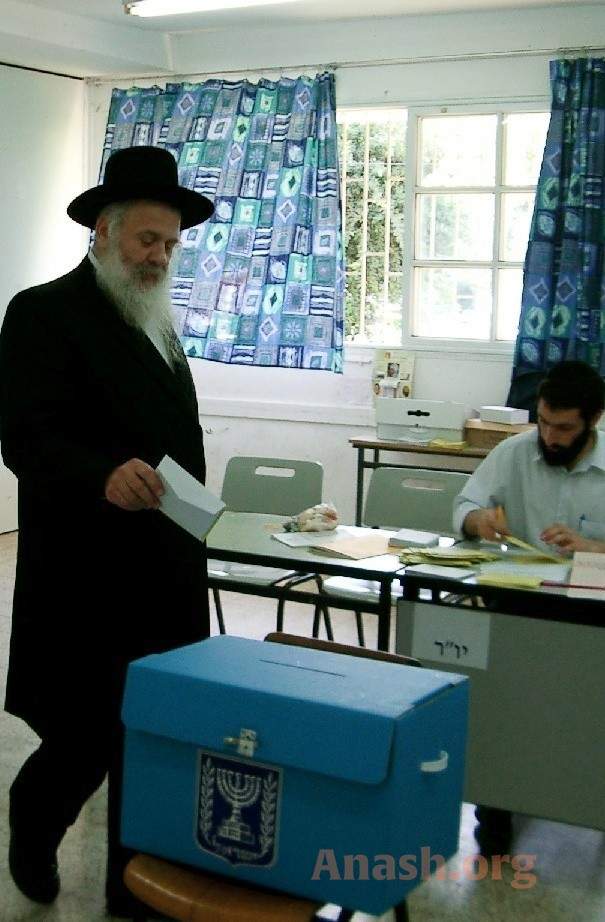 Elections in Israel are scheduled for this Tuesday, 4 Nissan/April 9th, and many parties are competing for the Chabad vote.

This Tuesday, 4 Nissan/April 9th, Israel will hold elections for the twenty-first Knesset. Chabad in Eretz Yisroel is a large and prominent group, and they can likely sway a party’s chances. Naturally, all parties are campaigning for their vote.

Starting from the first elections after the nesius, and reiterated at every election thereafter, the Rebbe instructed chassidim to vote for “the most religious party” (reshima hayoseir chareidis). But this itself has always been the subject of respectful disagreement among Rabbonim and Chassidim as to which party qualifies as fitting that criteria.

Some claim that Yahadus HaTorah (UTJ) fits that description best. Their party platform calls for increased funding for yeshivos, prohibiting businesses from operating on Shabbos, an end to drafting yeshiva students to the army and a broader upholding of the state’s Jewish character. Many Rabbonim and Mashpi’im have endorsed this view.

However, other Rabbonim disputed this assertion. In a recent statement from the Rabbinical Congress for Peace, a group dedicated to shleimus ha’aretz, the Rabbonim maintain that it is forbidden to vote for UTJ.

The Rabbonim pointed to repeated statements by veteran Degel MK Moshe Gafni that halacha allows for giving away land, and that the Orthodox parties would stand with the government in handing over territories in order to reach a political compromise.

The Rabbonim continued, “Despite our repeated requests, Gafni refused to retract his remarks, and even our requests from United Torah Judaism as a party to officially disavow these statements and declare that this is contrary to the party’s position have never been answered!”

In the most recent election cycle, many Lubavitchers voted for Eli Yishai’s Yachad party. Yishai, a former Knesset member from Shas, had led a campaign focused on shleimus hatorah, shleimus ha’am, and shleimus ha’aretz. While ultimately failing to pass the minimum threshold, Yachad earned 75% of the vote in Kfar Chabad. This time however, Yishai is throwing his support behind UTJ.

During the heat of the last election, Reb Yoel Kahn released a letter stating that “after actually seeing the past conduct of that [UTJ] list, it is highly questionable if they could be considered the most religious… because they are not willing to announce that their position is against handing over the territories, in such a situation there is no directive to vote for it.”

Yet others are considering voting for the Bayit HaYehudi party, led by Rabbi Rafi Peretz and MK Betzalel Smotrich. Peretz, a former Chief Rabbi of the IDF, and founder of the pre-military yeshiva Otzem, is well respected in the national religious community. While Smotrich, well-known for his uncompromising views on shleimus ha’aretz, stands at the forefront of the battle against chillul Shabbos. (Previously, this party was led by Naftali Bennet, who took a liberal view on issues of Yidishkeit. Its new leaders are fully committed to Torah and Mitzvos.)

Former MK Moshe Feiglin, who now leads the Zehut party, has been trying to court Chabad votes as well. Feiglin is known for his right-wing views, yet wants to end the Chief Rabbinate’s jurisdiction over issues such as marriage and divorce. While another candidate on his list has called for parents to stop circumcising their children. (Interesting fact: Feiglin, although not a chossid himself, is named after his elter zeide the Australian chossid Reb Moshe Zalman Feiglin)

He says he will refuse to enter any coalition that refuses to legalize the use of cannabis. So it remains difficult to see how anyone can justify voting for him.

On Thursday, the Rabbinical Congress for Peace has announced that the Otzma L’Yisrael party running jointly with Bayit HaYehudi, is the only party that has signed their statement of principles, and is thus the party that receives their endorsement.

In Nachlas Har Chabad this Shabbos, an announcement was made in the name of the , Rabbi Yitzchok Y. Yeruslavski, that called on people in Nachla to vote for UTJ/Yahadus haTorah.

In response to all these discussions, Vaad Rabbonei Chabad b’Eretz haKodesh published a letter restating the Rebbe’s directive that one must vote for “the most religious party,” as well as the Rebbe’s directive that Chabad does not get involved in politics. Specifically adding that no one has the authority to endorse any party in the name of Chabad.