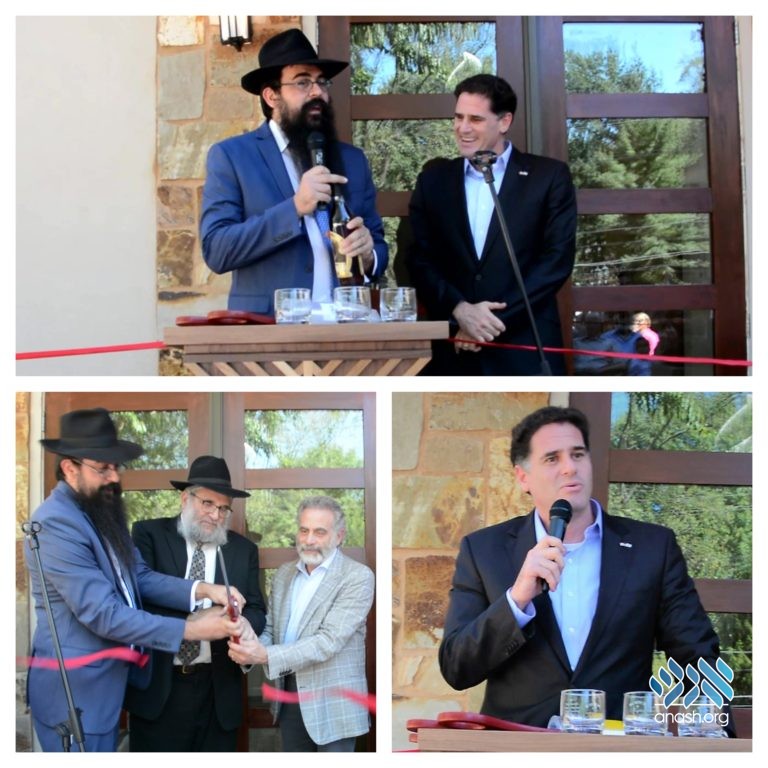 Hundreds gathered on a sunny Sunday afternoon to celebrate an incredible milestone for the community of Bethesda, Maryland.

On September 15th a dream over a decade in the making was realized when the Chabad Jewish Center of Bethesda cut the ribbon and opened the doors to its beautiful new building at 5324 Goldsboro Rd in the affluent Washington DC suburb. A truly jubilant atmosphere pervaded this special event as people from all backgrounds and walks of life basked in the pride of communal achievement.

After enjoying a delicious buffet of sushi and cocktails, the crowd was invited to take their seats in front of the main entrance of the new center. Rabbi Sender Geisinsky, who along with his wife Nechamie co-directs Chabad of Bethesda, stood at the podium in front of the red ribbon and greeted all the guests.

Beginning with a blessing of thanksgiving to G-d, he spoke movingly about the momentousness of the occasion. He took the time to acknowledge the community in general and all the people in specific who helped bring the project to fruition.

Rabbi Geisinsky shared that the building would be dedicated to the memory of his mother, the beloved late Rebbetzin of the Chabad Bethesda community. The venerated and renowned educator Mrs. Chaya Zlata Geisinsky ob”m founded Chabad in Bethesda together with her husband Rabbi Bentzion Geisinsky. This announcement was received with appreciative applause from the crowd, many of whom whose lives had been impacted by Mrs. Geisinsky.

Words of greeting were later shared by Rabbi Shmuel Kaplan, regional director of Chabad of Maryland. He spoke about the nature of a Chabad House being not an institution, but rather a home. He was followed by Dr. Rachamim Hedaya, president of the Chabad Bethesda community, who spoke about how wonderful it was to be living in a time that Jews could celebrate such a moment openly and proudly, and invited everyone to partake in the incredible resource that is Chabad of Bethesda.

Final remarks were shared by an honored member of the Chabad of Bethesda community, His Excellency Ron Dermer, Israeli Ambassador to the US. He shared blessings and congratulations on behalf of the State of Israel.

Mr. Dermer spoke about how it is the responsibility of the Chosen People to imbue this physical world with holiness and said that he and his family have personally come to witness how Chabad of Bethesda is realizing this purpose. He expressed his confidence that, in short order, Chabad of Bethesda would outgrow this new space and need to expand to an even larger facility.

Rabbi Sender Geisinsky then unveiled a one-of-a-kind bottle of liquor that had been set aside for years to be opened at this moment. He was joined at the podium by his wife, Nechamie, by his father Rabbi Bentzion Geisinsky, director of Chabad Centers in the Bethesda-Chevy Chase area and by the Ambassador, his wife and key members of the community for a celebratory L’chaim. Then, as the excited crowd looked on in anticipation, giant scissors were handed out and the symbolic ribbon was cut amid cheers and the singing of Siman Tov u’Mazal Tov.

The crowd was then invited in into the new center for a sumptuous catered spread and Viennese dessert table. The joy felt by the attendees of this special moment will no doubt last them for a long time to come.