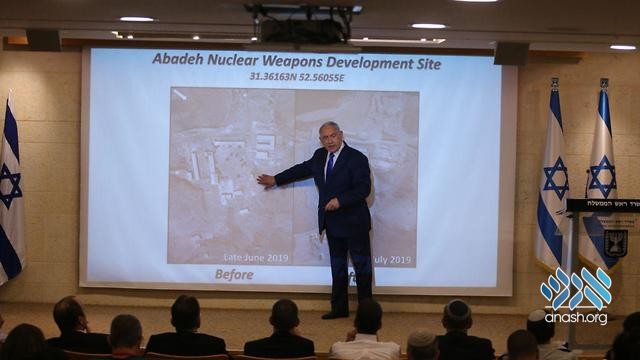 Prime Minister Benjamin Netanyahu said on Monday that Israel had uncovered another secret site where Iran was developing nuclear weapons, which was destroyed once Tehran realized it had been spotted.

It was the first time that Netanyahu had identified the site, which, he said, was discovered in a trove of Iranian documents Israel previously obtained and released publicly last year.

“Even before that, Iran knew that we were on to them so they cleared the site,” he said. “This is an actual cover-up. They put gravel on it to try and hide their traces. But they didn’t. The IAEA found traces of uranium that Iran hid in these sites. That’s a direct violation of the NPT, the Non-Proliferation Treaty.

“Today, we reveal that yet another secret nuclear site was exposed in the archives that we brought from Tehran. In this site, Iran conducted experiments to develop nuclear weapons. This is the site near Abadeh, south of Isfahan,” he said.

Netanyahu displayed a satellite photo of the facility taken in June, followed by a second photo of what he said was the site being destroyed in July.

Netanyahu, a fierce critic of the international nuclear deal with Iran, maintains Tehran is trying to develop a nuclear weapon — a charge Iran denies.

Netanyahu’s comments came on the heels of revelations that the UN’s atomic watchdog, the IAEA, found traces of uranium at a different site that Iran had yet to explain.