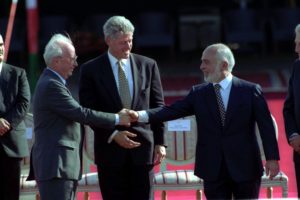 For the quarter of a century since the 1994 peace agreement between Israel and Jordan, Israel has leased from Jordan the border territories of Naharayim and Tzofar.

The two areas of land have been the subject of a dispute between the two countries ever since Israel’s Independence War in 1948. Under the 1994 peace agreement, Israel recognized that the land belonged to Jordan, and Jordan agreed to lease the land to Israel for 25 years. The widespread expectation was that the lease would be renewed after the 25 year period.

But just over a year ago, Jordan’s King Abdullah II said his country had notified Israel that it would not renew the clause in the peace treaty that granted Israel the use of the two areas.

Following the king’s announcement, Israeli Prime Minister Benjamin Netanyahu sought to calm the crisis, proposing negotiations with Jordan to keep the current arrangement in place. Ultimately, the negotiations failed, and today was the last day that Israeli farmers, who had farmed the area for over 70 years, were allowed to access their lands.

Once again, we are witness to the fulfillment of the Rebbe’s prophetic words. Time after time the Rebbe warned against one-sided peace deals where the main beneficiary is Israel’s enemy. For many years the Israel-Jordan peace deal seemed to be working. Yet as relations between the two countries deteriorate, once again Israel is left to face an economic and territorial loss.