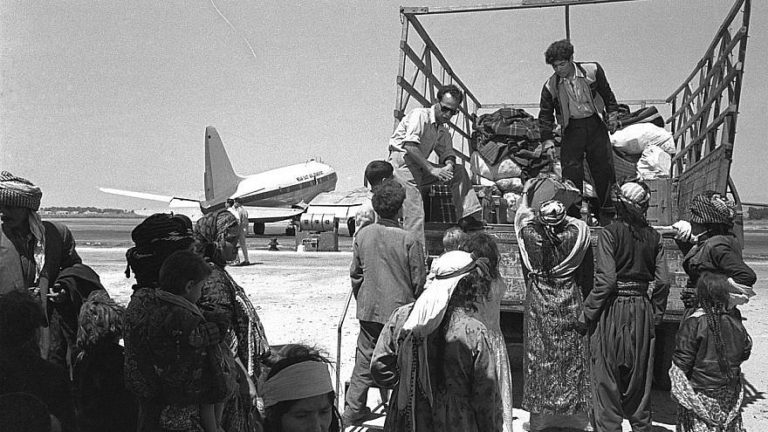 Iraqi Jews leaving Lod airport in Israel on their way to the Ma'abara transit camp, 1951.

Israel is calling on the United Nations to recognize the 800,000 Jewish refugees who were expelled or fled Arab countries and Iran when Israel was established as a state in 1948.

The envoy said it was time for the international community to remember the “forgotten” Jewish refugees.

“850,000 Jews were forced out of Arab countries & Iran and became refugees. These Jews were subject to brutal attacks and harassment & were forced to flee leaving everything behind. Yet the int’l community does not speak of them because it doesn’t serve the Palestinian narrative,” Danon said in a statement on Twitter.

Danon said an estimated 850,000 Jews were forced out of Iraq, Egypt, Morocco, and other countries over the last century. Many of them found refuge in Israel.

Israel took in these refugees and integrated them into our society. The int’l community ignored them and built corrupt institutions that only serve so-called Palestinian refugees. I will propose a resolution that will acknowledge the wrong done to the ‘forgotten’ Jewish refugees,” he continued.

Meanwhile, an estimated 700,000 Palestinians fled or were forced from their homes during Israel’s war for independence.

The resolution included calls for continued humanitarian and economic aid to the Palestinians through UNRWA, and condemned the expansion of Israeli settlement communities in the areas captured by the IDF during the 1967 Six Day War.

Israel and the United States, however, condemn UNRWA for corruption, hatred of Israel and incitement to terrorism.