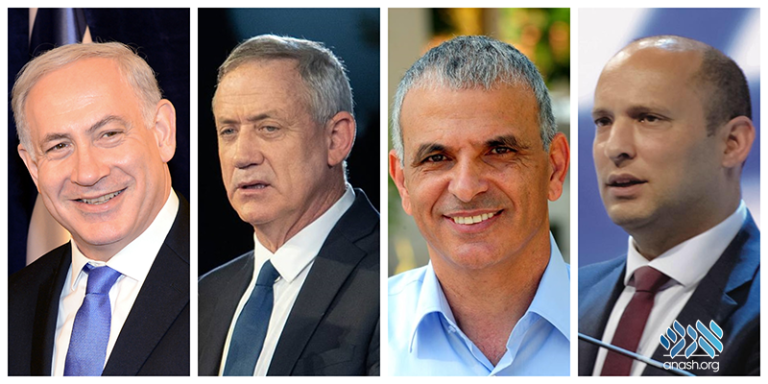 Prime Minister Benjamin Netanyahu is facing the possibility of having to fight a second election this year, as he struggles to form a coalition government. With a looming deadline, Israel’s newly elected parliament began drafting a bill on Monday to dissolve itself.

If the bill passes, Israel would be in uncharted waters – sending the political system into disarray with a second snap election in just a matter of months.

Netanyahu appeared to have a clear path to a majority coalition, and fifth term in office overall, after the April 9 elections. His Likud party secured 35 seats, tying it for the largest party in the highly fractured 120-seat parliament. Counting his traditional allies, Netanyahu appeared to control a solid 65-55 majority.

But his prospective coalition has been thrown into crisis in recent days by former Defense Minister Avigdor Lieberman, an ally and sometimes rival of Netanyahu’s.

Yisrael Beitenu leader Avigdor Liberman said Monday that his party plans to keep insisting on the draft law, regardless of the impasse it has caused in coalition talks ahead of the Wednesday deadline for the establishment of a new government.

Knesset Speaker Yuli Edelstein received a letter signed by coalition heads expressing their intention to advance the Likud bill to dissolve the government after negotiations between the parties broke down.

The letter was submitted at Eledstein’s request, and includes Liberman’s signature.

Earlier, discussions were underway in the Edelstein’s office regarding the possibility of new elections as coalition talks are permanently deadlocked. The talks that took place were part of his regular Monday meetings, at which time the week’s Knesset plenum agenda is set.

Edelstein on Monday summoned MK (Blue and White) Meir Cohen and MK (Yahadut Hatorah) Yisrael Eichler, both serving as Deputy Knesset Speakers, to participate in this week’s decision-making process regarding the schedule.

If Eichler voted against the decision to place the bill to dissolve the current Knesset on this week’s agenda, as Cohen did, then the bill would not be on the Knesset agenda this week, as Prime Minister Binyamin Netanyahu would like to see occur if a coalition is not established.

In the past hours, enormous pressure was placed on Eichler by members of the opposition, trying to persuade him to reject placing the bill on the Knesset agenda. However, in line with instructions from Gedolei Torah, Eichler voted in favor of the bill, which will now be on the agenda on Wednesday, May 29, 2019, in the event a coalition is not formed before that.

It was also agreed that new elections will take place, if required, on 26 Menachem Av, August 27,2019.

The deadline to present his new coalition expires for Prime Minister Binyamin Netanyahu on Wednesday, May 29, 2019. If a coalition is not formed, President Rivlin may give the mandate to another party under election law. However, the prime minister wishes to circumvent this by dissolving the current Knesset and compel new elections.

Dissolving parliament would be a shocking turn of events for Netanyahu, who has led the country for the past decade and appeared to capture a fourth consecutive term in the April election. “We invite Lieberman to join us today and not contribute to the toppling of a right-wing government,” a statement by Likud read.

With the 42-day timeline allotted to Netanyahu to sign agreements with his partners and present his new government set to expire late Wednesday, his Likud presented the paperwork to dissolve the parliament. The bill appeared to have a majority but could be pulled at any moment if a compromise is found.

The main opposition party, Blue and White, which also controls 35 seats, appealed for a chance to form a coalition. But a parliamentary vote for dissolution would automatically trigger new elections. Blue and White has ruled out any alliance with Netanyahu.

If the vote passes, it would mark the first time the scenario had played out in Israel and set the stage for an unprecedented second election in the same calendar year.

Polls indicate the results of a new election would not be much different from the last one.