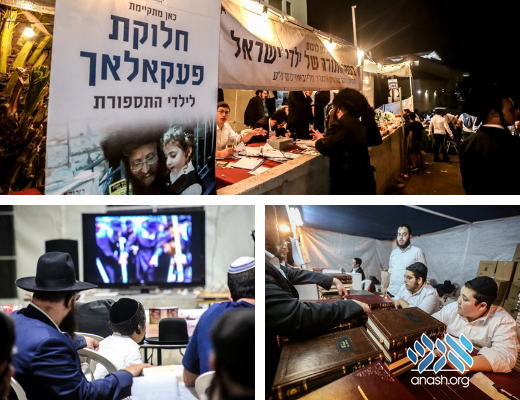 As 600,000 people descended on the Meron village where shliach Rabbi Yosef Yitzchok Halperin lives year round, he and a team of 60 bochurim stood ready to greet them.

Every year, hundreds of thousands of Jews come to Meron to daven, light bonfires, and celebrate at the kever of Rabbi Shimon Bar Yochai. For days before Lag Baomer, Meron was a flurry of activity as thousands of workers prepared for the hordes: tents and barricades were set up, drinks and snacks brought in, security arranged. Through it all, Rabbi Halperin was busy with preparations of his own.

During the 24 hours of Lag Baomer, 60 bochurim took shifts at a tefillin booth, giving visitors who had not yet done the mitzva that day a chance to do so. Letters in the children’s sefer Torah were sold, and gifts were given to the thousands of boys who came to have their upshernish at Rashbi’s kever.

As he does every year, Rabbi Halperin coordinated a massive tent sale of deeply discounted seforim on Chassidus and Kabbalah. A specially prepared video of the Rebbe was played prominently as masses of visitors stopped to watch.