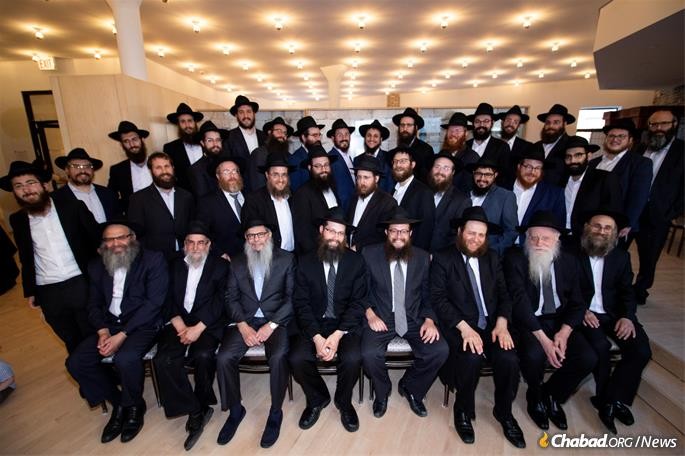 The classic Chicago greystones and quirky bars lining stately Logan Boulevard in Chicago’s Logan Square neighborhood are home these days to young, upwardly mobile professionals. So Mitch Trachtenberg did a double-take when he spotted black-hatted and bearded Rabbi Avremi Raichik strolling the boulevard this summer.

Along with his wife, Rivky, and their young children, the rabbi had just moved to the neighborhood to direct the newly formed Chabad of Logan Square. For the past few months, the Raichiks have been knocking on doors, fielding phone calls from neighborhood residents and getting the word out that they are open for business.

Raichik and Trachtenberg struck up a conversation, and now meet every week to study Torah and chat at a coffee shop right near where they initially met.

Their center, along with two others founded this year (in Glencoe and Norwood Park, respectively), brings the number of Chabad centers in the state of Illinois to 50. With a Jewish population believed to be approaching 300,000, Illinois has the fourth-largest concentration of Jewish people in the United States, following the New York/New Jersey metropolitan area, Southern California and South Florida.

“Time and again, I am filled with admiration at the outreach efforts of our brothers in the Chabad movement in Illinois. Through their commitment and tireless efforts, they continue to expand the network of Chabad institutions, which have a profound impact Jewish identity and commitment throughout the state,” says Rabbi Elisha Prero, president of the Chicago Rabbinical Council (cRc), who is both a practicing lawyer and a congregational rabbi. “I personally benefited from the presence of a Chabad House when I was in law school in Ann Arbor, Michigan. I look forward to Chabad’s continued growth in their work of sharing Torah and love throughout all of Illinois.”

Under his stewardship, in 1981, the first satellite Chabad center was founded in Highland Park to serve the northern suburbs by Rabbi Yosef and Michla Schanowitz. It was followed by a Chabad House in Skokie the following year.

Throughout the 1980s and ’90s, Chabad continued to expand throughout the northern part of the city and suburbs.

In 2001, the 20th Chabad House in Illinois was established in Peoria. Located 150 miles southwest of Chicago, it was the first Chabad House outside of Chicago and the northern suburbs.

While nearly half of Chabad centers in Illinois are in the city of Chicago, there has been significant growth in the suburbs as well as downstate.

Rabbi Daniel Moscowitz passed away suddenly in 2014, shortly after presiding over the opening of the Chabad House in Carbondale, Ill., more than 300 miles from Chicago. For the past five years, Lubavitch Chabad of Illinois has been led by his sons. Rabbi Meir Moscowitz serves as regional director, and Rabbi Yosef Moscowitz is the organization’s executive director. In those five years, nine Chabad Houses have opened.

“Things have changed a lot from when we first came,” says Michla Schanowitz. “People didn’t know who we were or what they needed us for. Thank G‑d, almost 40 years later, Chabad is being welcomed with open arms,” she says, referring to the Chabad center recently established in the tony suburb of Glencoe by Rabbi Sholom Ber and Deena Wolberg.

The third Chabad House founded this year is in the middle-class neighborhood of Norwood Park, just a stone’s throw away from O’Hare International Airport. Without a local synagogue or official Jewish presence, the area was ripe for a Chabad presence, and Rabbi Mendel and Sara Perlstein volunteered to take the challenge.

While they’re all in the sprawling north side of Chicagoland, each Chabad center serves a different constituency.

The rapidly developing Logan Square is home to mostly young people who grew up in the suburbs and are now establishing themselves in the city. To serve them, the Raichiks anticipate lively Shabbat dinners and programs for toddlers, and are exploring the possibility of a preschool.

In many respects, their activities are an extension of those held at the Bucktown Wicker Park Chabad Jewish Center, which was founded by Rabbi Yosef and Sara Moscowitz in 2005, when those neighborhoods were beginning to emerge as a destination for young urbanites. According to Trachtenberg, having a Chabad House in Logan Square means that he and his friends are able to participate in Shabbat dinner without needing to spend Friday nights in a different neighborhood.

“People are moving in all the time, and some are looking to connect Jewishly,” he explains. “I am looking to the Jewish life and programming they will bring to the neighborhood.”

Yosef Moscowitz explains that he has long had his eye on Logan Square, which borders Bucktown. “It is amazing how much growth we have seen within the city of Chicago over the past few years,” he notes. “Jewish life has been exploding in these emerging neighborhoods, some of which have not seen Jewish activity in generations.”

While Logan Square is still emerging, well-established Glencoe is ranked the wealthiest town in Illinois and 10th among the wealthiest towns in America. The town is famous for its homes and other features designed by architect Frank Lloyd Wright. According to Schanowitz, the Wolbergs will be focusing heavily on discussion groups, Torah classes and other programs that will enhance an area that already has a rich Jewish infrastructure in place.

Somewhere between the two extremes, middle-class Norwood Park is a magnet for people looking for a quiet, affordable place with easy access to public transport and well-regarded public schools.

“I continue to be inspired by our dedicated Chabad couples, who are bringing the joys of Judaism to every Jew in our state, wherever he or she may be geographically or socially,” says Rabbi Meir Moscowitz. “If Chabad centers can thrive in small communities several hours’ drive away from Chicago, there is no doubt that there is a lot of potential for growth in these smaller communities so close to home.”

Lubavitch Chabad of Illinois is built around a core of schools and central organizations, which serve the entire state, with most of the growth taking place with the addition of regional Chabad Houses.

A portion of Chabad rabbis representing every sector of Illinois (Photo: Shaina Benhiyoun)