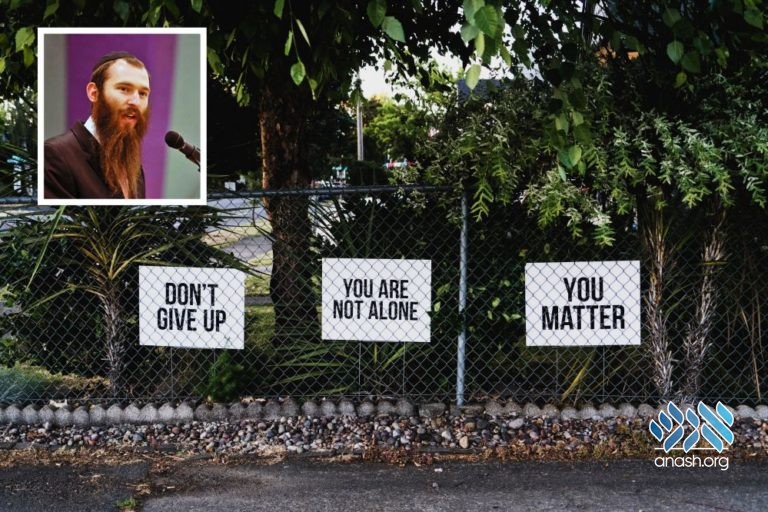 Suicide is at an all time high across the nation. We can’t remain silent and hope the problem goes away; luckily, we don’t have to. Join Rabbi Yarden Blumstein’s training on Sunday and learn how to save lives.

It’s one of the most overlooked and under-addressed topics in our society, yet probably one of the most important today. We shy away from it not out of callousness, but out of discomfort and fear. And ignorance- many of us care deeply, but we don’t know what we’re up t.

The topic is, of course, the painful reality of suicide and the mental, neurological and physiological conditions that lead to it. Suicide is now a leading cause of death in the United States, particularly among young people (teens and twenties) and older men (50+).

When physical illnesses come to the fore, society is quick to respond. Coronavirus hits the streets of China and disease control centers on the other side of the world spring into action. If a neighbor or relative is r”l diagnosed with a serious physical illness, we rush to support them, arranging meals, childcare, and everything they might need to ensure that they receive the best treatment possible. It is widely accepted that one suffering from diabetes, respiratory illness or a heart condition must follow doctors’ orders and take prescribed medications. Why is it so hard to apply the same thinking when dealing with mental illness and neurological disorders?

It’s hard because it is surrounded by stigma.

It’s hard because it is so frightening, and we don’t know what to do.

It’s hard because sitting with another’s pain is so uncomfortable and, well… painful.

It’s hard because we’ve been led to believe that we’re not qualified to act, and if we try to help we’ll make it worse. (This is true in some areas, such as playing therapist. But each of us is capable of supporting treatment and giving love.)

It’s hard because for centuries we’ve thought that if we ignore the problem, it will go away.

Suicide is a human behavior that terrifies most people. It is incorrectly viewed as a character or moral flaw, the act of a selfish person. Those struggling with suicidal tendencies and their relatives internalize tremendous guilt and shame. They respond by doing whatever they can to hide it- sometimes, at a tragic cost.

In reality, the suicidal tendency is a medical problem, one that is almost always associated with common and treatable mental illnesses such as depression, anxiety, bi-polar and substance abuse disorders.

The good news is, when it comes to fighting this fight, each one of us has a lot of power.

When we talk more openly about suicide, we help people see it as the treatable medical menace that it is. When we normalize treatment of mental illnesses, we help those who suffer from them overcome the guilt and shame that prevents them from seeking help. And each of us can learn how to identify someone who is at risk, and how to provide them with resources and support.

If you’re a parent, teacher, community leader, sibling or neighbor, there is someone in your life who needs help. By learning to recognize the warning signs and how to respond, you can make life bearable for someone you care about.

Luckily, Neshamos is confronting this challenge head on with a host of programs and initiatives aimed at raising awareness, providing help, and creating emotionally safe and responsive communities.

On Sunday, February 23 / 28 Shvat, Neshamos is hosting four training sessions with Rabbi Yarden Blumstein at the Razag Hall. Rabbi Blumstein is a shliach and certified LivingWorks trainer, and the founder of UMatter. He has trained nearly 2,000 people in suicide prevention.

“In the past five years, ten teens associated with Chabad communities have taken their lives,” Rabbi Blumstein said. “As adults, as community members, as shluchim, it is our job to be there for people when they need help.”

Blumstein calls this training the CPR of mental health, helping people recognize signs in someone who might be suicidal and learn how to intervene. “There is a fascinating statistic that every five people trained leads to two successful interventions within the first ninety days.”

The first three sessions, which will each last for three hours, will take place throughout the day and will include in-depth training. These sessions require a reservation, which can be made by emailing admin@neshamos.org. This training is recommended for anyone in a leadership position within a school or community.

The entire community is encouraged to join the final training session on Sunday at 8:30 PM. Men and women will be seated separately with a mechitzah at all sessions.

During your lifetime you are far more likely to enounter someone who needs suicide intervention than CPR. Make sure you have the knowledge and tools you need to help.

If you care, please be there.

These suicide prevention workshops have been arranged by Neshamos in conjuction with Rabbi Shais Taub.