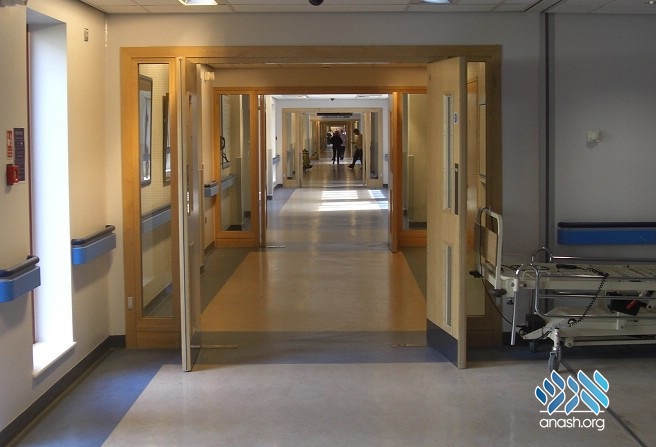 Mrs. Esther Langsam, mother of – tzu lange yohren – Rabbi Shmuel Langsam, was a Shusterman from home (sister of Reb Mottel Shusterman). In America, around Chanuka 5712, she was a young mother with a few young children. At that time, she hadn’t been feeling well for some time. She visited a few physicians who hadn’t come up with any conclusive diagnosis.

Finally she visited a big specialist in Manhattan who did a very thorough check up, and broke the sad news that she was suffering with cancer r”l. In those years there was little to nothing that could be done for this illness, and the doctor was frank with her. “Go home, Mrs. Langsam, try to make yourself as comfortable as can be, and try to enjoy the remaining weeks or months with your family in the best way possible, because, unfortunately, you have very little time left”.

As a chosid, she knew there was only one person to turn to. Needless to say, she did not go home, but took the subway from Manhattan directly to 770. There she went into Rabbi Chodakov’s office and told him that she needs to speak to the Rebbe immediately about a very urgent matter. Rabbi Chodakov told her he would take down her information, and would try to set her up an appointment in a few months.

This, however, would not do, and she was very insistent that it couldn’t wait a few months (according to her doctor, she should not expect to be around in a few months…). She told him unequivocally that she must speak to the Rebbe today, now.

But Rabbi Chodakov was just as insistent. Firstly, he informed her, there are many people in line before her, and there is no way she could get a turn before all of them. Secondly, even if she could somehow get ahead of the line, the Rebbe never meets with people during the day. And thirdly, on Chanukah the Rebbe never meets people even at night. So her request was simply an impossibility. “What you should do”, he told her, “is write down your question in a letter, and I’ll bring it to the Rebbe immediately, and tell him that you’re awaiting the answer”.

She was, however, not ready to relent. She felt that this was something that she needed to meet with the Rebbe about and not address through a letter, and she tried to find ways to convince Rabbi Chodakov of this. “I am from Zhlobin”, she informed him, “and there was no (Jewish) schooling for girls at all. I can’t write any Hebrew, all I know how to write is Russian.”

Rabbi Chodakov tried to reassure her: “You can write the letter in any language in which you’re comfortable; – the Rebbe understands Russian as well.” But she was just as adamant: “That is unthinkable, to a Rebbe one doesn’t write in Russian, although he understands it, a letter to a Rebbe must be written in loshon kodesh.”

Rabbi Leibel Groner was sitting in the office, and Rabbi Chodakov motioned to him. “Go to that bochur”, he said, “and tell him what you want written, and he will write it for you to the Rebbe in Hebrew”. Rabbi Groner, who had followed the entire exchange, motioned her to approach him. But he had a different idea. “Write in Russian”, he told her, “Rabbi Chodakov won’t know what you wrote. You can write to the Rebbe in Russian that you want to meet with him, and about the urgency, and the Rebbe will get your message”.

This idea appealed to her, and she did as he suggested. Shortly thereafter, Rabbi Chodakov came to her with the message from the Rebbe: The Rebbe would come out soon for mincha, he said, and when he returns to his room, she should wait by the door, and she can speak to him then.

She followed these directives, and waited for the Rebbe. Understandably, she was not in a very positive frame of mind. According to the definitive conclusion of her specialist she had very little time remaining on this world. What would be with her family?!

When she met the Rebbe, she cried bitterly as she told her sad story.

The Rebbe looked at her intently and said “Ich darken eich gornit nit fun Samarkand” [I don’t recognize you at all from Samakand].

[Now, the Rebbe – to our knowledge – had not been in Samarkand. But the Rebbe was – seemingly – referring to her activities there, which he was aware of. While she was in Samarkand, she was involved in providing (Polish) passports for many chassidim who needed them, at great personal sacrifice. (In fact, the government, subsequently, spent years seeking her).

The Rebbe was – seemingly – telling her: ‘In Samarkand you defied the powerful regime, you paid no attention to the world and its natural laws, and here in America, you’re allowing yourself to be so affected by what the doctor said. For this reason, the Rebbe said, he doesn’t recognize her as being the same woman from Samarkand].

Of course, she went home and did exactly as the Rebbe instructed. Of course, the illness disappeared without a trace. She passed away over forty years later, in 5757, and only then, two weeks before her passing, did the illness finally reappear!

Besides being a wonderful story, in many ways, it is a story that, I believe, contains a very timely message for each and every one of us: We just spent an entire month of Tishrei during which we were, in one way or another, detached from the world, from mundaneness, and living our lives on a higher plane.

From Rosh hashonoh, when every single person, in his or her way, cared more than anything else that the Eibishter should decide and agree to be our King. To Yom Kippur, when our physical bodies didn’t need food or drink, because they were focused on yechida leyachdoch. And right through simchas Torah when we reached the climax of rejoicing with all of our senses about the fact that Atoh horeiso…ein od milvado!

But now, we’re all – each in our own way – returning to the drudgery of our daily life. We return to our home, to the “heim lo yodu drochoi”, and to our regular interests and pursuits.

And the Rebbe may say to us, in Cheshvon or in Kislev or in Teves, “Ich darken eich gor nit fun Simchas Torah”. Or from Yom Kippur. Or from Hoshano rabo. Or from Simchas beis hashoeivah. He says: ‘Then you were disregarding worldly considerations and worldly concerns. You danced and sang 24-7, because all that mattered was ein od milvado’.

And now, suddenly, your causes of joy, or of sadness, are what the mindset of your nefesh habehamis or the world around you attach importance to??!! Your stocks went up, so you become in a good mood. Your sushi gets burned, and you become miserable. What’s going on? You’re not recognizable as the same person, the same chosid, from Tishrei?!!

In a maamar of Shabbos Bereishis, the Rebbe brings the maamar Chazal אסתכל באורייתא וברא עלמא, the world came into being by the Eibishter merely gazing into Torah. If that is the case, the question is, what was the need or purpose of the asoroh maamoros that the Eibishter “used” to create the world, why did gazing into the Torah not suffice?

The basic answer (in the maamar) is that the world that emerges as a result of the Eibishter gazing into Torah is a Torah world, a more spiritual world, which doesn’t fulfil the ultimate goal of dira batachtonim. In order to realize that goal, there needed to be asoroh maamoros, all of the sefiros and olamos, to bring about olam hazeh in its current physical state.

Similarly, over Tishrei our world is like the world of אסתכל באורייתא וברא עלמא. It was easy and natural to see each day defined by Torah, because every day had its unique place within the special framework of Tishrei, and it was easy for us to view these days in the context of the Tishrei tomim tovim, and live them accordingly. But, the ultimate goal is that the ensuing days throughout the year, which we would be inclined to view and define from more of a worldly perspective, should also be influenced and affected by our “world” and mindset of Tishrei.

Basically, the goal is that Tishrei shouldn’t come to an end. That when we fulfill the ויעקב הלך לדרכו, we should continue to be recognizable as the same chosid from Tishrei and Simchas Torah.

We all danced enthusiastically and energetically on Simchas Torah, rejoicing with our entire being in the Oneness of Hashem. But sometimes, when we come to the weeks of Cheshvon, that dancing seems like a distant memory. “Today is not Simchas Torah”, we tell ourselves (or, our nefesh habehamis tells our nefesh ho’Elokis, rebutting its attempt at cooperation). Today we are back to our usual life.

But, in truth, the goal is that the Simchas Torah, the entire Tishrei, should continue to affect and govern our lives, that we should continue to be recognizable as the chosid from Tishrei! And one of the ways to make it easier to achieve this is by continuing to be אסתכל באורייתא:

During Tishrei it is easy, even effortless, for the day to be defined by what Torah says about it. All the days of the month have a very defined title, that makes it easy and almost automatic for us to think about them as “Today is hoshana rabo” (with all of the beautiful minhogim and halochos involved in it), “Today is chol hamo’ed”, “Today is aseres yemei Teshuva” (“Kan beyochid”). In fact it is easy to forget or overlook the other aspects of the day (it is election day, the stock market is closed or open, it is a debate day etc.).

But as we begin the rest of the year, the situation reverses, and it is a challenge to remain focussed on the Torah aspect of the days, to continue to live in a Torah world and a Tishrei world. But an antidote to this is to be proactive about continuing to be אסתכל באורייתא in the most literal sense: We have to make sure to strengthen and increase our shiurim and kviusen in nigleh and chassidus, to put more effort in our involvement with, and connection to, Torah.

Through our active effort to continue to be intensely immersed in limud haTorah, we can ensure that even during the “mundane” months of the year we will continue to live in the world of Torah, and continue to be recognizable as the chosid from Tishrei, and this will bring about the ultimate goal and objective of dira batachtonim!