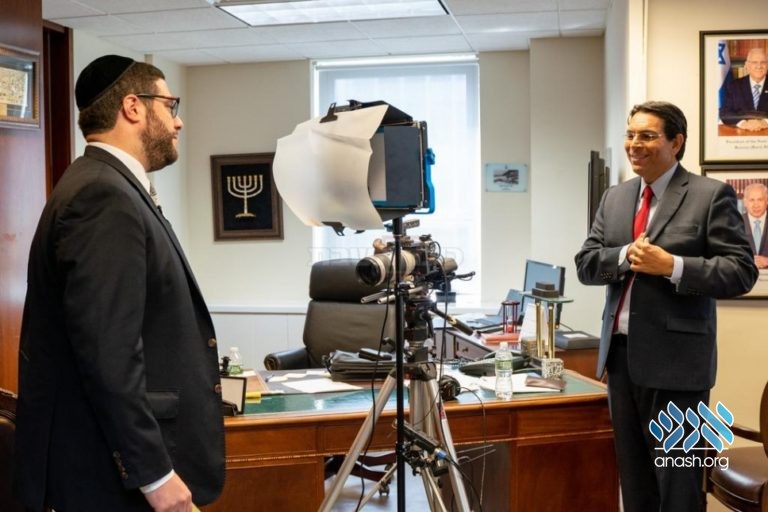 RB: Do you think there is place for further involvement of the Charedi society at the Ministry of Foreign Affairs, and in Israel’s Foreign Service?

DD: Definitely. It’s about time. The time has come for it, and it is disappointing that it has not happened until now, there is a place for that. They are part of Israel’s public face and image. And there is great power to it when a Charedi who comes and represents the position of the State of Israel: that is a very powerful thing. Bold action must be taken in this regard, to push for it to happen – I think this is really important. By the way, at events I organized at the UN, I invited Rabbis – Pesach Seder that I organized here every year, on Chanukah, and Tashlich –

RB: You have become a Shliach Habad at the UN –

DD: Just about. We also brought in Chabad Shuichim to speak, but yes, I almost turned into a Shliach Habad. And Ambassadors looked upon in awe and admiration: “hold on, the Rabbi is here!” One of the Ambassadors, when we traveled to Israel together – I hosted a Shabbat meal at a hotel. And it was Shabbat KeHilchata, with full observance, all the traditional aspects, Kiddush, and Shabbat songs. One of the Ambassadors came to me, from Africa, and said: Danny, this has been the most moving evening in my life. Now, for me and for you, Rabbi, Shabbat is important, it is part of our life, but we are already used to it, every week we enjoy Shabbat. But for that Ambassador – and I still see him here at the UN, and he says to me – Shabbat Shalom! Shabbat Shalom! –

RB: Even on Monday he says Shabbat Shalom –

DD: Every day he sees me he exclaims: Shabbat Shalom! – because the experience was so deeply moving for him. We told them to wear white shirts, we went to the Kotel, we returned to the hotel, welcomed Shabbat – and that is something they will never forget!

RB: Do you feel that you have come closer to Judaism, embraced it to a greater degree since coming to New York?

DD: Look, I have always been very connected to Judaism, closely connected to Jewish communities – but in my capacity today, I certainly represent not just myself, not only the State of Israel – I represent the Jewish People. And when I hosted an event that we worked very hard on, an event on fighting anti-Semitism at the UN General Assembly – it was very hard to convince Ambassadors from Europe and South America – and in the end we achieved a majority, gathered the Assembly, and invited the Rabbi from Poway, San Diego to speak –

DD: Rabbi Goldstein, who did a wonderful job, in my opinion – that was the message.