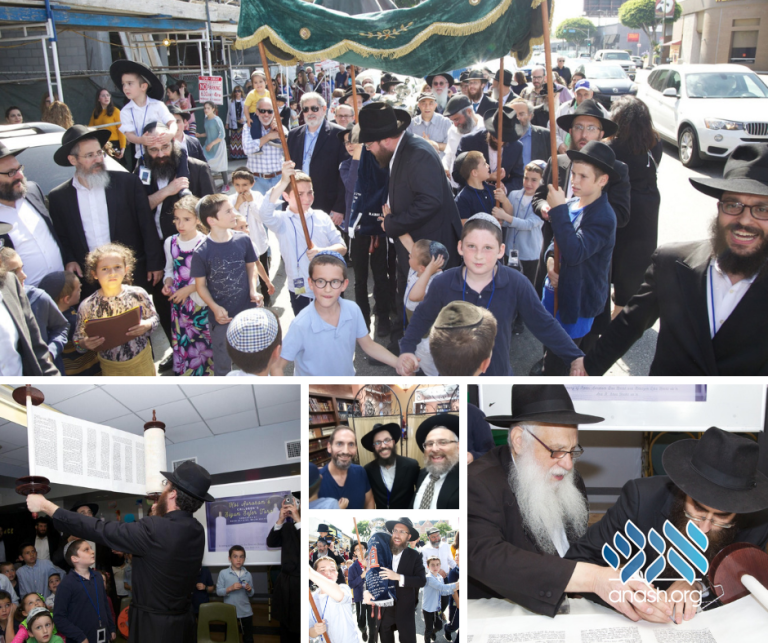 Last week, hundreds of men, women and children gathered in Los Angeles to welcome a special Sefer Torah, the first of its kind in the rapidly growing community of Pico-Robertson.

The Torah was dedicated in loving memory of Rabbi and Rebbetzin Avrohom and Liba Hecht to whom the Kol Avrohom Youth program is dedicated. It was also in memory of Hatomim Yehoshua Hecht, dear son and brother of the Hecht family who passed away earlier this year.

Rabbi Dovid Nissen Bressman, a renowned sofer whose children attend Kol Avrohom, oversaw the completion of the letters. The z’chus of filling in the last letters was given to members of Bais Bezalel.

The last letters were filled in by Rabbi Moshe Levin, rav of Bais Bezalel, and Rabbi Eli Hecht. Rabbi Hecht noted that the last two letters, Alef and Lamed, are the initials of his dear parents, R’ Avrohom and Liba, in whose memory the Torah was written.

The siyum, which was attended by many rabbanim, shluchim, and members of the community, began at Bais Chaya Mushka. After the Torah was completed, the crowd accompanied the Torah as it was paraded down Pico Boulevard towards Bais Bezalel, home of Kol Avrohom. Following lively hakofos and a fully catered meal, each child received a beautiful badge with material from the new Torah’s mantel on it.