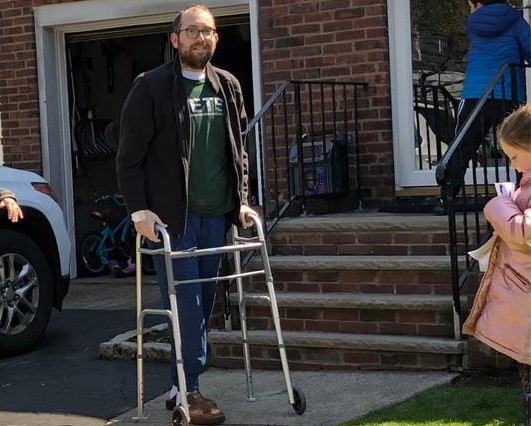 Michael Goldsmith, a 34-year-old father from New Jersey was in a coma with COVID-19. The doctors say they have no idea how he recovered, but Shliach Rabbi Mendy Kaminker says he may know the reason.

By Rabbi Mendy Kaminker for Chabad.org

“While unconscious, his family and community fought for access to remdesivir, which they feared was his last chance of survival.

“Eventually, Gilead, the company that manufactures the drug, made remdesivir more accessible, but doctors said it was too late for Goldsmith to benefit. Goldsmith recovered without it, and doctors don’t know exactly why.”

When I saw the above paragraphs in an article in Business Insider, I wanted to shout out loud: The doctors don’t know why, but I do!

It started when a friend of mine, a Chabad rabbi in Florida, sent me a text message: “Look at this tweet. Someone at Hackensack University Medical Center. Maybe you can help?”

The tweet was about Michael Goldsmith, a 34-year-old father from Bergenfield who was hospitalized in Hackensack due to COVID-19. He was in an induced coma and on a respirator, and his family was fighting for him to receive remdesivir, an experimental drug that was reportedly helpful with severe cases of the coronavirus.

But for whatever reason, the drug company refused to provide the medicine.

Usually, I’d quickly make my way to the hospital to visit with the family and see how I could help. But with COVID-19, this is no longer possible.

So I asked my friend if he knows anyone in the family. I wanted to talk to them and understand the situation. “Honestly,” replied my friend, “not really. I just came across this tweet. Let me see if I can connect with the family.”

In the next couple of hours, I kept hearing more and more about this case. Michael must be very loved, because many people took to social media to protest the decision by the drug company and to demand that Michael receive the medicine. They even started a Twitter hashtag, #savemichaelgoldsmith, to apply public pressure on the company.

Then my phone rang. It was Michael’s father-in-law, Dr. Jack Stroh.

“My name is Jack. I have a son-in-law on a respirator at the HUMC. His name is Michael Goldsmith.”

“Yes, I’ve heard about him. We’ve been praying for his recovery.”

“I will be honest. I don’t even know why I’m calling or how you can help me, but my family insisted I should call.”

To be honest, I also had no clue how to help. At first I thought that perhaps the decision to give the drug was in the hands of the staff at HUMC. I have gotten to know some of the amazing medical staff, and I would have been more than happy to call them to discuss the matter.

But Jack made it clear that the decision was in the hands of the drug company, which is headquartered in California. The hospital staff had gone above and beyond to try to get him the drug, but to no avail.

“You know what,” he told me, “I tell my daughter that yes, we need to fight for the remdesivir. But is that what’s going to heal our Michael? No! G‑d is going to send him the refuah [healing], and he can do it without the medicine, too!”

I listened in awe.

“Let me tell you a story,” Jack continued. “I’m a cardiologist. One time I was treating a very sick patient who was a member of my community. His situation was dire, and I informed the family that his days were numbered. It was right around Passover time, and they made sure to book rooms at a nearby hotel so they would be able to say goodbye.

“A few days before Passover, at a community gathering, our rabbi suggested that we all pause and pray for my sick patient. And then a miracle happened. Slowly but surely, his situation started to improve, and eventually he was released from the hospital.

I was so inspired that I almost couldn’t speak. He called me to get help . . . but I think that I was the one being helped by this conversation.

Then I realized that there was something I could do for Michael.

At that moment, I was adding the finishing touches to an online live lecture with Rabbi YY Jacobson, to be broadcast on Chabad.org. “Jack, we’re going to take a few minutes during the broadcast and have people all over the world pray for Michael, and the power of prayer will bring miracles again!”

Indeed, at the live lecture, we prayed that Michael and everyone else battling COVID-19 have a complete and speedy recovery.

But that wasn’t all. Michael’s family and friends organized non-stop Tehillim (Psalms) recitation, Torah learning and mitzvahs in his merit.

Fast-forward three weeks . . . A miracle! Michael was back home!

The doctors don’t know how he recovered.

But I think I do.

It was the power of faith and prayer.