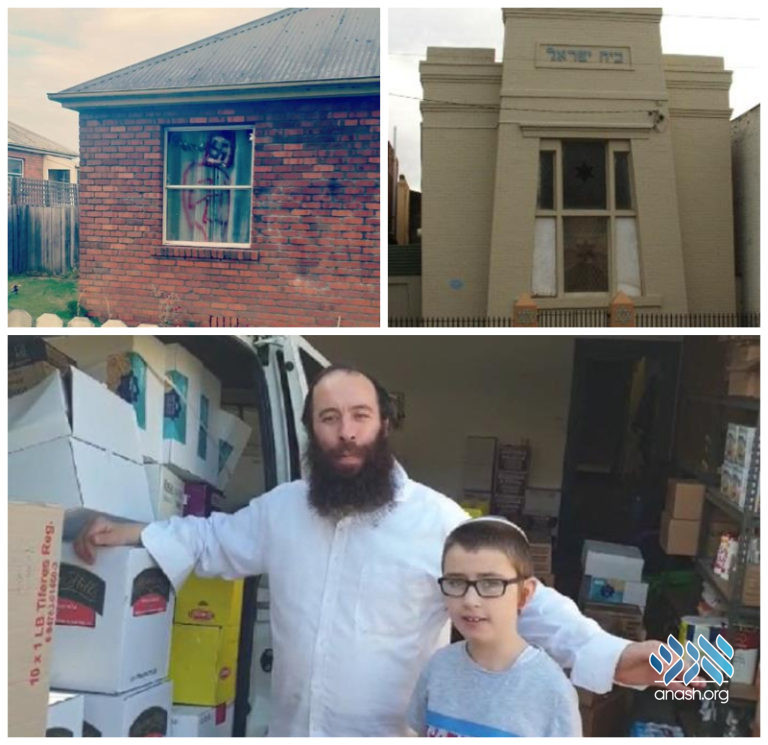 When the coronavirus pandemic blocked a Pesach shipment for Rabbi Yochanan Gordon and Tasmania’s Jews, it was the actions of local Neo-Nazis that helped arrange a shipment.

In late February, Tasmania’s Jewish community was rocked from its tranquil existence by a string of anti-Semitic displays—a synagogue defaced and swastikas prominently displayed in front of a home—horrifying local residents and the state as a whole.

Tucked away in a hidden corner of the world, separated from mainland Australia by the Bass Strait, Tasmania is home to Australia’s two oldest synagogues, in Hobart and Launceston, respectively. Tasmania’s estimated 1,000 Jews are spread across the vast state, from Queenstown to Dover. These island Jews are served by Tasmania’s only rabbi, Rabbi Yochanan Gordon, who with his wife, Rochel, direct Chabad-Lubavitch of Tasmania. The Gordons are based out of Launceston, but the rabbi travels across the island to serve pockets of Jews in Hobart and other towns.

For the third time in 10 months, the facade of Launceston’s 176-year-old synagogue had been desecrated, black markings crudely drawn over the Star of David. Less than a month later, a woman made news for hanging Nazi flags in the window of her house, this after previously spray-painting swastikas on the home’s exterior.

As the community came together in condemnation, lawmakers and officials expressing their abhorrence, the rabbi had another challenge looming on the horizon.

With the approach of Pesach, Gordon planned on traveling to Melbourne on the mainland, as he does every year, to procure his community’s Pesach staples—matzah, wine, kosher meat and other kosher-for-Pesach items—that aren’t available locally. From Melbourne, Gordon would ship the items to Launceston, where he’d open a pop-up shop, and then hand-deliver supplies to Jews scattered around the rest of the state.

With the coronavirus pandemic beginning to threaten Tasmania, the island state imposed a 14-day quarantine on all arrivals from mainland Australia—“Fortress Tasmania,” as Tasmania’s premier would later dub it—so the rabbi had to stay put. After seeking help on social media, the Gordons connected via Facebook with volunteers Aran Haupt and Alan Oshlack from Melbourne.

“Someone sent me a screenshot of someone saying, ‘Hey, I’ve got a friend in Tasmania who needs a hand.’ And little did we know that this is what was going to happen,” Haupt tells Chabad.org of the genesis of the project he dubbed “Operation Tasmania.”

Haupt contacted Gordon. The rabbi explained to Haupt the dire situation that the Jewish community of Tasmania was in, with the potential of not having access to matzah and kosher for Pesach food for the holiday. “For us, that sounds like an absolute travesty,” exclaimed Haupt.

But long delays in shipping due to the new restrictions threw a wrench in their plans—“Don’t expect anything until mid-April,” the shipping company said. Fearing the state would soon go into lockdown, which would make his pre-holiday distribution impossible, Gordon knew he had to act fast.

Pondering on how to proceed, the rabbi received a phone call out of the blue. After a delay of several weeks due to the influx of coronavirus-related content, a newspaper story about the recent spate of neo-Nazi anti-Semitic incidents had just published, featuring an interview with Rabbi Gordon. Now, Tasmanian Sen. Eric Abetz was on the line. “I didn’t know we had a rabbi in Tasmania,” he told Gordon, inquiring if there was any way he could help the Jewish community.

Senator Eric Abetz, chair of the Australia-Israel Parliamentary Friendship Group, is a staunch supporter of Jewish causes. “Having read the article on Saturday,” Abetz told Chabad.org, “I thought I’d better ring the rabbi on Monday, and see how the community in Launceston was getting on; hopefully the anti-Semitism wasn’t too widespread. Anything I could do—I would do.” Pleasantly surprised by the unexpected call, Gordon informed the senator of his community’s predicament, and Abetz said he would see what he can do.

Not 10 minutes later, Abetz called back, and told the rabbi to call the CEO of Spirit of Tasmania, a ferry line between Melbourne and Tasmania, who was willing to assist.

Bernard Dwyer, the CEO, offered to carry a van full of the Jewish community’s Passover supplies onboard the ship and sail it to Tasmania, free of charge.

Abetz says that Jewish causes are close to his heart. “I see the plight of the Jewish people over centuries as being a blot on humankind.” As a young man, active in student politics, he observed the way Israel was constantly being attacked, and committed to speak up. “The Jewish cause is right and just,” he adds.

Born in Stuttgart, Germany, in 1958, Abetz’s family moved to Tasmania when he was just a toddler. “My father fought in WWII—on the wrong side,” he recalls. Upon arriving in Tasmania, his family became close to a Jewish couple, the Gratzers, who’d fled the rise of Nazism and sought refuge in Australia. His great uncle, Otto Abetz was a high-ranking SS officer and a Nazi diplomat in occupied France, tried and convicted in 1949 for crimes against humanity; Field Marshall Erwin Rommell, the “Desert Fox” was a maternal cousin. Eric never knew his uncle. “He was involved in deporting Jews from France to Germany,” where many would perish in the death camps. “It is a blot on the family name,” he notes, “If I am able to do something to rectify that, I would be very thankful to do that.”

Rabbi Yochanan Gordon and son with the van and its precious cargo, which gave the rabbi ample time to distribute the goods to Tasmania’s Jews in a manner that complies with social-distancing regulations.

Meanwhile, in Melbourne, Haupt coordinated the logistics and Oshlack drove a commercial van—borrowed from a local Jewish company—all over town, gathering Tasmania’s Pesach goods from local stores and wholesalers.

The van and its precious cargo arrived safely the next morning, giving Gordon ample time to distribute the goods to Tasmania’s Jews in a manner that complies with social-distancing regulations.

“This was a real team effort,” Gordon noted, “We needed everyone’s help so this could all fall into place; we’re so grateful to the Melbourne Jewish community.”

As Haupt and Oshlack loaded the van onto the ship, Oshlack turned to Haupt and remarked: “I’m not a religious person, but this felt like there was Something else involved.”