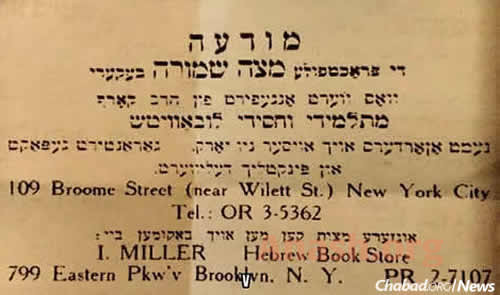 There’s nothing more pleasant on a cold New York winter’s day than the smell of freshly baking matzah wafting up the street. Outside the Lubavitch Matzah Bakery’s metal doors in Brooklyn’s Crown Heights neighborhood sits the world as it is, cold and blustery; inside, it is Passover. Workers have been baking handmade shmurah matzah since at least October, churning out the flaming discs to meet demand, which has grown dramatically in the last 60 years. This year, more than 1 million pounds of the traditional round variety will be produced in the United States alone.

It was in 1954 that the Rebbe—Rabbi Menachem M. Schneerson, of righteous memory—first began talking about the importance of eating authentic shmurah matzah, encouraging his followers to distribute it to every Jew they met. From New York to Boston and Chicago to Los Angeles, early Chabad-Lubavitch shluchim began ordering matzah from the Lubavitcher matzah bakery in New York and giving it out in their respective Jewish communities.

As the network of Chabad emissaries grew, so did the annual matzah distribution. Jews who had just a short time earlier not even known of the existence of shmurah matzah’ started to rely on it for their seder, forming new family customs.

Today, far from being a niche product, handmade shmurahmatzah can be found in national supermarket chains such as Costco, Pathmark, Jewel-Osco, Albertsons and Stop & Shop.

As 81-year-old Brooklyn-born Tzal Rotter remembers, authentic shmurah matzah was once a rarity.

The Lower East Side to Brownsville Express

At Primo Hatters, a block-and-a-half from the bakery in the Crown Heights neighborhood of Brooklyn, Rotter sits, the morning paper folded over his knee and a newsboy cap resting on his head at a jaunty angle. He grew up in the borough’s Brownsville neighborhood, at the time a lower-middle-class Jewish neighborhood packed with immigrants and their American-born children. His father was a kosher butcher who had emigrated from Poland in 1928, and Rotter and his siblings spent the weeks before Passover helping their father in the butcher shop, packing orders and delivering them at night.

“We had to take out the chicken pupiks [Yiddish for ‘gizzards’] without opening them up,” recalls Rotter. “Before Pesach, you had to do it very carefully—to clean it out so the chometz in the stomach didn’t get into the rest of the chicken.”

On the eve of Passover, after finishing up the final holiday meat and poultry orders, Rotter’s father would close up shop and the two of them would make the long trip to Manhattan’s Lower East Side, taking a bus over the Williamsburg Bridge to get to the Poilisher handmade matzah bakery, a mom-and-pop shop run by Chassidic Jews of Polish stock.

“I remember it being the only matzah bakery around,” says Rotter. “It was in a tiny house with a storefront, and the bakery was downstairs in the basement.”

Carrying the box carefully by its twine string, they’d rush back to Brownsville with the round shmurah matzah, arriving home shortly before the holiday began. That evening, Rotter’s father would lead the seder with the special matzah.

“There weren’t many people who used shmurah matzah,” says Rotter. “My friends, they mostly had boxed machine matzah: Streit’s or Manischewitz or whatever.”

“That was the first time I saw shmurah widely used, when I came to Lubavitch,” he says. “I was 12.”

A Bakery of Their Own

Back in January 1950, two years after Rotter joined the Lubavitcher Yeshiva’s younger division, 20-year-old Rabbi Gedalya Korf arrived from Europe to join the older one. The Russian-born Korf had escaped from the Soviet Union together with his family in 1946, and after making it to a displaced persons camp in Germany, the family landed in Paris.

Korf reached New York at what proved to be a time of momentous change. Not long after disembarking Korf and a few fellow yeshivah students entered the sixth Rebbe’s office for a private audience, a day that turned out to be the last Sunday of the saintly rabbi’s life. R. Yosef Yitzchak passed away not a week later, on the 10th of the Jewish month of Shevat, which that year corresponded to Jan. 28. One year later, on the first anniversary of R. Yosef Yitzchak’s passing, his son-in-law, the Rebbe, formally accepted leadership of the Chabad movement.

Korf remembers only two shmurah matzah bakeries in operation at the time, both on the Lower East Side and catering to a small Orthodox clientele, primarily Chassidic Jews.

“The Rebbe Rayatz [a Hebrew acronym for R. Yosef Yitzchak] received his matzah from the Poilisher bakery,” recalls Korf. On the morning of the eve of Passover, a delegation of yeshivah students would take the subway to the bakery and personally prepare the sixth Rebbe’s matzahs.

In 1953, Korf’s parents and siblings crossed the Atlantic to settle in New York. His father, Rabbi Yehoshua Korf, who passed away in 2007 at age 102, was born in Kremenchug, Ukraine, and educated in underground Chabad yeshivahs throughout the Soviet Union. (He served as director of the secret yeshivah in Kharkov in 1929, before it was closed due to pressure from authorities).

Not long after moving to New York, the elder Korf decided to open a business. According to his grandson, Rabbi Pesachya Korf, the elder Korf approached the Rebbe with a number of business ideas which the Rebbe advised against. When he informed the Rebbe that an opportunity had come up to open a bakery and asked whether that was the path for him, the Rebbe immediately gave his blessings. In 1954, Korf opened his shmurah matzah bakery at 109 Broome St. on Manhattan’s Lower East Side.

“I was more than involved” in helping to set up the bakery, recalls his son, Rabbi Gedalya Korf. Although it, too, was a small bakery, the younger Korf began implementing a number of innovations. He set the bakery up with distinct zones, starting with the room where the flour and water are mixed, followed by the rolling station, and lastly, the oven for the baking. He also built separate rooms for the flour and water, each containing a window, with the mixing area situated between them. These innovations, which streamlined and simultaneously ensured a more kosher baking process, were subsequently adopted by other matzah bakeries and are today industry standards.

Although Korf’s shmurah matzah bakery was a private business, for Lubavitchers—many of whom had risked their lives in Soviet Russia for the sake of baking and consuming the ancient food of faith—it became a community institution. Finally, they had a matzah bakery of their own—one they did not have to keep hidden from persecuting authorities and prying neighbors, an American coming-of-age for a movement scarred by Russia.

Korf was a respected Chassid who throughout his long life served as a mentor within the Chabad community. After his bakery opened, Korf’s punctilious attention to halachicstrictures quickly became widely known. According to Rabbi Pesachya Korf, the famed Rabbi Moshe Feinstein—one of the foremost halachic arbiters of the 20th century—insisted on purchasing his personal matzah from Korf’s bakery.

In the spring of 1954, not long after Korf’s bakery opened, the Rebbe began publicly speaking about the importance of distributing round, handmade shmurah matzah. Chabad emissaries, at the time still small in numbers but already widely scattered geographically, took the Rebbe’s words to heart and began handing out the crispy, irregularly shaped matzahs (since they are made by hand, each one comes out looking different, as opposed to the square machine type, which are uniform).

The Rebbe’s insistence that shmurah matzah be made available around the country emerged in curious ways. In one notable example, the Rebbe arranged that Chabad’s central educational organization, Merkos L’Inyonei Chinuch, pay for Korf’s shmurahmatzah advertisements in Chicago through the Chabad emissary there at the time, Rabbi Shlomo Zalman Hecht.

The Lubavitch Matzah Bakery, now owned and operated by Rabbi Yitzchak Tenenbaum, moved to the Crown Heights in the late 1960s, and this year will have produced north of 100,000 pounds of matzah. Today, a half-century since opening as the first shmurahmatzah bakery to look outside the confines of the Chassidic community, it continues its mission: supplying Jews of all backgrounds with the food of faith—the same round matzah their ancestors once ate.

See the second part of the series HERE.

Share with us your thoughts and opinions – [email protected]