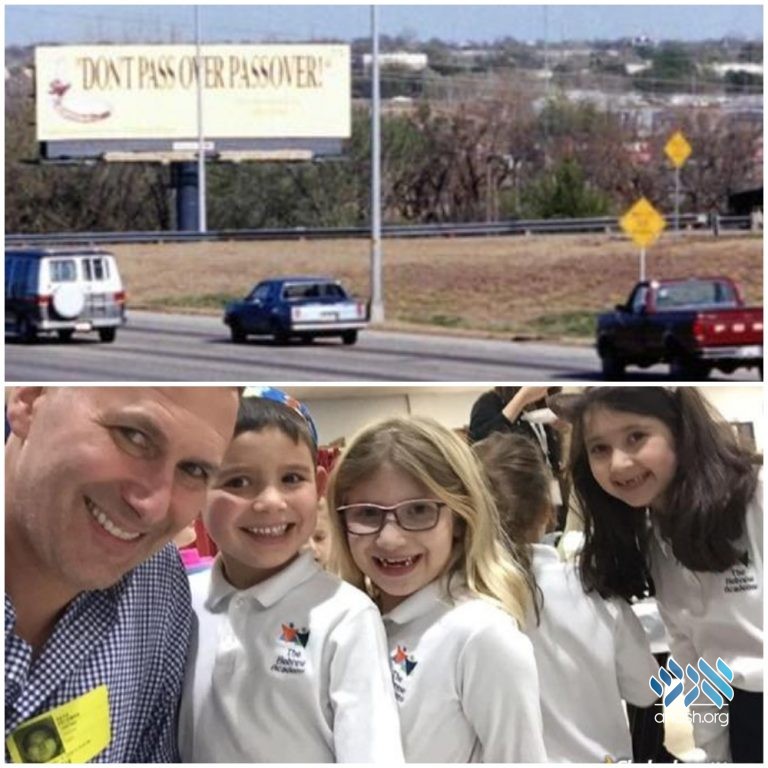 Sometimes, all it takes is a billboard. In the middle of Oklahoma, no less.

Seth Feldman grew up in the Bayside neighborhood of Queens, N.Y., where, in his words, “everyone was Jewish.” In an environment like that, being Jewish was only natural, and young Feldman didn’t give it much thought. Then he left home—first as a student at Northwestern University in Evanston, Ill., and then traveling throughout the country in the context of his budding television-production career. Suddenly, he was forced to reckon with his Judaism in an entirely different way. Over the decades, and with the help of rabbis and mentors in the various places he’s lived, Feldman grew closer to his roots. Today, he leads an observant Jewish life in Manalapan, N.J.

But on a visit to his alma mater late last year, a chance encounter at a Shabbat meal sparked a long-forgotten memory: The starting point of his Jewish journey when he was still a student at Northwestern in the early 1990s. It happened on a lonely highway in the middle of Oklahoma.

“As an alumnus, I’m still an avid fan of Northwestern’s football team,” Feldman tells Chabad.org. So in October 2019, he decided to catch a game, traveling with his son, Oren, from their New Jersey home to the Chicago area.

Mindful of the fact that he would be there for Shabbat, Feldman phoned Rabbi Mendy Weg of Chabad-Lubavitch of Northwestern University to make arrangements. Weg was happy to help, and so there they were—Weg, Feldman and his son, and dozens of Jewish college students sitting together for Shabbat dinner that October night.

A Student’s Roadside Encounter With Judaism

Playing the typical game of Jewish geography, Feldman asked Weg where he was from. Atypical to the average Orthodox Jew, Weg responded that he was from Tulsa, Okla., where his parents, Rabbi Yehudah and Etel Weg, have served as Chabad emissaries since 1987.

“That’s when I had the flashback,” says Feldman, one he shared with the rabbi and students.

“When I was a student at Northwestern University, I was on the rowing team. During Spring Break, we trained in warmer climates. One year, we trained down in Austin, Texas. It was a great opportunity for rowing, but it was horrible timing: I completely forgot it was Passover that week.”

Fortunately, on that first night of Passover, he was able to join a Seder at the University of Texas. But on the second night, he found himself on the team bus heading back to Chicago.

“I was feeling sad and angry with myself,” recalls Feldman.

And it was then, as the bus sped down the highway somewhere in Oklahoma, that he saw the sign that changed his life forever. As the ruminations of a passed-over Seder were festering in his mind, he looked up and saw a billboard emblazoned with the words, “Don’t Pass Over Passover,” together with a picture of matzah and wine.

“I was so upset with myself on that bus that night that my teammates noticed and asked me what was wrong,” he says. “When I saw that sign, I decided that I would never miss a Seder again. I felt that G‑d was showing me a sign, and I wasn’t going to miss it.”

And, as they say, the rest is history.

Well, not quite: From Aruba to Honolulu—where he grew especially close to Chabad of Hawaii’s Rabbi Itchel Krasnjansky—to Los Angeles, New York, Portland, Hoboken, N.J., and finally Manalapan, Feldman embarked on a Jewish journey that changed his life.

And he’s actively shared that journey as well. Together with their local Chabad rabbi, Rabbi Levi Wolosow of Chabad of Western Monmouth County, Seth and his wife, Stacey, helped create an innovative High Holiday service dubbed “Project Rosh” that attracts more than 500 people annually. Feldman is the proud gabbai, and uses his marketing and narrative skills to spread the message near and far.

It’s a journey that, in his words, “is far from over.”

Rabbi Yehudah Weg of Chabad of Tulsa, of course.

“The funny thing is that there was a good chance that the sign would never have happened,” the elder Weg remembers. “I never really thought of putting up billboards; it’s an expensive project. It so happened that for that year in the early ’90s, the Shluchim Office in New York arranged a nationwide billboard campaign, securing funding for the rental, design and all other logistics. All we rabbis had to do was pay for the printing and installation, which amounted to $400.”

But back then, even $400 wasn’t a small sum for Weg’s fledgling operation, and he hesitated.

What swayed him to go ahead?

When he personally visited the billboard site over the highway, he saw that the current advertiser was Coca-Cola. “If Coke is advertising here, there must be something to it,” he reasoned. He paid the money and before long, “Don’t Pass Over Passover” with Passover graphics blared across the Sooner State Highway.

For 30 years, Weg had no idea how impactful that sign turned out to be. It took decades, a football game, a Shabbat meal and his own son’s Chabad center in Chicago for him to find out.