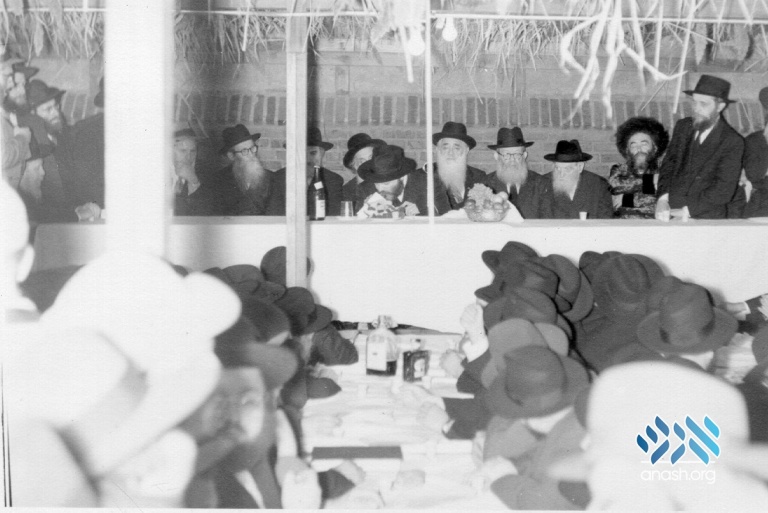 Beginning in Riga and Poland in the 1930s, each year on Chol HaMoed Sukkos, the Rebbe would hold a special gathering in the Sukkah, which was advertised as being geared towards Yeshivah students. “It was printed in the paper,” the Rebbe began one such Farbrengen, “that this gathering is specifically for Yeshivah students, whose primary focus is studying Torah.” The crowd at these Farbrengens was largely from non-Chabad Yeshivos, and the Rebbe would address them for hours, explaining many concepts in Torah.

In the days leading up to Sukkos, Ashreinu.app, JEM’s audio app, has located and restored the recording of two of these Farbrengens. The Farbrengen of the night of 18 Tishrei 5714 (1953), has been published for the first time from the WLCC archives.

You can now listen to almost two hours of Sukkos content, and understand the meaning behind all the Mitzvos of Sukkos, beautifully explained according to Nigleh, with lessons from Chassidus in the service of Hashem.

Beginning from all the details of the Simchas Beis Hashoeva celebrated in the Beis Hamikdash, continuing with each of the four species used on Sukkos, and the Schach of the Sukkah. Each concept is explained according to Nigleh, and then further illuminated with it’s deeper meaning and lessons in the service of Hashem as explained in Kabbalah and Chassidus.

The main focus of each of these Sichos is the unique role of Yeshivah students; to harness their youthful energy and channel it into diligent Torah study.

“Today, even the Rosh Yeshivah does not study Torah full time, rather, after the “Afternoon Sacrifices” he goes home to eat supper or dinner. The students, however, truly have a full time occupation of learning Torah, for even after Mincha they still have to sit for many more hours learning and reviewing the Shiur, and they have a Mashgiach who doesn’t allow them to sit idly. They must sit on the benches for hours and learn Gemara, Tosafos, Rambam or Chassidus until dawn breaks, just like the Simchas Beis Hashoeva in the Beis Hamikdash”.

Learning a Lesson from the Lulav, which must come from a tree that actually grows fruit and not just capable of producing, the Rebbe tells the students;

“It is not enough to be in a Yeshivah surrounded by those who study Torah, and be capable of learning. One must actually sit and learn on his own, and produce fruits.”

“The Alter Rebbe said that one can learn a lesson from a thief. Just as a thief is not one who would be able to steal if he worked on it, but rather one who goes and actually takes something from another’s possession, so to a Lamdan is not one who has the potential to study, but one who actually sits and toils in Torah study”.

The Rebbe also encourages the students to not only learn themselves, but to help and influence others, bringing them into the world of Torah.

“The prescribed Halachachic measure for a Lulav is that it must be tall enough “to be able to shake [the other species]”. We hold the Lulav higher than all other species, and wave it above, reaching out to those on a high level, and bring it down below to those still on a low level. The lesson for Yeshivah students is that they must reach out to those around them as well, bringing them closer to the light of Torah”.

Toward the end of the Farbrengen, the Rebbe dedicates a Sicha to emphasizing the importance of learning Chassidus every day.

“Certainly everyone expects me to speak about learning Chassidus, so I will not keep the crowd waiting. “Her zich ein Yidden — listen up!” One must learn Chassidus every day. This is an obligation according to Nigleh also, for one has to study all parts of Torah, and can’t leave half of Torah unlearned.”

The Rebbe encourages the study of Chassidus every day, and explains how this will not only not distract, on the contrary will give added benefit in studying other parts of Torah.

Transcript of the Farbrengen from Laha”k available here.

Also published for the first time is a Sicha from the Sukkos Farbrengen of 5713 (1952). This Farbrengen was preceded by another gathering the night before, where the Rebbe promised to speak again the following night about Hakhel. One Sicha of the first Farbrengen was previously available, and here we present one track of the second Farbrengen, which captures most of the first Sicha. We have done our best to restore this tape, however, the quality remains low.

Transcript of the Farbrengen from Laha”k available here.

Thank you to Rabbi Yisroel Noach Vogel for providing this tape for the benefit of Ashreinu listeners.