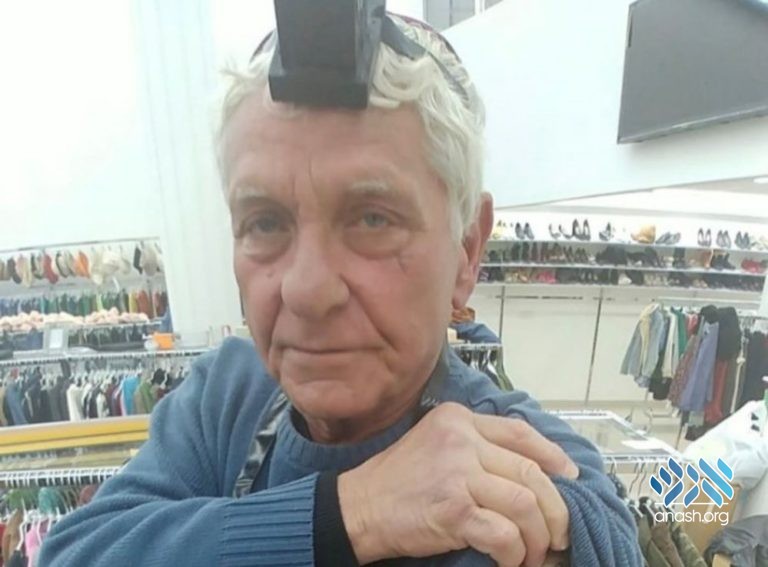 After running from his Yiddishkeit for 60 years, a child of Viznitzer chassidim agreed to put on tefillin. Observers were amazed to see that he had kept a reminder of his roots with him all along.

Menachem Segal, a Lubavitcher chossid from Lod, was at a retail store in Ramat Gan on Tuesday, visiting a client. He was working on the store’s computer when an elderly man approached him and said hello in Yiddish, col.org.il reported.

Mr. Segal was rather busy, so he returned the man’s greeting and attempted to get back to his work. He soon realized, however, that the man needed to talk. The visitor, seeing he had Mr. Segal’s attention, began to tell him his life’s story.

The elderly gentleman was born in 1946 in a refugee camp, to Holocaust survivors from the well-known Vitznitzer Tessler family. When he was 13, his parents sat him down and told him what had happened to them and their families during the horrors of World War II.

At that time, before the implementation of formal Holocaust education and the publication of many of the stories and biographies we have today, most people were unaware of the extent of the horrors perpetrated by the Nazis, especially a sheltered chassidishe child.

The young boy was utterly horrified, and to his parents’ dismay, he decided to stop being religious. He later joined the IDF and became a career soldier, fighting in all of Israel’s wars and eventually retiring with the rank of Lieutenant Colonel.

Mr. Tessler concluded by telling Segal that he’d recently found his heart returning to Yiddishkeit, and that he had begun to daven at home – but without tefillin. “My tefillin are in my heart,” he said. “I’ll never put on tefillin.”

Mr. Segal responded that of course he must put on tefillin, but Mr. Tessler refused. However, he wouldn’t give up and eventually, the elderly man agreed to put on tefillin shel yad. When Mr. Segal returned from his car with the tefillin, he saw the store owner observing the scene with a shocked expression on his face. Seeing this, he offered to take it outside.

Mr. Tessler would not hear of it. “Mah pitom! We’ll do it here in the middle of the store so everyone can see.”

While rolling up Mr. Tessler’s sleeve, Mr. Segal was shocked to find a tattoo of a star with Jude written inside it, copying the stars Jews were forced to sew on their clothing during the Holocaust. Even while running away from the religious upbringing up his youth, he had left himself a permanent reminder that at his core, he is a Jew.