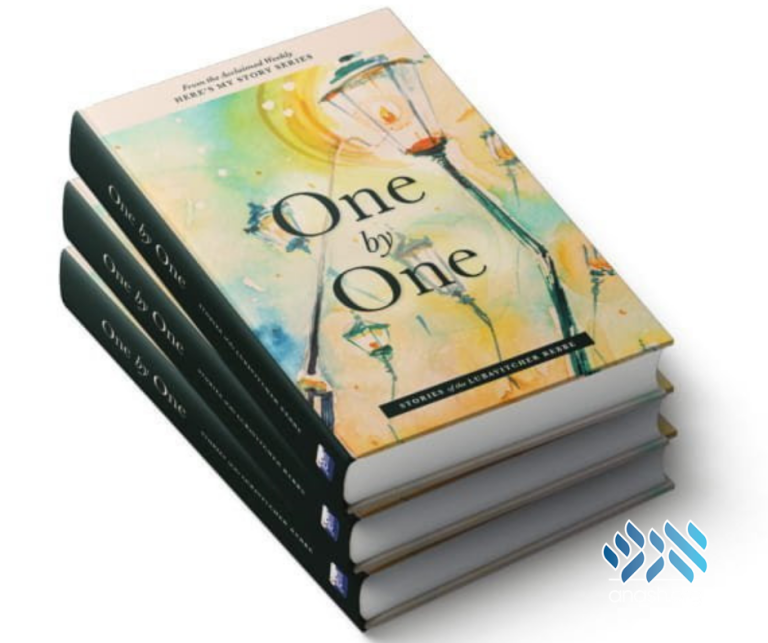 After six years of distributing Here’s My Story newsletters, JEM is now publishing a selection of some of the greatest in a new book entitled One by One, highlighting the Rebbe’s guidance of the individuals that came through his door.

Every week, people arriving in shuls around the world are met by the latest weekly installment of Here’s My Storynewsletter. It features one of the thousands of stories and personal encounters with the Rebbe that Jewish Education Media (JEM) has recorded as part of its long-running My Encounter with the Rebbe oral history project.

“The feedback we constantly receive is overwhelming,” Rabbi Yechiel Cagen, the director of the My Encounter project, attested proudly. “Readers consistently tell us how they have been moved and inspired, humbled and awed by the Rebbe’s foresight, advice, sensitivity and leadership.”

What emerges from the composite of stories compiled in One by One is a picture of a leader who cares deeply about every Jew, no matter how ordinary his or her problems might appear in the grand scheme of things – a leader who utilized every encounter to guide people to fulfill their unique mission in this world.

“As the twenty-fifth anniversary of Gimmel Tammuz approaches,” noted Rabbi Yecheskel Posner, who has been managing the publication of these first-hand accounts, “it is clear that we need to share this priceless treasure of stories that we painstakingly accumulated over the course of the past six years. The time had come for us to turn our archive to the public.”

Rabbi Posner recalled how he and his colleagues at JEM combed through the 350 issues of Here’s My Story that were published thus far, and selected 66 favorites. “Each account discloses another angle of the Rebbe’s life, another opportunity to glimpse and learn from his far-reaching wisdom,” he added.

As a wise and discerning leader, the Rebbe took responsibility for Jews who were going through dangerous times all over the world – whether in Israel, Iran and elsewhere in the Middle East, or in South Africa, or in the Soviet Union and its satellite states in Eastern Europe. One by One sheds light on the Rebbe’s influence on the world stage as he guided countless ordinary people in their quest to navigate uncertain circumstances with a clear vision of what the future would bring.

But while some of these stories illustrate how the Rebbe’s guidance impacted global matters, most demonstrate how the lives of ordinary individuals were forever changed by his concern for the mundane details of their everyday lives.

By presenting testimonies of people from diverse backgrounds, One By One imparts a broad and nuanced view of the Rebbe’s interactions. The Rebbe’s uncanny ability to reach out to each person in their language is captured in the book by featuring stories of people who are religious and secular, children and adults, men and women, public figures with tremendous influence as well as private people. It can be revealing to analyze how the Rebbe’s tailored advice differs depending on whom he is communicating with.

One by one has an easy to read, sleek format

Other stories in the book bring to light miraculous results of the Rebbe’s brachos. But perhaps the most vital part of the book is the advice and direction that the reader can glean from it. By learning how the Rebbe guided and directed his chasidim, the reader can come away with the insight and drive to tackle today’s challenges, affirming the truth of the Rebbe’s statement to author Simcha Raz:

“There is a lot to be learned from the lives of righteous people – such stories penetrate the hearts and seep into the soul … Sometimes they influence the readers more than words of Torah.”

As Mr. Joseph Roisman, the executive vice president of Perry Ellis International, and an avid reader of the stories, summed it up,

“I did not have the privilege to meet the Rebbe, but reading the stories of others that were inspired by his wisdom, makes me feel that I visited with him and learned from him. This book moved me deeply to become a better person, a better Jew and, possibly most importantly, to have a positive impact on my surroundings. I strongly recommend reading it and giving out to your friends and family.”

For more information, or for bulk orders, contact [email protected]