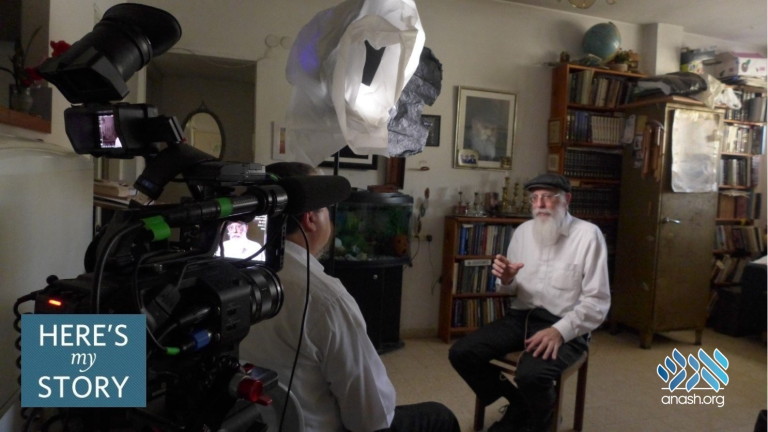 I grew up in a typical Jewish-American family — we were not completely Torah observant, but we were traditional. Although I attended a Jewish after-school program, I had no interest in Judaism whatsoever, and right after my Bar Mitzvah, I breathed a sigh of relief that I wouldn’t have to deal with it anymore.

My older brother Reuvain, who became religious while in college, tried to influence me, but my ears were closed. At that time I thought of Judaism as superficial and overly focused on social networking, and I was not interested in listening to anything he had to say. But when I was about to enter college — and the Vietnam War draft was hanging over my head — I started to ask questions about the meaning of life, looking to religion for answers. That is when I recalled the one thing of Judaism that still remained with me — the Shema prayer, which declares the unity of G-d — and I turned to my brother who provided me with profound, thought provoking answers to my questions.

Reuvain, who had joined Chabad in Crown Heights, influenced me to enroll in Hadar Hatorah, the Chabad yeshivah for searchers like me, so that I could see if I wanted to become religious.

When I first entered yeshivah in 1971, I was eighteen. And a few months later, for my nineteenth birthday, I merited to have a private audience with the Rebbe, as was the custom in those days.

In advance of the audience, I wrote a letter with my questions and requests and, among them, I asked the Rebbe to help me fix what I described as “my black past.” I wanted to elevate myself, to advance spiritually, and so I felt I needed a way of repairing my past behavior.

The Rebbe’s answer to this request was very interesting. As best as I can recall, he said, “If you are such an egoist, you should use this trait as a lever against itself. For example, if you see someone learning better than you, you should say to yourself, ‘I can certainly learn better than that,’ and then go and do it.” He went on to explain that when my yetzer hara, my evil inclination, realizes that I am using my ego for good instead of bad, it will leave me alone.

As he was speaking to me, I felt as if there was no one else in the universe —nothing existed in the world except the Rebbe and me. And I felt that he was hitting a bull’s eye in his reading of me and my issues.

He was speaking from the heart, and his message found its mark. I said to myself, “You have to shape up.” I knew by then that the way of Chabad was humility, subjugating one’s self to the divine will. So if I was an egoist, full of conceit and pride, I had to do something about it. From that day forward, I tried to work on myself and have done so ever since. But it took some years for me to process the Rebbe’s teachings. The Talmud says that sometimes it takes forty years to grasp the lessons of one’s teacher, and so it was with me.

Forty years after that first audience, it occurred to me what the Rebbe was trying to get across to me so early on in my religious studies when I was still young and not even sure that I wanted to stay in yeshivah. I think he was teaching me a lesson for life. He was saying, “You have to realize that G-d is good, and everything comes from G-d, therefore everything you experience during your life — even things that appear negative and even your own undesirable character traits — are not negative at all, they are all opportunities. Everything can be used as a lever to help you reach the highest good.”

After a number of years learning in yeshivah, I wanted so much to share this life-changing view of G-d, Torah and the world, yet I didn’t seem to be able to get it across. People I spoke with reacted as if this was foreign to them; they wouldn’t even consider it.

During a subsequent private audience, I asked the Rebbe for a blessing to be better at outreach and also for his advice on how to answer people’s questions in a way that would remove their doubts and help them come close to G-d and His Torah with joy.

In response, the Rebbe said, “After any change in life you have to be patient with yourself, especially after such a big change as becoming religious.”

Keep in mind, this was after several years of full- time yeshivah learning, and still the Rebbe said I needed to be patient.

He then cited the example of the great 11th century Torah commentator Rashi saying, “In his commentary, Rashi sometimes writes, ‘I don’t know what this means.’”

“Why does Rashi write this?” the Rebbe asked, and then he provided the answer: “He doesn’t need to show us how humble he is; rather, everything Rashi writes is a lesson for us. And from this we learn that, if we don’t know the answer, sometimes it is enough to simply say, ‘I don’t know.’”

He thus communicated to me that whatever might be my personal state, if it is truth that I am offering to others, then a humble and candid manner will go much further.

Mr. Aba Brenenson resides in Kfar Chabad, Israel, where he has worked as a Torah scribe for the past thirty-five years before retiring in 2015. He was interviewed in his home in October of 2018.