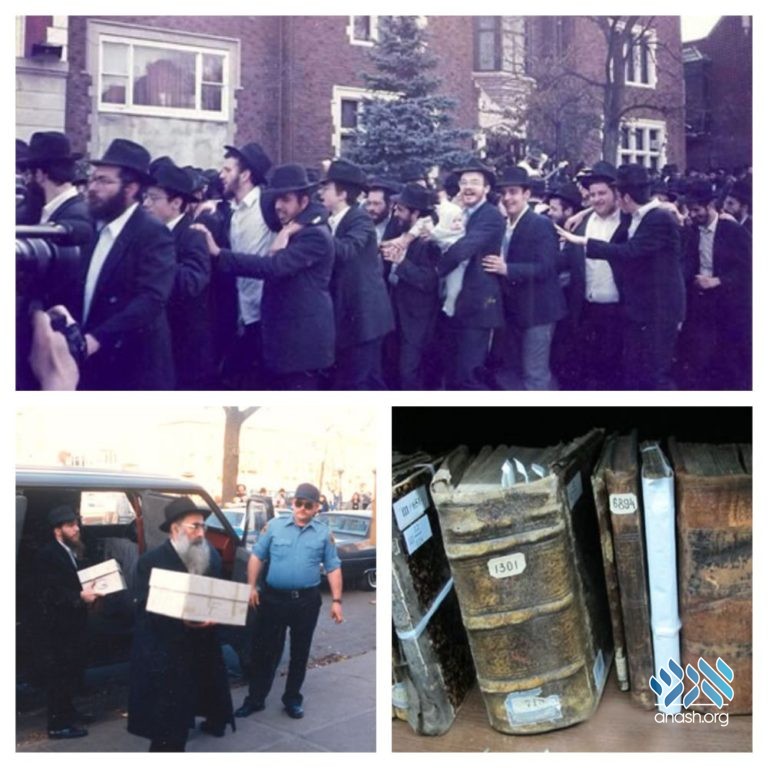 In Shvat of 5745 (1985), librarians of the Agudas Chassidei Chabad Library began to notice that rare books and manuscripts were going missing from the library. At around the same time, collectors and sellers of rare books began reporting suspicious items suddenly being placed on the market.

At the farbrengen on Yud Beis Tammuz that year, the Rebbe revealed the unfortunate chain of events to the chassidim. Over the next month, he spoke about it several more times, each time with great intensity and anguish.

After several failed attempts to summon Gurary to a din Torah, Agudas Chassidei Chabad filed a restraining order against the sale of any of the books from its library. They then filed a lawsuit, and the case was set to be brought before Judge Charles Sifton at the U.S. Federal Court Eastern District.

While preparing for the legal battle ahead, the librarians put together a collection of over 10,000 letters of the Frierdiker Rebbe, pointing toward Aguch as the rightful owners of this library. The Rebbe met with the legal team that was handling the case, and directed them to the most important ones.

In Kislev of 5746, the trial began; it lasted for 23 days. During this time, the Rebbe spoke about it at farbrengens, urging the chassidim that though Gurary’s claims that Lubavitch is no longer active are obviously false, they must respond by increasing their efforts in spreading chassidus. During these farbrengens, the Rebbe compared the current situation to the kitrug against the Alter Rebbe at the time of his imprisonment.

On Hei Teves 5747 (January 6, 1987), almost a full year after the trial ended, the judge issued his ruling that the books belong to Agudas Chassidei Chabad. As the news that “Didan notzach- victory is ours” spread among the chassidim, the joy was palpable. The intense celebration that followed lasted for days. The chassidim understood that this was about more than the seforim themselves. The judge’s ruling made a statement to the world about the nature of a Rebbe and the vitality of Lubavitch.

The other side filed an appeal, which was overruled on Chof Hei Cheshvan 5748; 2 days later, the judge ordered that the seforim be returned to Aguch. On Beis Kislev, they were brought back to 770.

After a final attempt by Gurary to appeal the court’s decision, the case was completely dismissed on Yud-Tes Teves 5750 (1990). Just before Rosh Hashanah that year, the final seforim that had been taken were returned.

For a collection of articles, videos, sichos and more related to Hei Teves, visit Vaad Or Vchom Hahiskashrus’s website dedicated to this special day.

For an audio timeline of the events leading up to Hei Teves produced by JEM, click here.