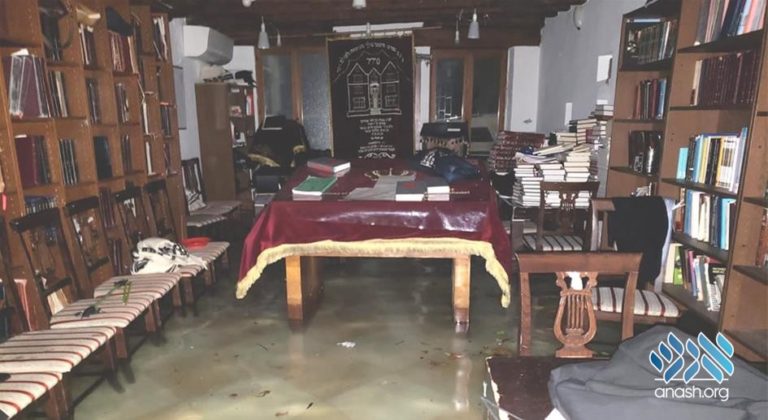 In the face of the worst flooding in Venice since the mid-1960s, which has resulted in two deaths and hundreds of millions of dollars in damage, the city’s longtime Chabad-Lubavitch emissaries struggled to save their own facility while reaching out to help residents and visitors overcome the catastrophic conditions.

“Chabad of Venice” is completely flooded,” wrote Mrs. Shachar Banin, co-director of the Chabad center with her husband, Rabbi Ramy Banin. A video on social media showed water gushing through an open doorway of the center’s shul, where nearly a foot of water covered the floor up to the aron kodesh, as an individual struggled to seal the door shut. The Banins, who have served the community for nearly three decades, were doing their best to reach out to community members in a city where even on normal days the only means of transportation is by boat, but “it’s not an easy day to communicate,” the rabbi messaged.

Amid heavy rains beginning late Tuesday night, floodwaters in the historic Italian city exceeded 6 feet, or 74 inches, representing the second-highest water levels since records began in 1923, just short of the 76 inches measured in 1966. A second deluge inundated the city on Wednesday morning as residents could be seen wading through knee-deep waters inside and outside historic sites, as well as around their homes.

On the island of Pellestrina—a strip of land that separates the lagoon that Venice sits on from the Adriatic Sea—two people died as a result of the flooding. One was electrocuted while trying to start a pump in his home, and another was found dead elsewhere on the island. At the height of high tide, officials reported more than 80 percent of the city under water.

Italy’s Prime Minister Giuseppe Conte declared a state of emergency on Thursday, following a similar action taken by the mayor of Venice, Luigi Brugnaro, describing the flooding as “a blow to the heart of the country.”

“It hurts to see the city so damaged … its commercial activities on its knees,” he said. Brugnaro predicted that the damage would run into the “hundreds of millions of euros.”

The city of Venice is made up of more than 100 islands inside a lagoon off the northeast coast of the country, making it vulnerable to yearly flooding and periodic serious damage.

Established by Doge Leonardo Loredan in 1516 – the Ghetto of Venice – where Jews were compelled to live under the Venetian Republic—was one of the world’s first places where people were forcibly segregated because of their religion. The English word “ghetto” is derived from the Jewish Ghetto in Venice, originating from the Venetian word ghèto and the Italian word ghetto.

Today, the city is home to between 450 and 500 Jews, down from 5,000 residents at its height in the 17th century, though hosts thousands of Jewish tourists who visit each year. The community boasts four other synagogues and the Banins’ thriving Chabad center, situated within the ghetto. They and another emissary, Rabbi Amichay Rieber, run a yeshivah, restaurant and tourist center, and host weekly Shabbos meals, offer kosher takeout food and provide a wealth of educational information for residents and tourists.