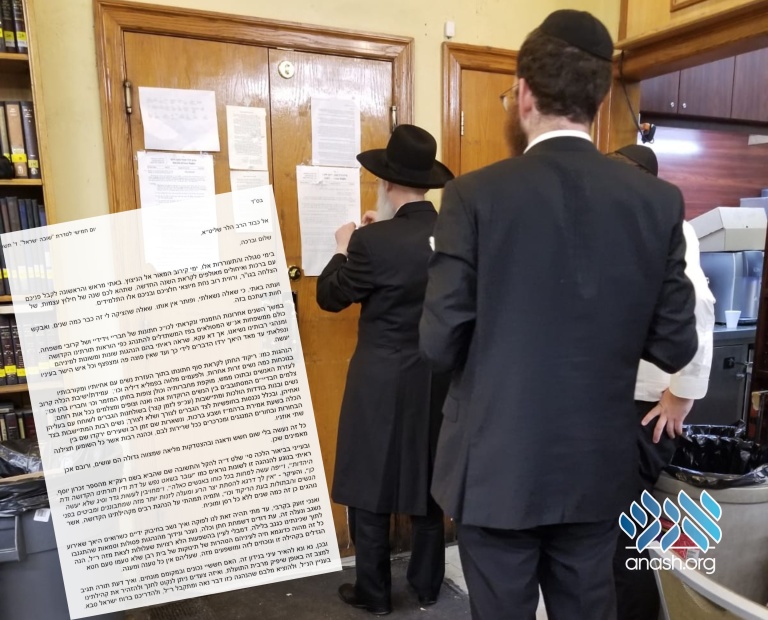 Last week, there was some commotion in the central Kollel in Crown Heights when Rabbi Yosef Heller, Rosh Kollel, posted a heartfelt letter on the wall.

The letter was not his own, rather a private letter he received asking him to weigh in on tznius related issues that are popping up at recent chasunos among anash. We share a picture of the original Hebrew letter, as well as a partial free English translation by our staff. We thank the reader who sent it in.

“…I have a question which has been bothering me for a number of years and I cannot find an answer. I would like to ask your opinion on it. During the past few years, I have been invited to many chasunos of friends and relatives of mine, who are upstanding members of anash.

“These are people who endeavor to follow our Torah and the instructions of our Rebbeim. However I have noticed various questionable behaviors at these chasunos which leave me wondering how we have fallen so low. We have reached the point where no one speaks out in protest, and everyone does as they see fit.

“Here are some of the behaviors:

* Towards the ending of the chasunah the choson enters into the women’s section and dances with his sisters and relatives, in the presence of many other unrelated women. Sometimes the choson is accompanied by other men as well.

* At some chasunos, the Kallah comes to sit near the men’s side surrounded by her friends, while the choson and his friends are nearby, singing.

* On occasion, solitary women enter the men’s side to sit and chat with their husbands and brothers.

* Many women join the Kallah during birchas hamazon and sheva brachos on the men’s side and stay around long after, while singing and dancing continue.

“…My heart cries out; how long will we sit with folded arms looking on, as an event so special and holy as simchas choson vekallah is dampened by such behaviors that have crept into our midst?

“This has become sample behavior for our young pure children, who know nothing better and cannot be blamed for later following suit.”