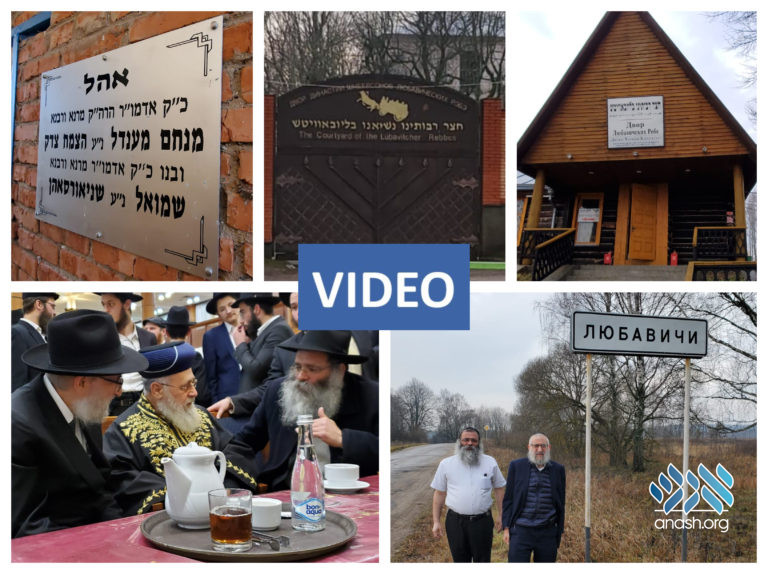 In Russia for the Lazar-Wilansky wedding, Rabbi Don Yoel Levy and Rabbi Kalman Weinfeld of OK Kosher took the opportunity to travel to the town of Lubavitch, capital of Chabad Chassidus for close to 100 years. They also met with the Chief Rabbi of Israel and discussed the operations at OK Kosher.

On the way to Lubavitch, they stopped in Smolensk to visit the Chabad house of Rabbi Levi Yitzchak Mondshein. In the pictures below, one can see Rabbis Levy and Weinfeld standing by the gate in that city, that the Alter Rebbe passed through when escaping from Napoleon.

After a short stop, they continued on to Lubavitch where they toured the chotzer of the Rebbeim, the former site of Yeshivas Tomchei Tmimim, and ‘Beis Schneerson’, the house that was purchased for the Rebbe in Lubavitch.

They then continued on to the Ohel of the Tzemach Tzedek and Rebbe Maharash. Next to the Ohel, one can see the newly built shul, a reconstruction of the shul that had been near the Ohel before World War II. It is interesting to note that the custom of davening near the Ohel of a Rebbe, especially on Shabbos and Yom Tov, is not a recent innovation, but rather one that had happened by the Alter Rebbe’s Ohel in Haditch and in Lubavitch as well.

Rabbis Levy and Weinfeld were very impressed by the hachnosas orchim of Lubavitch run by Rabbi Gavriel Gordon, who also manages the holy sites and is curerently working on restoring the enitre Lubavitch cemetery and rebuilding the chotzer.

The Chief Rabbi listened fascinated to Rabbi Levy who described the OK Kosher hashgacha carried out by the hundreds of mashgichim and rabbis scattered throughout the world. The ‘Rishon Letzion’ expressed hope for more meetings in order to learn more about the successful system.

Rabbi Yosef also expressed his admiration for Rabbi Weinfeld’s description of the existing system that exists in restaurants, catering and hotels, which are strict about chalav yisroel, chassidishe shechita and in certain communities, also bishul yisroel according to the Beis Yosef.