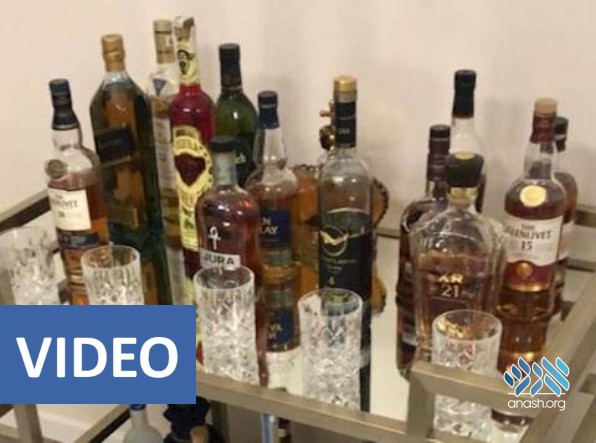 An Argentine Jew in his 30s poured out $4,000 worth of alcohol in his kitchen sink on Chol Hamoed Pesach. Shliach to Puerto Madero, Argentina, Rabbi Chaim Oirechman, told the story behind the incident.

A Jew in his 30s who lives in the exclusive waterfront neighborhood of Puerto Madero neighborhood in Buenos Aires poured out $4,000 worth of alcohol in his kitchen sink on Chol Hamoed Pesach.

During a recent zoom achdus farbrengen with former classmates, Shliach to Puerto Madero Argentina Rabbi Chaim Oirechman, told the story behind the incident.

“This young man was once a regular at our Chabad House, but in the last year, he withdrew a bit from participating in davening and shiurim. At first, I didn’t understand why, but later people in the community told me that he was dating a non-Jew. But I still kept up my connection with him and before Pesach, I gave him shmura matza like every year.”

“On Chol Hamoed, he called me and told me that Baruch Hashem he left his non-Jewish girlfriend and returned home. In my heart, I was sure that eating the matza – “מאכלא דמהימנותא” gave him the emunah and koach to take that step. He told me that the reason he’s calling me is that when returned home, he realized his liquor cart full of alcoholic drinks is chometz and he wanted to know what he had to do. The alcohol was worth a considerable amount of money.”

“Every year I bring him the mechiras chometz form to sign but this year due to the coronavirus lockdown, I sent the form to everyone online. I asked him: ‘You didn’t sell your chometz through the link I sent you?’ He answered no. I asked him why and he said that since he was still living at his girlfriend’s house where anyway there was chometz, he didn’t think he had to sell his chometz. I told him gently that if so I think there’s a problem, but I understand that it’s a lot of money and I’ll check on the matter and get back to him.”

“We tried to find heterim. He suggested perhaps leaving the alcohol outside the house and if someone doesn’t take it he could take back after Pesach. But I explained that according to halacha, once Pesach begins he cannot give it up, but he needs to destroy. I told him that I understand it’s a big nisayon for him, but Hashem will reward him in return. I didn’t specify how he needs to get rid of it and he  poured it down his sink.”

After pouring all the alcohol down the drain, the Jew told the Rabbi Oirechman what gave him the strength to do it. “You should know that what gave me the strength to do this is that you continued to keep in touch with me when I was with my non-Jewish girlfriend and you didn’t get angry at me or give up on me. I felt your unconditional love.”