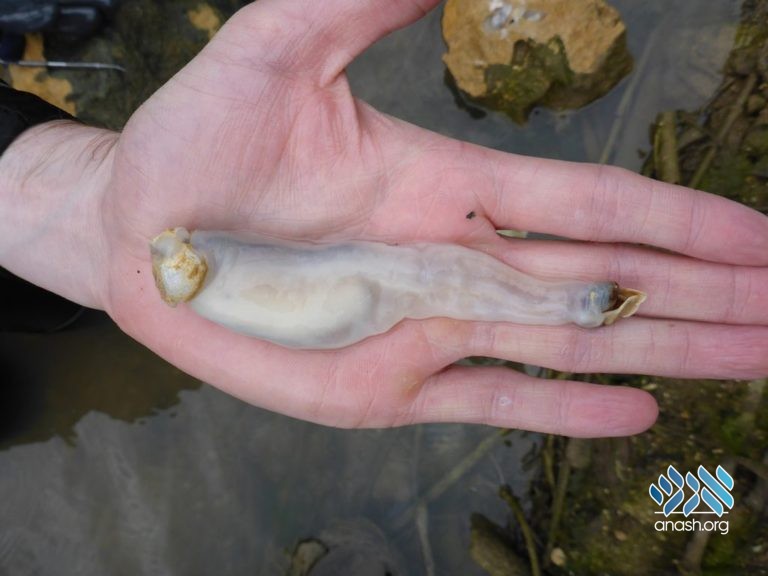 News that researchers had discovered a type of shipworm that has the remarkable ability to cut into rock has inevitably raised the question among some whether this creature — formally named Lithoredo abatanica — is none other than the long-lost shamir, a creature that was used in the Mishkan and the Beis Hamikdash.

When I was first alerted to the media reports of this scientific discovery, my immediate reaction was to reject the idea outright.

After all, the Mishnah in Sotah (9:12) clearly states that when the Beis Hamikdash was destroyed, the shamir ceased to exist. In that case, until the third Beis Hamikdash will be rebuilt — may it be speedily in our days — the shamir could not possibly be found.

However, I subsequently came across mention of a Ritva (on Maseches Avodah Zarah 24b) that gives two explanations of this Mishnah: Either that it refers to the destruction of the Beis Hamikdash, and the shamir ceased to exist entirely, or that the word “ceased” is a relative term and that, with great effort, the shamir can be found even after the destruction of the Beis Hamikdash.

Since the second approach leaves open the door for the shamir to be rediscovered, I decided to reach out to the scientist who found this fascinating creature to see whether his findings are compatible with the shamir of Chazal. But first, it was necessary to establish a set of criteria of what the shamir is.

The Gemara in Gittin (68a) describes how when Shlomo Hamelech readied to build the stone walls of the Beis Hamkdash, in which neither hammers nor axes nor any metal tool were to be used, he asked the Rabbanan of his generation how this could be accomplished.

They advised him to use the shamir, a creature that was last used by Moshe Rabbeinu to inscribe the names of the Shevatim on the avnei hachoshen worn by the Kohen Gadol.

In order to find out the whereabouts of this creature, Shlomo Hamelech captured Ashmedai, the king of the demons.

Ashmedai revealed to him that the shamir was given by the Sar of the yamim (the angel of the seas) to the duchufis, the wild cock, whom the angel trusted to keep his oath and return it.

The wild cock used it for sustenance — he carried it to mountains that lack vegetation and placed it on the peak of the mountain — whereupon the mountain split open. The cock collected seeds from trees, tossed them into the crevices and, over time, it became lush with vegetation, creating food sources for the wild cock.

The Maharsha explains that the shamir was a sea creature, which is why the Sar of the seas was the one who entrusted it to the wild cock, and the purpose of the oath was to ensure that the shamir doesn’t fall into the hands of humans, who may use it for destructive purposes.

We learn more about the shamir from a Braisa taught by the Gemara in Sotah (48b) which teaches us that the reason the shamir was used for inscribing the names of the Shevatim on the avnei hachoshen was that the Torah (Shemos28:20) says of these stones, “b’miluosam” — that they were to be used “in their entirety.”

Since a cutting tool would inevitably chip away some of the stone, and it would no longer be “in their entirety,” using such an instrument was not an option.

Instead, the names of the Shevatim were written with ink on the stones, and the shamir, which the Braisa says was the size of a barleycorn, was shown to them from the outside and they split by themselves.

The Braisa goes on to compare it to a fig that splits in the summertime, and the valley floor that cracks in the winter. In both cases, nothing is missing of its mass. The Gemara also relates that it was necessary to keep it in a hollow lead pipe filled with rags and barley bran, presumably so it wouldn’t split everything in its path.

From the wording of the Braisa, it would appear that the shamir didn’t even touch the stones. From the Tosefta (Sotah15), it appears that the shamir was placed on top of the stones, causing the stone to split. However, according to all opinions, it didn’t enter the actual stone. So it would seem from these teachings of Chazal that the shamir has the following characteristics:

It is a sea creature, but can survive outside the water as well.

It splits rocks and glass, as well as any hard surface, including mountains.

It does not enter the rock, but remains on the outside.

It does so without taking anything away from the mass.

It is extremely powerful and can be misused by humans.

It is the size of a barleycorn.

Unsurprisingly, when I contacted Dr. Reuben Shipway of Northeastern University in Massachusetts, one of the scientists who discovered the rock-cutting shipworm in the Abatan River on the Philippine Island of Bohol, he had never heard of the shamir. But Dr. Shipway, an affable professional with a marked British accent, was happy to be of assistance and went out of his way to provide me with material and introduce me to his colleagues.

His only request was that we stress that this research behind the discovery was a collaborative effort and part of a larger project under the Philippine Mollusk Symbiont (PMS) International Collaborative Biodiversity Group (ICBG). He was quick to point out that Prof. Daniel Distel, a coauthor of the scientific paper about the discovery, and Prof. Margo Haygood and Prof. Gisela Concepcion are the Principal Investigators on the PMS ICBG project and that Dr. Gary Rosenberg, another coauthor, was the lead malacologist on the project.

(The full list of collaborators on this project are the Ocean Genome Legacy at Northeastern University, the Philadelphia Academy of Natural Sciences, the University of Utah and the Marine Science Institute at the University of the Philippines.)

Dr. Shipway and the others were first alerted to the existence of an unknown shipworm in this river by the efforts of an expedition by the Museum d’Histoire Naturele in Paris, led by Philippe Bouchet.

As Dr. Shipway pointed out, while this creature was unknown in the scientific community, its existence was quite well known to the local residents of this island, who were essential in helping them find these creatures, which they refer to as the “antingaw.”

He recalled that when the team discovered this creature, they knew they had “found something special and important to science.”

He added, “This finding really highlights that there are still many amazing and surprising biodiversity discoveries left in the world.”

“Can the Lithoredo bore through glass?” I asked.

“It is unlikely that Lithoredo would ever encounter glass in its natural habitat,” Dr. Shipway replied.

“Can it bore through a very hard rock?” I pressed.

“The bedrock in the Abatan River was a soft sandstone. At present, we do not know if Lithoredo can bore through harder rocks.”

However, he was able to confirm that Lithoredo is able to survive out of water. That still left the investigation inconclusive.

Then I posed what might be called the litmus test.

“Can it split a rock without taking away from its mass?” I asked him.

“Shipworms ingest the material they burrow into,” Dr. Shipway explained. “We found rock in the intestine of Lithoredo.”

He also confirmed to me that during his observation of these creatures in their natural habitat, he saw that they literally ingest rock and then expel fine sand.

When asked whether the creatures tried to pierce the skin of the humans who handled them, Dr. Shipway said that “outside of the rock they were docile.” I also asked about the size of the worms he encountered. He told me that they varied in length, but some were several inches long — far larger than the tiny barley corn mentioned in Chazal.

In conclusion: the Lithoredo worm is an amazing creature. However, it is not the shamir of Chazal.

While it is clear that it is not the long-lost shamir, the discovery of the Lithoredo is yet another incredible example of nifleos haBorei — the majestic wonders of Hashem’s creation.

The fact that it caused some of us to delve into the discussions in Chazaland the Rishonim about the shamir is also a most positive sign.

My colleague and good friend, the noted wordsmith Mordechai Schiller, was one of the first to alert me about this discovery. After I wrote to him stating that I didn’t think this could possibly be the shamir, his reply — as always — was right on target:

Click here to read more about the Shamir worm.