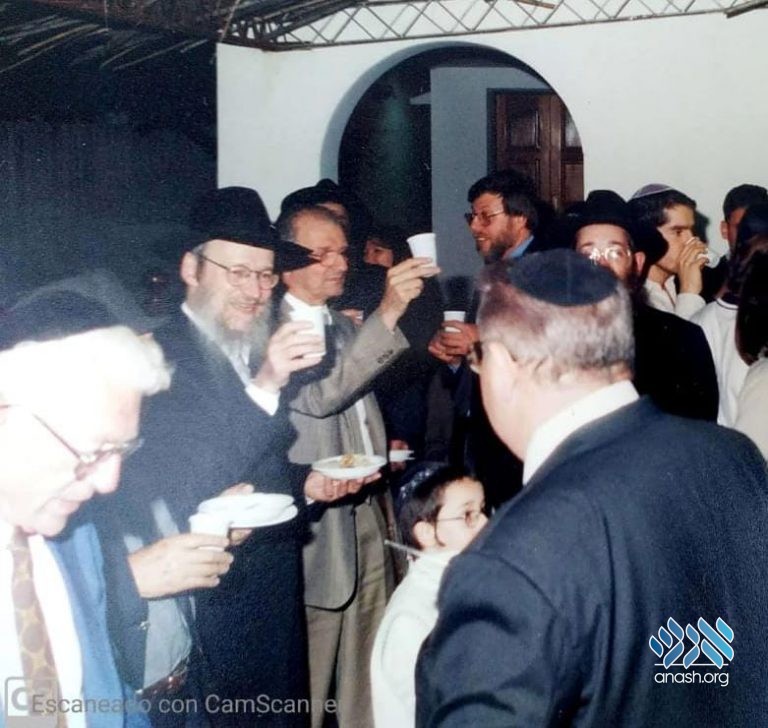 “Much has been said about my shver Rabbi Schwei in the capacity of a rov, a melamed, and an ish chesed. But let me fill you in on another chapter of his life, one that is not so known- Rabbi Schwei on shlichus.“

By Rabbi Yossi Turk, Director of Chabad in Cordoba, Argentina

Much has been said about my shver Rabbi Schwei in the capacity of a rov, a melamed, and an ish chesed. But let me fill you in on another chapter of his life, one that is not so known- Rabbi Schwei on shlichus.

For 7 consecutive years, until he became a member of the Beis Din, he would come together with his rebbetzin לאויוש”ט to spend the month of Tishrei with us: his daughter, son-in-law and einiklich, in Cordoba, Argentina.

Besides the family time spent with us and our children, the impression he made on our community is everlasting. Let me share some memories with you.

Rabbi Schwei was the baal tefila and baal korah for the yomim noroim. The heartwarming sincerity and depth of his tefilos are engraved in the memories of the mispalelim. But the Haftoras Chana from Rosh Hashonoh was beyond description. When he would read the words about how Chana poured her heart out to Hashem, he would cry along as if he was actually there in the mishkon! Even though many locals didn’t understand the words, the tears and emotion had a profound impact, causing many to shed a tear too, and awaken a hirhur tshuva.

I recall how he actively helped people with their chickens at kapores, or getting together the minyan for hatoras nedorim. He was totally given over to the people, giving advice, teaching, and lifting up the Yom tov spirits.

The atmosphere in the succah with the crowds of guests was memorable. He would teach songs, tell chassidisher stories, and inspire. The classic was “a succah’le a kleiner, mit bretelech gemeine, hob ich kam mit tzores gemacht….” With this, he would tell the story of how as a young boy in Lvov, on the way out of Russia, they built a low succah, the height of the wall around the balcony, so as not to be detected from the outside. What mesiras nefesh to do mitzvos! He would tell over the vort that the 3 plus walls of the succah reflect Hashems’s embrace and love for every yid. The crowd would drink in every word, and even though they may have heard it the previous year, they didn’t tire from hearing it again, year after year.

During chol hamoed, we would go on mivtzah lulov together for hours at the local Jewish school, where he would talk to the kids in his loving manner and soft voice, as I would translate. It’s impossible to calculate the long-term effect of those classes.

Simchas Torah was the climax. The simcha with which he danced, and the life with which he energized the hakofos, continues with us till today. As one of our balebatim told me this week: He was then a young, searching student trying to discover his path, and during the dancing Rabbi Schwei told him, “Hold the Sefer Torah shtark!” These words are engraved in his memory. This past simchas Torah, while dancing with his own son, he repeated the same words to him: “Hold the Sefer Torah shtark!”

After joining the beis din, his responsibilities to the Crown Heights community prevented him from continuing his visits, but he made a point of asking me to transmit his brochos yearly on Erev Yom Kippur to our/his beloved community in Cordoba.

He is unforgettable here.

Families in our community relied on Rabbi Shwei to provide for their basic needs. Now, these families are now left with no other means of support.

Please open your heart and give generously, and may the z’chus bring generous and abundant brachos in your life.