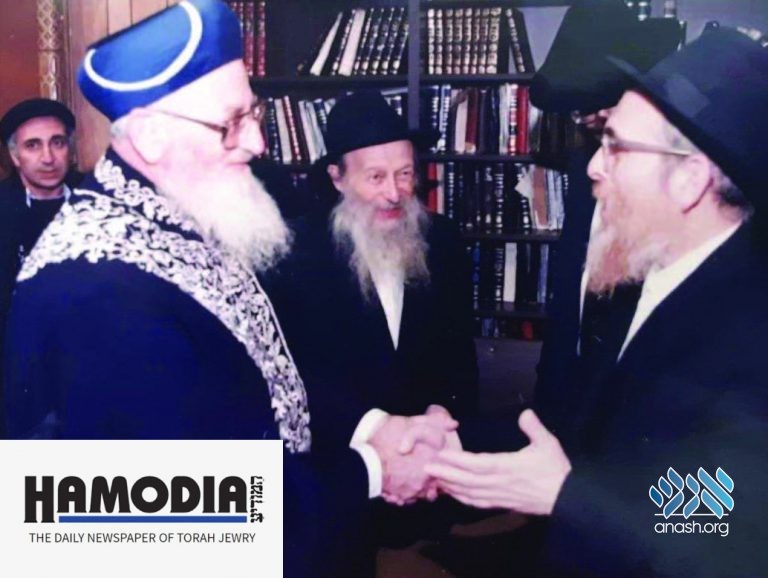 In the tribute, Rabbi Jacobson remembers Reb Yisroel’s boundless love for Torah, his caring for each of his students, and how Reb Yisroel lived in a ‘completely different world.’

Read the full article below:

Reb Yisrael Friedman was one of my Roshei Yeshivah, back in the early 90s when I studied in the Yeshivah Oholei Torah, in Brooklyn, NY.

How do I describe him? Torah was oxygen for him. Not seldom would he come to yeshivah and share with us how he was up much of the night trying to decipher the sacred words of the Rashba on the sugya, the nuanced expression of the Ramban or the Ran. Ah! How he would sit with us for hours to demonstrate the precision in every word of Rashi on the Gemara,

But there was something else I observed in his delight during learning Torah. The Baal Hatanya in hundreds of his discourses describes how Torahstudy embodies the ultimate intimacy between a Jew and Hashem. Torah, he explains, was the peak of a Jew’s life, an opportunity to melt away in the Oneness of Hashem that pervades all reality. Far beyond the intellectual brilliance and pleasure of learning, it affords one the gift of oneness with infinity and ultimate truth.

When I studied with Reb Yisrael, I felt he was an embodiment of this type of ecstasy in the study of Torah.

It is hard to describe the bitul, the awe and reverence, that he expressed before a question of Tosafos, aline of a Rishon, an expression of Chazal. He would tell us that each word is Elokus, pure G-dliness. So we should not be surprised if we don’t grasp it — how can a human brain grasp infinity? The novelty is when we do manage to understand something of Torah, when infinity does make its way into our finite intellects.

A number of years ago, I was walking on Kinston Avenue in Brooklyn, and I met him on a street corner. Immediately, he wanted to know if I am still learning seriously or “just giving speeches.” For an hour and a half, on a bustling street corner, he explained to me a Ran in Pesachim, a Reb Chaim in Hilchos Terumos, a phrase in Shulchan Aruch HaRav Hilchos Pesach. He then shared with me the content of a speech he had heard on Shavuos of 1947, in Paris, when he was 11 years old, from a senior Rabbi who had escaped Russia, Reb Avraham Elye Plotkin, on the theme of mukizeh.

When I came home, I opened a recently published manuscript of Rav Plotkin, and I saw the entire speech there.

One summer I met him in the street again. I told him that I had been at a beautiful resort site in the Catskills mountains. I described how on Sunday, everyone goes out to the porch, makes a barbecue, and consumes lots of meat and beer.

When he heard my description, he gaped at me as though I was describing people eating glass for pleasure. Then he replied with empathy: “Ah rach- manus oif zei, poor souls…”

He told me, “Nobody ever explained to them in a real way the spiritual oneness of the universe, and their own infinite connection with all of it. So they need to resort to externalities to satisfy their voids.”

His compassionate reaction made me realize that, indeed, he was completely in another world. He was not angry or judgmental, just surprised and startled. When a person attacks angrily or aggressively it is often because he himself is triggered by the temptation; he is angry not at those people but at himself. But his reaction indicated that in his world, material indulgence was simply foreign.

I then understood why the most refined souls are always the least judgmental. They have no axe to grind in their own psyches. Their focus is on what G-d wants from them at this moment, not their anger with their own repressed skeletons.

The Rosh Yeshivah once spoke to me about the principle in Zohar and Tanya, moach shalit al halev, how our minds must rule over our hearts. He shared a story that he had heard from Rabbi Yisrael Jacobson:

The sixth Lubavitcher Rebbe, the Rebbe Rayatz, zy’a (1880-1950), smoked regularly, as was very common during the early 20th century. When the Rebbe arrived in the United States in March 1940, a prominent medical professor and doctor came to see the Rebbe in order to convince him to minimize his smoking. The doctor explained to the Rebbe the recent medical research on the hazards of smoking.

As the professor was talking, he took out a pack of cigarettes, took one for himself and then — in a social gesture typical of the time — offered one to the Rebbe.

The Rebbe replied, “I don’t smoke.”

The doctor gaped at the Rebbe, and then at the full ashtray. “What do you mean?” he asked the Rebbe. “Of course you are a smoker!”

The Rebbe explained: “I used to be a smoker. But not any longer. As soon as I was given to understand that cigarettes are a hazard to health, I became a non-smoker.”

With this Reb Yisrael explained to me the meaning of self-control; of allowing your values and priorities to govern your life.

Reb Yisrael was very witty and sharp, but those who knew him well realized that inside, he was loving, soft, warm and very sensitive. When he noticed a student struggling with his learning, he would simply sit down across from him and learn with the talmid b’chavrusa.

Reb Yisrael Friedman and his eishes chayil, Rebbetzin Chana Luba, ah, were not blessed with biological children, but they were blessed with their adopted daughter, Miss Rochel Friedman, who was a loving and devoted daughter to them.

He had no sons, yet he had a fatherly love for his students. When he saw a bachur whose shoes were torn, he would give him money and tell him to buy new shoes.

He once shared the following story about the legendary Rav of Dokshitz, Poland, Reb Leib Shainin who was murdered by the Germans while wrapped in tallis and tefillin.

Reb Leib would each year repeat the same insight in his Shabbos Hagadol sermon. The opening Mishnah in Pesachim states that “in a place where you do not bring in chametz, you need not do bedikas chametz.”

Reb Leib explained this law homiletically: If you did not feed a person the entire year, if you did not bring him any bread to eat, then you do not have the right to suddenly come and start scrutinizing him and checking for all the chametz inside of him. Only when you love someone sincerely, and you are there for them in all their needs, are you entitled to come help them clean out their inner chameitz.

That is how the Rosh Yeshivah lived. He could not tolerate a Torah that was divorced from ethical refinement, ahavas Yisrael, and deep caring for another person. Reb Yisrael shunned vanity. His life of 84 years was one long voyage of avodas Hashem. His yiras Shamayim was of a different caliber: the presence of Hashem was real at every moment.

One former student recalled that when he was first enrolled in Oholei Torah, one of his uncles commented that it would be worth studying at the institution “if only to watch Reb Yisrael daven Minchah.”

Reb Yisrael was born in the Belarusian city of Beshenkovitz, then part of the Soviet Union, in 1936, to Reb Yaakov and Rebbetzin Gittel Friedman, prominent members of the Boyan Chassidic community.

His father was killed on the Russian front, fighting the Germans. Gittel was left with three orphans. Escaping the Nazis, they fled to Samarkand, Uzbekistan, and ultimately, after the War, escaped the U.S.S.R. and arrived in Israel.

In 1956, Reb Yisrael came to New York to study near the Lubavitcher Rebbe, zt”l. In his first meeting with the Rebbe, he confided in the Rebbe regarding a number of issues that were bothering him.

The Rebbe replied: “Sit and learn and forget about everything else.”

This is exactly what he did for the rest of his life.

Reb Yisrael passed away on 7 Nisan 5780 after succumbing to coronavirus.

His boundless love of Torah and his extraordinary love of his thousands of students will remain etched in their hearts forever.