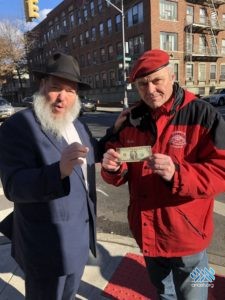 When activist Noochie Gross heard that Curtis Sliwa had lost his dollar from the Rebbe in a shooting, he knew how to thank this Guardian Angel.

28 years ago, members of the anti-crime group known as the ‘Guardian Angels’ went to 770 to see the Rebbe.

“The Rebbe, Menachem Mendel Schneerson, in honor of our service, gave each Guardian Angel a blessing and a Rebbe dollar,” said Curtis Sliwa, founder and CEO of the New York based non-profit.

The service Sliwa referred to is a 3 month long patrol of Crown Heights during which Sliwa and his team offered residents protection during the notorious riots of August 1991.

Following the recent rash of anti-semitic attacks in the New York area, the Guardian Angels have returned to once again offer their protection. During a meeting with community activist Rabbi Noochie Gross on Sunday, Sliwa mentioned that this cherished dollar, which he always kept close by, was lost several years later when he was shot in a New York Taxi.

Wanting to show appreciation for Sliwa’s service to the Crown Heights community, Rabbi Gross gave him the most precious gift of all: a dollar he himself had received from the Rebbe.

“We’re a visual deterrence in our red berets and our red satin jackets,” he said. “Nobody’s going to commit an attack when we’re around.”