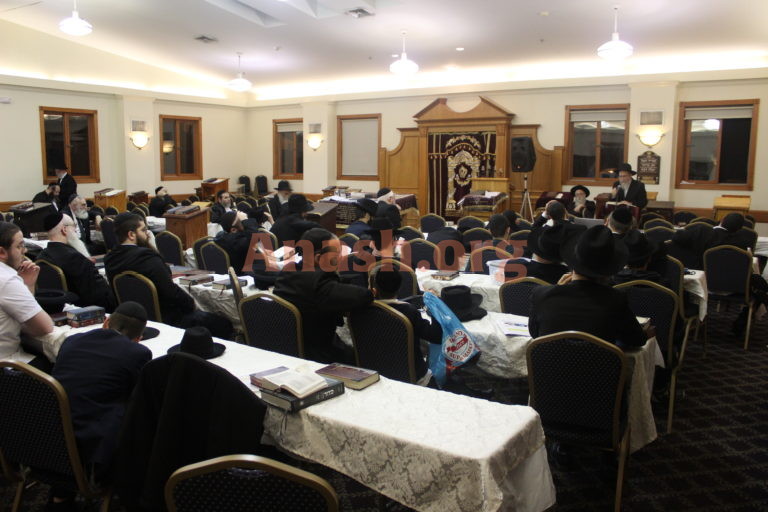 Residents and guests from the Greater Monsey area joined together this past Monday night for a kinus torah that has been taking place every one of the shalosh regolim for as long as anyone can remember. Over recent years several temimim have taken the initiative to increase the scope and try and bring exciting guest speakers to town. The kinus takes place at Monsey’s central Lubavitcher shul, K’hal Tzemach Tzedek, under the leadership of Rabbi Boruch D. Lesches.

Rabbi Boruch Dov Lesches, Mora D’Asra, opened the kinus by thanking the organizers for strengthening this inyan which is so dear to the Rebbe. He then went on to discuss the topic of eating matzoh on the days and in the meals other than the two sedorim. He discussed at length the minhag that the Baal Sdei Chemed found in his travels by some in Lithuania, apparently based on the Vilna Gaon, to make a brochoh “al achilas matzoh” every time they washed for matzoh on Yomtov.

Rabbi Lesches then went on to discuss the opinion of the Alter Rebbe – halochoh l’maaseh – that we do not make a brochoh other than at the seder. In addition the Rov discussed the Rebbe’s opinion that despite there being an inyan by chassidim of previous generations to refrain from matzoh other than when absolutely necessary – such as seudas Yomtov – for reasons of being stringent in matters of kashrus, that in our generations we eat as much matzoh as possible, due to the holiness of the matzoh.

Special guest Master educator Rabbi Yeshaye Weber of Yerushalayim spoke about Pesach being chag hachinuch and the importance of imparting the lessons and holiness of Pesach to our children. Using the ben chochom as the example of a person who wants to experience what his ancestors experienced when they left Mitzrayim, Rabbi Weber explained how we too can have our children have that same positive experience in Torah and Mitzvos.

Rabbi Chaim Dovid Kagan; Rov, Cong. Beis Menachem, spoke at length about the practical implications of going to places during chol hamoed that have chometz on the premises and the issues of having pleasure, such as smell, from that chometz. The many shittos of psik reisho, with comparisons from melachos of Shabbos, were explained and elucidated.

A big yasher koach to the tmimim GR and ER for arranging the speakers, as well as setting up the shul, etc.