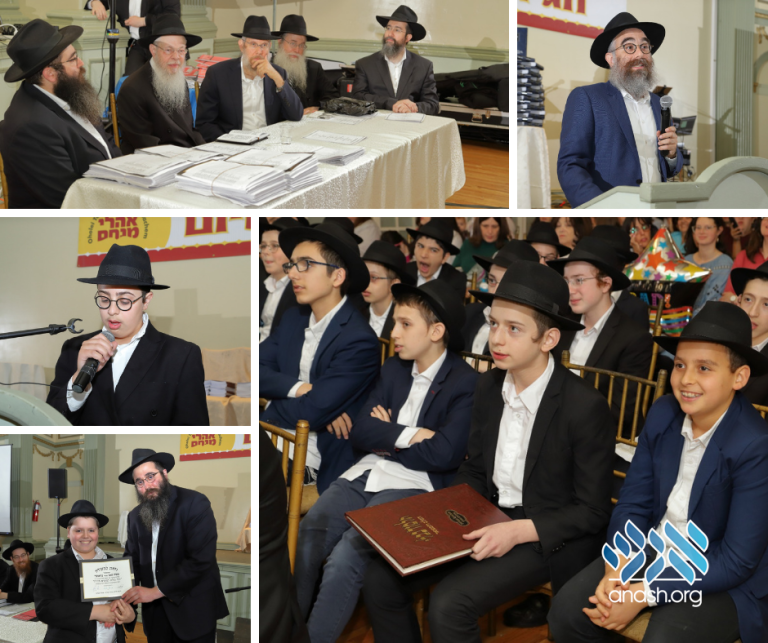 Oholei Torah celebrated its 8th grade graduation with talmidim, their families, melamdim and hanhala in attendance.

The program began with the talmidim being represented on stage by a few of their classmates. Yaakov Sasson led the recital of the Rebbe’s kapital Tehillim. Menachem Mendel Blenitzky made a siyum on the whole Maseches Makos, which was learned over the course of the year.

Feivel Brower, speaking on behalf of all the students, thanked the teachers for instilling in them chibas hatorah, bringing references from a sicha of the Frierdiker Rebbe.

Rabbi Mendy Zarchi, shliach to Puerto Rico, represented the parents in an address to the graduating class. He encouraged the talmidim to remember, as they move forward, that this is not the end, but the beginning of a new stage in which they will go higher in learning and all endeavors.

Rabbi Chaim Yisroel Wilhelm, menahel of the 8th grade, thanked the parents for the yiddishe chinuch they gave over to the boys, from the beginning. He thanked each teacher individually and gave a gift of appreciation from the yeshiva.

Recognition was given to the boys who come from out of town, leaving their homes at a young age to be able to participate in an environment of learning and ruchinusdik growth.

The program ended with each melamed presenting his students with their diplomas. Special thanks was given to Rabbi Bryski for all of his efforts in coordinating the graduation.