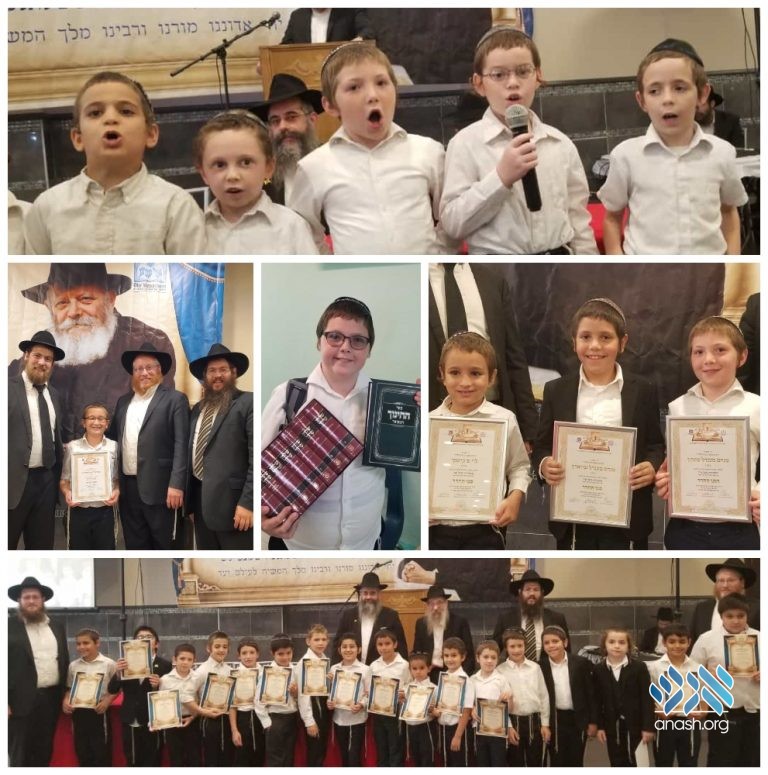 Fulfilling the Rebbe’s directive to continue classes into the summer, students at Cheder Ohr Menachem graduated this week, completing an additional month and a half of learning.

The Baal Shem Tov taught us that we can minimize the spirit and reality of “Av” through simcha shel mitzvah. The Rebbe thus launched a campaign urging every Jew to add in simcha of Torah by learning and completing masechtos, and every Lubavitch community celebrates siyumim in the evenings following maariv.

However, in Crown Heights, during the final days of bein hametzarim, the Rebbe received an extra special nachas. Fulfilling a heartfelt request the Rebbe made numerous times, Cheder Ohr Menachem continued learning into the summer, while enjoying special trips and activities in the late afternoons.

As a result, some 200 children completed an extra month and half of learning. Harav Yosef Yeshaya Braun commented that this is one unique siyum, with so much learning completed!

The graduation program began with emcee Rabbi Zalman Goldstein expanding on the unique experience the boys had, including how they proved themselves to continue learning with hasmada while at home, due to the pandemic.

Menahel Rabbi Menachem Mendel Yusewitz thanked all the melamdim for their incredible work. He then proceeded to applaud and present with the melamdim the certificates, and with a special shevach, teachers gave every student for their outstanding accomplishments.

Vice principal Rabbi Yossi Overlander then proceeded to give out Mishnayos Baal Peh certificates together with seforim prizes.

A highlight of the event was a beautiful video produced created by grades 4-7, depicting the pre-bayis rishon era in which soldiers dedicated to Dovid Hamelech toil not to be lured into those crowning Avshalom his son.

As the annual graduation came to a close, the dedicated staff and hanhala were surprised with special recognition for their efforts specifically in these trying times throughout Covid-19. Following a special MyMaor video of the Rebbe prepared in honor of this graduation, Maor’s founder and leader Rabbi Chanoch Chaskind presented a special recognition to the dedicated Hanhala members, on behalf of the parents. In addition to the above-mentioned members, he also mentioned those who work tirelessly behind the scenes to make it all happen: