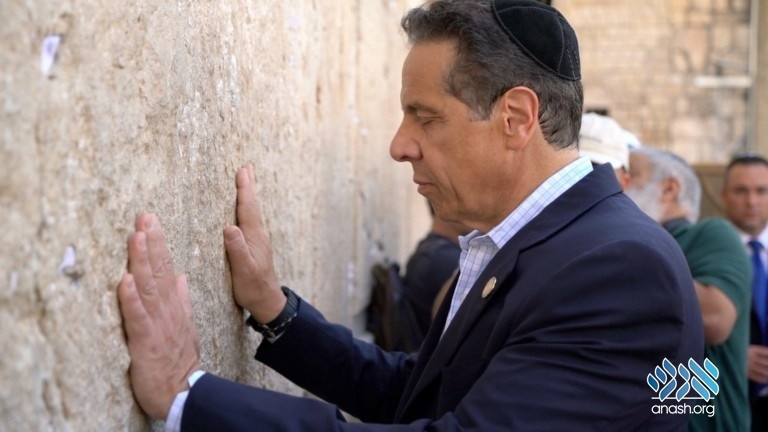 Governor of New York State Andrew Cuomo visited the Kosel on Friday morning. The governor, who is making his third trip to Israel, sees the purpose of the trip as to strengthen economic ties between the State of New York and Israel. Cuomo said he intends to speak to Israeli software developers to see if they would be interested in helping the Metropolitan Transportation Authority with its train navigation system.

During a previous trip to Israel, in response to questions about regional instability the governor said, “This is not about Israel versus Hamas. This is bigger than that.”

“This is extremism. This is ISIS and Hamas and Hezbollah. This is Syria and this is Iran, this is an expanding Middle East situation and this is a war against democracies,” he said. “Take a look at the big democracies, and you’ll see that you come up pretty soon.”

Cuomo was accompanied on his tour of the Kosel by Israel’s Consul in New York, Danny Dayan. The rabbi of the Kosel and the holy sites, Rabbi Shmuel Rabinowitz, received the governor and read chapter 121 of Tehilim. The governor placed a note between the stones of the Wall.

Rabbi Rabinowitz noted that New York is one of the most prominent Jewish centers in the world and expressed his appreciation to the governor for his friendship with the Jewish people and the state of Israel.