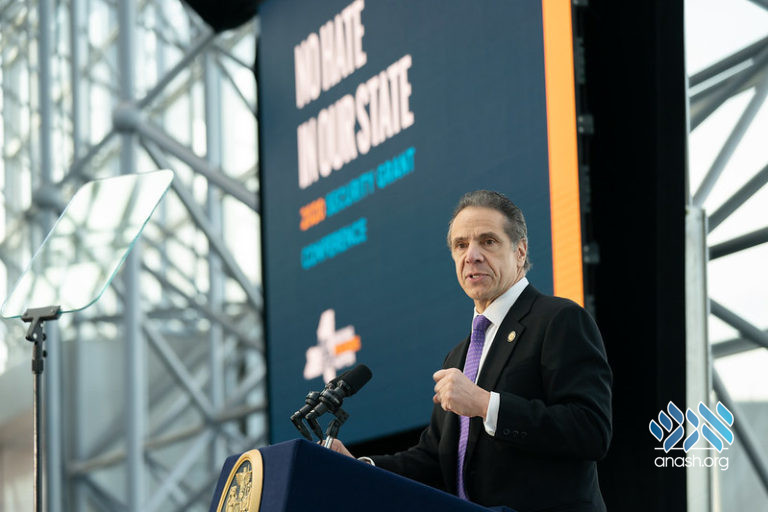 At the inaugural ‘No Hate in Our State’ Conference, Gov. Andrew Cuomo proposed an additional $25 million in security grant funding for Shuls and organizations vulnerable to hate crimes.

Gov. Andrew Cuomo is proposing that shuls and houses of worship be included in eligible buildings for the state’s security grant program.

The legislation, if approved by lawmakers, would not affect the current $45 million in security grants left over from the past two years. It would only go into effect next year, on the $25 million the legislature is expected to vote on in April.

In one incident that sent ripples through the worldwide Jewish community, a neo-Nazi in the German city of Dresden attempted to shoot his way into a shul on Yom Kippur but was blocked by the shul’s security system and reinforced door.

The Democratic governor spoke Thursday morning at the inaugural “No Hate In Our State” security grants conference at the Jacob K. Javits Convention Center in Manhattan, where he about 600 community leaders and clergy met with state public safety officials and security experts.

“An attack on one of us is an attack on all of us,” Cuomo said. “Government’s number one responsibility is to ensure public safety, and these aggressive new efforts will provide religious and cultural institutions the support they need to protect themselves and keep their communities safe.”

Created in 2017, the Securing Communities Against Hate Crimes Grant Program provides funding to strengthen security measures and prevent hate crimes against non-profit day care centers, community centers and cultural museums that may be vulnerable because of their ideology, beliefs or mission. Camps were added to the criteria by Assemblyman Simcha Eichenstein last year.

Since the program’s inception, more than 500 such projects have been supported by $25 million in state funding.

The announcement comes amid a surge of anti-Semitism and hate crimes against the Jewish community.