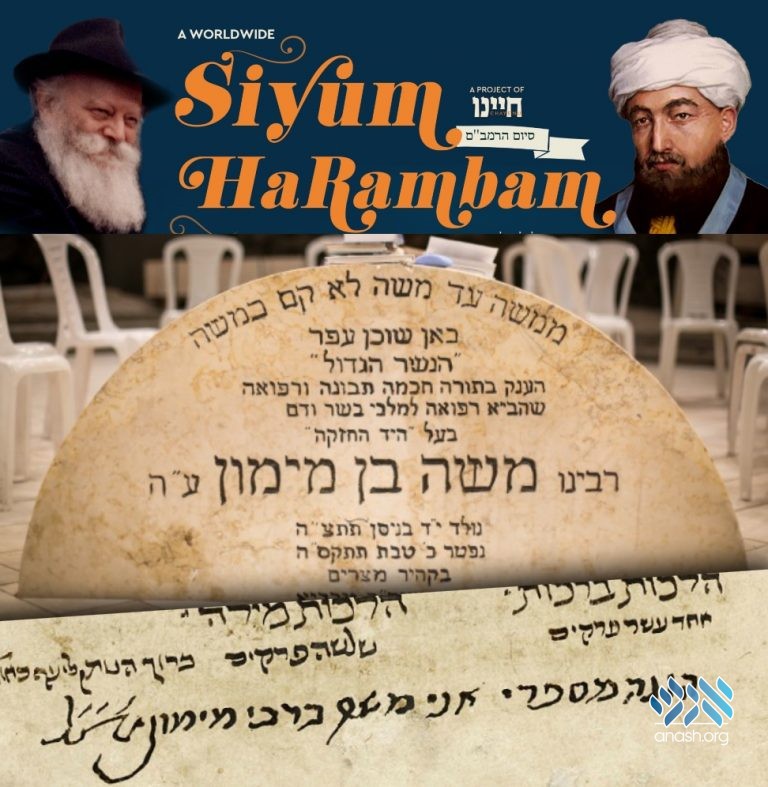 The global Siyum Harambam broadcast by Chayenu will feature an viewing of an original manuscript​ of Mishneh Torah, alongside a live feed from the Rambam’s tomb​ in Tiveria.

The global Siyum Harambam broadcast by Chayenu will feature an exclusive program, including an up-close look at an original manuscript​ of Mishneh Torah.

Join an online ​LIVE ​event, together with thousands of Jews around the world, to mark this special occasion​, streaming at ​www.Siyum.Live

The Rebbe, when launching the campaign to learn Rambam Yomi, explained its purpose: Jewish Unity through Torah.

The Rebbe therefore divided the study into three distinct tracks to enable every Jewish man, woman or child to participate. Alongside the siyum of Mishneh Torah will be a siyum of Sefer HaMitzvos.

The program will be exciting and engaging not only for Anash, but for Chabad Houses and shluchim’s mekurovim too.

The event is being produced by Chayenu, which has become a force and a resource for Daily Rambam Study worldwide. Today, Chayenu has over 22,000 students in over 600 cities across the globe. The range of demographics is a representation of the kaleidoscope of Klal Yisroel: from Lubavitchers to modern orthodox to reform to unaffiliated Jews. The Rebbe’s vision of Jewish unity has come to life.