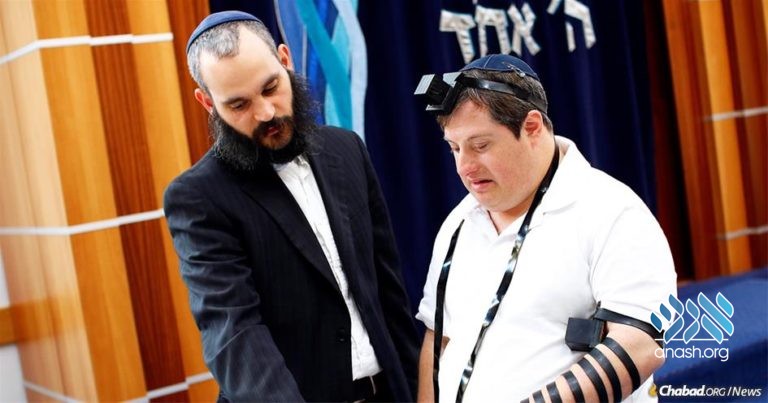 Over 600 locations worldwide hosted ShabbaTTogether gatherings this past weekend, emphasizing the importance of inclusion within Jewish communities.

By Rochel Schwartz for Chabad.org

Combining the spiritual beauty of Shabbat with classes, workshops and panel discussions at 600 locations around the world, this past weekend’s ShabbaTTogether gatherings, coordinated by the Ruderman Chabad Inclusion Initiative (RCII), highlighted the vantage point of people with disabilities and mental health conditions, as well as emphasized the importance of inclusion within Jewish communities worldwide.

“Manya Lazaroff spoke beautifully about what inclusion means and how inclusion is such a Jewish concept, being that Judaism is all about unity and connection,” Pfrenger tells Chabad.org. She thought it was special that a group of Jewish college students from Stony Brook on Long Island, N.Y., traveled all the way to College Station to take part in their ShabbaTTogether. “It added to the feeling of unity. I’m really glad I got to participate in such a unique event.”

Explaining that she believes that mental health awareness is “the call of the hour,” Manya Lazaroff says that the resources that RCII provided her with gave her the tools to create lasting impact in her community of college students, opened up a vital dialogue and created a space for students to begin connecting and sharing. She is also currently working on a program called “ReJOYvination 360,” to break the stigmas surrounding mental health.

“Our initiative is about taking student wellness and mental health seriously,” says Lazaroff. “We have a local psychologist who is a consultant for this initiative, and a board of students who decided to get involved as a result of their life experience as well as their knowledge of the challenges that their felow students face on a daily basis.”

Lazaroff notes that Chabad at Texas A&M has already held Mental Health First Aid (MHFA) training for the students, and they are looking forward to a Safetalk workshop in the fall. She says that her goal is to empower students to continue learning and to open up about this vital topic. “We want our students to be educated on not just physical disabilities, but the ‘invisible disabilities’ that affect college students across the globe. The ‘ReJOYvination 360’ program is a multifaceted initiative that will include workshops, dinner and discussions, and other educationally enriching programs to help our students learn how to be ‘first responders’ when it comes to mental health.”

In Houston, ShabbaTTogether began with a Friday-night dinner led by Rabbi Chaim Lazaroff, co-director of Chabad of Uptown with his wife, Chanie, for young professionals and young adults with disabilities from the local Friendship Circle. On Shabbat day, Rabbi Dovid Goldstein, director of Friendship Circle in Houston, spoke about the idea and importance of inclusion. On Sunday, an eight-hour course trained people in Mental Health First Aid.

Bill Coorsh’s daughter Jodie is a member of Chabad’s Friendship Circle. He lauds Rabbi Dovid Goldstein and Rabbi Zally Lazarus, Director and Assistant Director of Friendship Circle of Houston for integrating special needs individuals into their programs and events. “The Shabbat Together event, hosted by Chabad of Uptown was fabulous,” he says. “Rabbi Lazaroff and Rebbetzin Chanie know Jodie and always make her feel comfortable and welcome. It’s really great to see such love and integration of the special needs individuals within the Chabad community here.”

On Long Island N.Y., Rabbi Anchelle and Bluma Perl, co-directors of Chabad of Mineola, led a ShabbaTTogether weekend in which they hosted a Havdalah ceremony with guest speaker Dr. Stephen Shore, a professor of special education at Adelphi University who is autistic, and travels the world lecturing on the subject.

In Miami, the ShabbaTTogether program began at the Friendship Bakery, where young adults living with disabilities are empowered to make and sell their own baked goods with the help of professionals and volunteers. The baked goods produced were be enjoyed at the Shabbat dinner.

Topics such as “The Theory of Inclusion, Human Worth and Dignity” and “The Thing About Normal” were addressed head-on. The intention was to spark conversations and open up new avenues of dialogue for adults and teens with disabilities and mental health conditions to feel physically and mentally supported at the Jewish communal institutions they attend.

“Our main goal in creating the ShabbaTTogether weekend was to start the conversation on inclusion,” says Dr. Sarah Kranz Ciment, director of the RCII. “The truth is inclusion is not a weekend thing. It’s a mindset shift, a way of living and leading. Our goal is to get the conversations started and to turn inclusion from a daunting task and a largely misunderstood topic into a manageable, attainable goal.”

Kranz-Ciment says that the feedback she’s received from last year’s ShabbaTTogether was overwhelmingly positive. “Since then, I’ve been hearing beautiful sentiments about how Chabad institutions worldwide are actively leading in bringing awareness to disabilities and mental health conditions within their communities.” One such example, she shared, is the way in which a Chabad rabbi offers to pray for his congregants with mental-health conditions during the Mi Shebeirach prayer that he recites every Shabbat.

The event brought together those who make up the special-needs community, concentrating on creating a mindset of inclusivity and practical ways to help people living with disabilities feel welcome and supported.

Deepening global awareness and spreading information on inclusion is something that Kranz Ciment hopes will expand from year to year. This year’s ShabbaTTogether aimed to specifically focus on mental health awareness.

“Mental-health conditions most definitely affect a large part of the lives of people who deal with them,” she explains. “The reason I don’t say ‘suffer’ from a mental health condition is that that expression itself victimizes and stigmatizes people. Many people who have such conditions actually live extremely empowered, uplifted lives.”

Chaya Howel, a college student from Valencia, Calif., who is associated with both Chabad of the University of Southern California (USC) and Chabad of California State University, Northridge (CSUN), shared that as she’s gotten to know Chabad more, she’s embraced the fact that her mental-health condition isn’t something to be ashamed of. She notes that Jewish mysticism has so many powerful tools to help people create positive thinking.

“The loving approach of Chassidism, together with medication and therapy, has really healed me,” she says. “I’m the happiest I’ve ever been. ShabbaTTogether is especially meaningful to me. It makes a statement that people with disabilities and mental health conditions have a strong place within the Jewish community.”

“ShabbaTTogether” is a project of the Ruderman Chabad Inclusion Initiative.