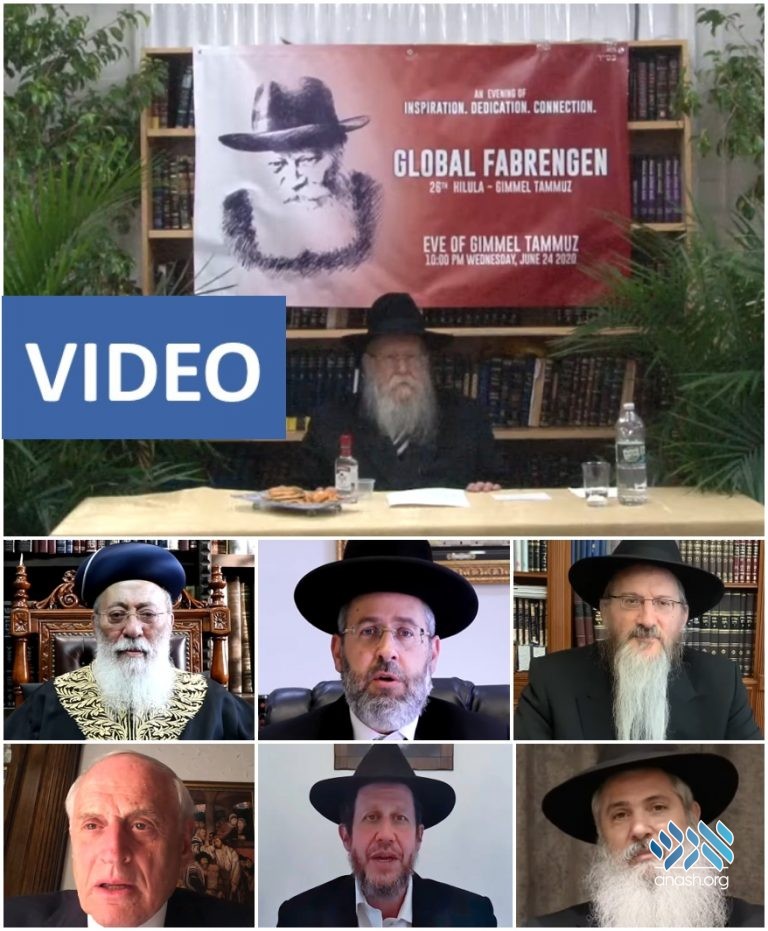 With the effects of the lockdown still lingering, and many unable to travel to the Ohel for Gimmel Tammuz, Tzeirei Agudas Chabad Hamerkozis organized a virtual global farbrengen, addressed by well-known rabbis and dignitaries.

With the effects of the lockdown still lingering, and many unable to travel to the Ohel for Gimmel Tammuz, Tzeirei Agudas Chabad Hamerkozis, the Lubavitch Youth Organization organized a virtual global farbrengen broadcast from the Ohel.

This unique farbrengen, dedicated to “Inspiration. Dedication. Connection.” was addressed by world renowned speakers and drew a huge audience of participants from across the globe.

The chairman of the event Rabbi Shmuel Butman, director of Lubavitch Youth Organization, began by pointing to the auspiciousness of the Zeman uMokom, time — eve of Gimmel Tammuz and place — the Ohel.

Rabbi Butman noted that the Midrash compares our forefather Avraham to the “Leader of the generation and the captain of a boat.” A captain carries a personal responsibility for every single passenger, and won’t leave the boat to safety until he is assured that every single passenger is safe. “Prophets of doom predicted that it’s over for Lubavitch. We continue to see, however, the G-dly leadership and inspiration of the Rebbe. Not only has Lubavitch not diminished, it has grown with leaps and bounds.”

To set the tone for the farbrengen, a video was streamed of the Rebbe singing Tzama Lecha Nafshi, “My soul thirsts for You.”

After pouring a l’chaim, and asking all participants to do the same, Rabbi Butman introduced  Rabbi Shlomo Amar, Chief Rabbi of Yerushalayim and former Chief Rabbi of Eretz Yisrael. Rabbi Amar spoke how the Rebbe lifted the entire generation and worried for every single Jew, regardless of his or her background. As an overflowing spring, the Rebbe constantly had novel explanations in Torah and ideas how to lead and inspire the Jewish people. Witnessing the continued growth even after Gimmel Tammuz, the only explanation is Hashem’s blessing.

Rabbi Amar recalled the mesiras nefesh of the Rebbe’s emissaries to Morocco, Rabbi Shlomo Matusoff, Rabbi Yehudah Leib Raskin and Rabbi Shalom Eidelman, who passed away from the pandemic just recently, still engraved in his memory from his childhood from when he studied in the Lubavitch school system in Casablanca.

Next to address the farbrengen was Rabbi Berel Lazar, Chief Rabbi of Russia. To illustrate the power of a farbrengen, he related that the Rebbe once requested a group of chassidim who had recently escaped from the harsh conditions in the Soviet Union to visit Rabbi Moshe Feinstein. It was shocking to see full-bearded Torah scholars, who made sure to fulfill mitzvos in the best possible way. Rabbi Feinstein asked them what kept them so strong, and one of them responded that it was the chassidic farbrengens that held them steadfast.

“What does a farbrengen provide us? More than just hearing Torah ideas and inspiration to do more, by saying l’chaim together, we actually become united as one. We stand for one Hashem and one Torah. Deep down, we are all one, and we connect to each other by connecting to the Rebbe. It’s not about us or our own ego, it’s about the Rebbe. This togetherness is stronger than any difficulties and enables us to surmount any challenges.”

Rabbi David Lau, Chief Rabbi of Israel, spoke of his amazement of the Rebbe’s greatness. “How did one person manage to do everything he did, and at the level he did it?” The question only grows the more one looks at the Rebbe’s hundreds of volumes containing letters of advice, deep insights in all areas of Torah scholarship, and his love to every single human being. Rabbi Lau recalled reading how the Nazis sent a boat to fetch a single Jew from an island and send him to Auschwitz. He thought to himself that indeed, the measure of goodness must be even greater. The Lubavitcher Rebbe would send an emissary to that single Jew on the island, not to fetch him and bring him to a Jewish community, but to stay with him there and teach him!

Rabbi Butman then called upon Rabbi Yitzchak Schochet, Rabbi of the Mill Hill Synagogue, London, and one of the rising stars on the rabbinical horizon, to address the farbrengen. “The Rebbe taught us time and again, every obstacle opens doors, and every challenge enables us to expose latent potential. When we are physically at the Ohel, the holiest of sites, one feels an obvious and immediate connection. When we aren’t there physically, we may have to dig a little deeper, but the ability to feel the bond with the Rebbe is there in the same way.”

Rabbi Schochet continued to explain the lessons we can derive from the “New Normal,” after Covid-19 brought a paradigm shift in civilization. “Everyone has come to recognize that no matter how influential we may be, it’s not about us. As by the travels in the desert, the stops and starts of life are entirely dictated by Hashem. The challenge for us, as defined many times by the Rebbe, is to make sure that wherever we are, we make it a true dwelling for Hashem. We shouldn’t see obstacles as stumbling blocks but as stepping stones.”

Rabbi Butman reminded everyone of the opportunity to join the global collective study of the Rebbe’s teachings at GimelTammuz.com, the sure way that we can connect ourselves with the Rebbe as the Rebbe clearly told us.

Rabbi Moshe Bryski, Shliach, Agoura Hills, California, shared several stories that depicted the Rebbe’s devotion to every single Jew. “Back in 1950s, a group of college students had an audience with the Rebbe. One of them asked the Rebbe what is his job description. The Rebbe pointed to the light switch and explained: The light bulb is connected by wires to an electrical generating station that powers the whole of Brooklyn, which is in turn connected to generators at Niagara Falls that power the whole of New York State. Every one of us is endowed by G-d with a divine soul that is connected to the infinite Source of all energy, but the connection has yet to be made, and it is hard to find the switch in the dark. My job is to help every single Jew find his or her switch and help turn on his or her light.”

The final speaker was Malcolm Hoenlein, Executive Vice President, Conference of Presidents. In introducing Mr. Hoenlein, Rabbi Butman recalled that when he told him about the six speakers of the farbrengen, Malcolm Hoenlein said: “So it will be three Chief Rabbis and three Lubavitchers.”

In his remarks Malcolm Hoenlein stated: “The Rebbe consistently sought to direct us to what was truly important, not the transient philosophies of the day. Now, it has become more and more clear, from Bangkok to Beijing, everyone knows that there is an address to go to, to help them identify, to find a kosher meal. The Chabad houses are sanctuaries of warmth and kindness. At the core of many of the Rebbe’s teachings is the call for achdus, unity.  When we embrace one another, ufaratzta yama vakeidma… we spread out in all directions. We have come to realize how much we need the community, and how much the community needs us. What we have uncommon truly outweighs any differences.”

Malcolm Hoenlein related an audience he had with the Rebbe, when he requested a blessing for his father who was very ill. Repeatedly throughout the audience, the Rebbe responded, “May your father continue to have much nachas from all the good work you do.” “The Rebbe was holding my hand and smiling. At the conclusion of the audience, when I asked one final time, the Rebbe put my hand down, stopped smiling, and said the same thing while staring at me”. Malcolm understood the urgency to spend the final moments with his father and went straight to Philadelphia where his father passed away that night.

Rabbi Butman concluded the farbrengen with the last words of the Rebbe in the first Maamar on Yud Shvat 5711 -1951 “and we should merit to see the Rebbe here below in a physical body and he shall redeem us,” and the singing of “We Want Moshiach Now” at a Farbrengen of the Rebbe.