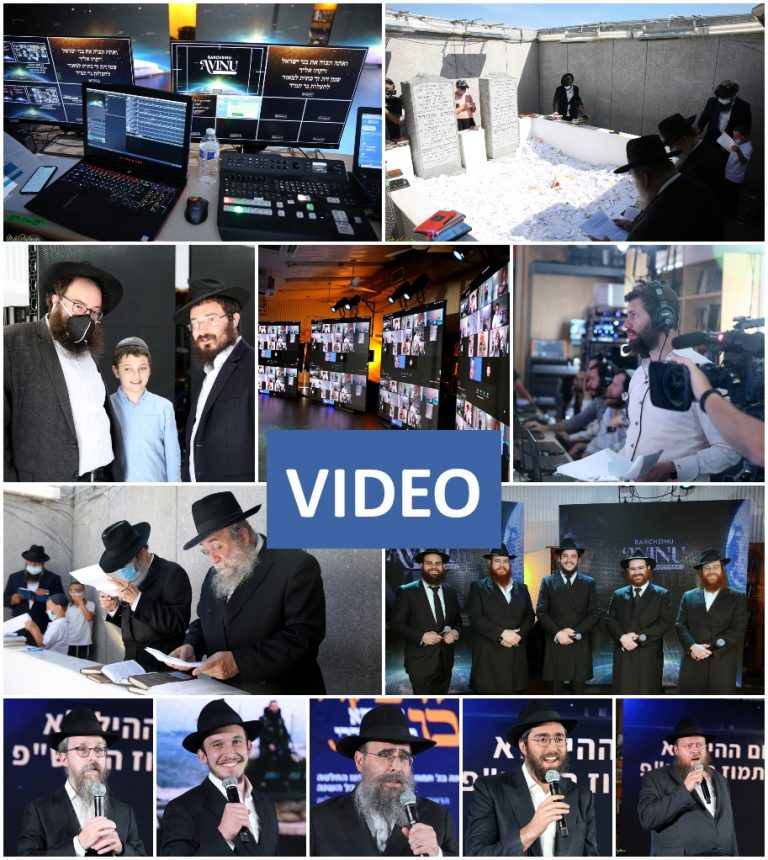 Hundreds of thousands of chassidim joined a global event marking Gimmel Tammuz, broadcast live from the Rebbe’s Ohel as coronavirus prevented many from coming in person.

Yesterday, hundreds of thousands of chassidim joined a global event marking Gimmel Tammuz, broadcast live from the Rebbe’s Ohel as coronavirus prevented many from coming in person. The event was followed by 24 hour broadcast of shiurim and farbrengens

Now the organizers, who worked for many weeks to arrange the event, are asking you to do YOUR part in making this global 24 hours of hiskashrus a reality by clicking here: www.BarcheinuAvinu.com/Charidy

Since the immediate effects of the worldwide coronavirus pandemic began curtailing social interactions, Zoom has become the medium of choice for virtual meetings large and small. Yet, even the Zoom staff had never helped put together an event as large as the inspirational gathering held yesterday in advance of 3 Tammuz, the 26th anniversary of the passing of the Rebbe.

All told, approximately 45,000 devices (each one with multiple viewers) logged on to 26 interconnected Zoom meetings, each one representing a Jewish community or region around the world, for a unique blend of prayers, Torah study, storytelling, song, and inspiration. With an estimate of two to five people watching on each device—as households were watching together—organizers believe that the total number of attendees was well above the predicted 100,000 mark, although definitive numbers, beyond the number of devices, are difficult to come by.

The vast and growing numbers of people commemorating the Rebbe’s legacy 26 years after his passing is due, at least in part, to the ever-growing engagement with the Rebbe’s vast body of scholarship and teachings.

Recent years have seen a large amount of scholarship, both academic and popular, dlving into the Rebbe’s teachings. Among them are Toras Menachem—the 68th Hebrew volume was released recently—the new bi-lingual edition of Likkutei Sichot, academic books such as Social Vision and popular works like Positivity Bias and Wisdom to Heal the Earth, which, together with videos, websites, social media and new Chabad-Lubavitch centers around the world, have made the Rebbe’s profound message for humanity more accessible than ever.

The Zoom event, dubbed “Barcheinu Avinu,” the broadcast was coordinated by the Vaad Or Vechom Hiskashrus, a division of Igud Hashluchim dedicated to providing Chassidic inspiration and educational programming to Jewish communities around the world.

“This was the world’s largest interactive Zoom event,” said producer Ronen Peled, explaining that each community joining from North America, South America, Europe, Israel and South Africa hosted a Zoom room, which were then connected to the central broadcast, based out of the visitors’ center near the Ohel, the Rebbe’s resting place in Queens, N.Y.

On an ordinary year, as many as 50,000 visitors come to the Ohel on and around the anniversary. For many, however, this event recreated the experience for them, as they saw the faces of people from around the globe, heard insights from leading chassidim, and experienced a vicarious visit to the Ohel itself.

Attendees were from around the world, including East Asia, where participation entailed logging on well after midnight.

The event, which also featured speakers from around the world, was not without logistical difficulties—notably, that Zoom meetings are generally restricted to 1,000 participants per meeting, and organizers welcomed dozens of groups of up to 1,000 onto their online presence.

All in all, the event went remarkably smoothly, with the giant screens behind the live presenters showing “gallery views” of the various zoom meetings, which allowed people to grasp the magnitude of the event.

For many, the highlight was watching a pan, a traditional letter requesting blessings, that had been virtually signed by the participants, read on their behalf at the Rebbe’s actual resting place.

Presenters also included the children of several families from the US and Europe who had been impacted by the Coronavirus pandemic and the program also included a musical presentation from Cantor Berel Zucker, whose 39-year-old wife, Raizel, recently passed away, leaving him to raise their eight children, the oldest of whom is still a teen.

And in the spirit of the Rebbe, for whom every interaction and event had to lead to positive change, the event concluded on a practical note. Participants were encouraged to sign up to be paired with a (remote) study partner with whom to learn a portion of the Rebbe’s Torah teachings.

“Our focus is always to strengthen people’s connection to the Rebbe,” says Rabbi Levi Slonim, a Chabad emissary to Binghamton and a member of the organizing committee. “This year, we needed to dig deeper and be more creative in order to accomplish our goal, but thank G‑d, the event was deeply moving and the sheer magnitude of it was breathtaking.”

Do YOUR part in making this global 24 hours of hiskashrus a reality by clicking here: www.BarcheinuAvinu.com/Charidy